Beach Life is one of the most popular and famous slot machines in the entire online casino industry. This might seem strange at first, since the graphics and bonus rounds contained within the game aren’t anything to write home about. However, there’s really just one reason that Beach Life has gained such a following: The incredible progressive jackpot attached to the game, which could potentially award you one of the largest prizes in the gambling world. 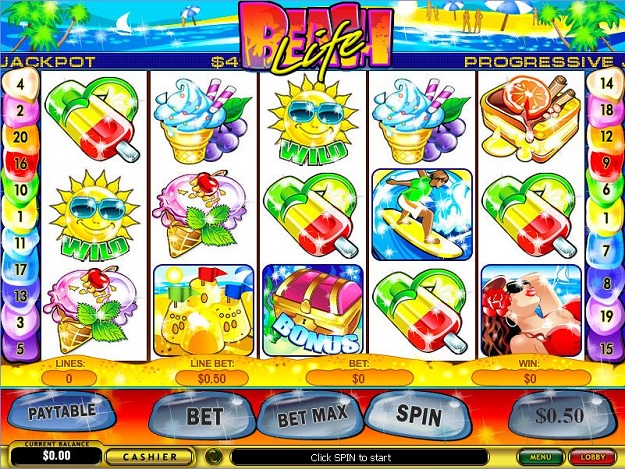 Beach Life is a 20-line, five reel slot machine that is available at most Playtech casino sites. As with some other jackpot games, players do not have control over the amount they bet per line; while this amount does vary depend on the currency you’re playing in (and has changed over time), we’ll speak in terms of dollars throughout this article, and use $0.50 as the standard line bet. This means players can wager as much as $10 per spin if they wish to do so.

In Beach Life, the goal is to match like symbols from left to right consecutively across the active paylines. Players win prizes by making matches, with the type and number of symbols match determining the size of each prize.

The lowest value symbols are based on food items – popsicles, ice cream, and other popular summer treats. Higher value symbols include a surfer, a sunbathing woman, and a snorkeler, who provides the largest “normal” prizes on the reels.

But Beach Life isn’t really about the typical slot machine wins you’ll hit by matching standard symbols on the reels. Instead, the goal is really to hit the special symbols that contain much larger prizes (which is what makes Beach Life one of the most popular online slots). The first of these is a scatter symbol, represented on this machine by a sandcastle. Should you hit two or more of the sandcastles anywhere on the reels, you’ll win a prize that’s a multiple of the amount you’ve wagered on that spin. If you hit five sandcastles, you can win a total of 500 times your original bet – up to $5,000 total.

Another important symbol is the sun. The sun substitutes for any of the regular symbols (but not the scatter symbol or the bonus symbol, which we’ll talk about more in a moment), completing winning combinations on active paylines. However, the sun symbol can also win huge prizes on its own if you can match more than one on the same line. In fact, hitting five suns makes you eligible for the most valuable prize of all in Beach Life: the progressive jackpot.

Finally, there’s also a bonus symbol (a treasure chest) that can activate a bonus round. We’ll talk more about the bonus game below.

Theme and Presentation in Beach Life

Beach Life has a theme based around – you guessed it – the beach. All of the symbols are designed after things you might do on the beach in the summer: eating ice cream, surfing, sunbathing, and so on. As a whole, the graphics are fairly basic, but they are bright and have a certain intensity to them; they’re very stylish, presenting the icons in a flashy manner rather than a more “realistic” drawing style. The colors are all bright and bold, which is refreshing if you find yourself playing this game somewhere cold, longing for the days of summer.

Here’s where things get really exciting. Of course, Beach Life has some fairly high normal payouts; you can win up to 500 coins ($250) for five snorkelers, or 500 times your total bet by hitting five of the sandcastle scatter symbols anywhere on the reels.

But the real prize is attached to the wild sun symbol. This symbol not only acts as a substitute, but can win prizes on its own – up to an incredible 100,000 coins ($50,000) if you should hit five on the same payline.

And that’s still not the largest prize in this game! If you should play the full 20 paylines, and hit five of the wild sun symbols on the 20th payline, you’ll win the Beach Life progressive jackpot. This jackpot is among the biggest prizes you’ll find anywhere in a casino, live or online. At the time of this writing, the jackpot has yet to be won, and currently has value of over $6.5 million!

While the jackpot is going to be the feature most players are most concerned with, there is also a bonus round that can be activated by hitting three or more Bonus treasure chests on the same active payline. In this game, you’ll be moved to a second screen to play a Sunken Treasure bonus round. Essentially, this is a pretty standard “click one” game, where you’ll pick a treasure chest and reveal a prize amount. The prizes awarded during the bonus round are fairly generous, though, especially if you’re playing for the maximum number of lines available.