Baywatch is a colourful, beach-themed 5-reel, 30-line slot from Playtech. The game is themed around the action TV drama that ran for over a decade in the 1990s. It starred David Hasselhoff as Mitch Buchannon and made a star of the super-sexy Pamela Anderson. The show revolved around the lives of a group of lifeguards on a Californian beach who patrolled the sands looking buff in their super-sexy red beachwear, and who developed a habit of running in slow motion. 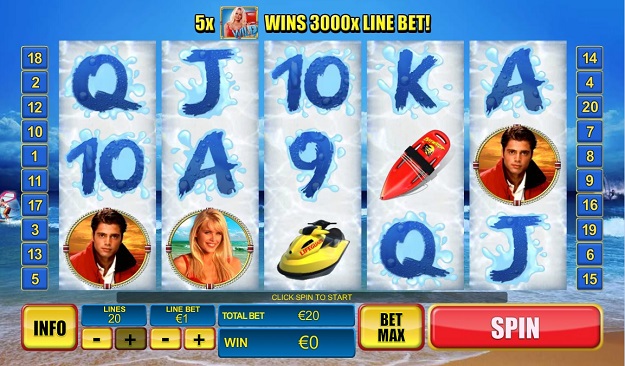 The symbols used in this cartoon-style game are playing card values jack to ace, some scenes taken from life at the beach and a handful of stars from the show including the lovely Pam herself, as ‘C.J. Parker’.

The game has a decent total of thirty pay lines and all are selectable, so you can choose as many lucky lines you want to play with at all times. You can also choose your stake-per-line from 0.01 to 25.00 – your final wager is always your coin value multiplied by the number of lines you want in play. This gives you a range of bets from 0.01 to a whopping 750.00.

Once you’re happy with your stake, just hit the spin button. There are a number of pay outs you can hope to achieve, and you win cash in normal play by landing at least three identical symbols in sequence from the left-hand reel on one of your active pay lines.

The lowest payout is for three jacks which wins you back your stake-per-line. The jackpot is for five sun-drenched lifeguard huts, which will have you smiling at 1,000x your wager.

Wild Symbol: The wild symbol is simply the word ‘Wild’ and substitutes for all other symbols aside from the scatter. Note that the wild symbol does not appear on the second reel.

Speed Boat Wild: This symbol can be activated at any time during normal play. It occurs on the middle reel only and when the hidden wild reel set is activated. When you land this wild the middle reel will vanish and a speedboat will race through the gap and splash water all over the screen, turning the entire middle reel wild and a random number of other symbols wild.

Scatter Symbol: A life ring acts as the scatter symbol. Every time you land one of these symbols, the ring jumps off and collects in a basket at the side of the reels, and cash is added to one of the three progressive payouts available – rescue child, rescue woman and rescue man.

Free Spins Feature: You win free spins when three or more scatter symbols appear on the reels at the same time. You are awarded ten free spins for three scatters, fifteen for four and twenty for five.

During each spin a number of the rings you’ve collected so far will jump onto the reels. If they land on one of the three ‘rescue’ symbols the meter underneath that symbol’s payout indicator rises one level.

You need three rings to rescue the man, four to rescue the woman and eight to rescue the child. If you succeed, you win the progressive payout that you’ve amassed so far. If you fail, then the jackpot remains the same in readiness for your next attempt.

This is a very nicely-worked game from Playtech with some unique and interesting features. The ‘rescue’ side game is a lot of fun and genuinely does become a little bit nail-biting if you’ve managed through repeated play to amass a ton of cash in the progressive cash pots. Once you’ve gained your free spins the landing of the rings on the reels adds a nice new dimension to the game.

Why not hit the beach and take the Baywatch slot out for a spin? You might win enough cash to treat yourself to a beach holiday!