Cinerama is a progressive jackpot video slot game from Playtech. As its name suggests, it is about movie-making, but it is set in the studios of the middle 20th century, before the use of digital technology. In the background to the reels you can see the director, cinematographer, and male and female actors in action. 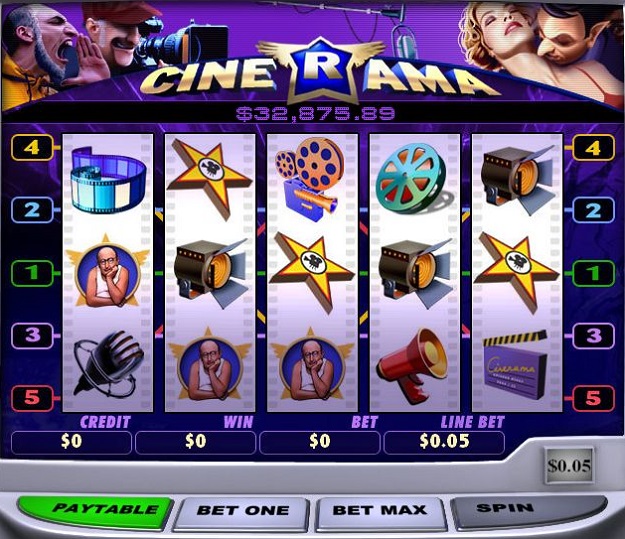 The symbols on the reels are all from the shooting of movies. These include the old movie projector, the printed script, the clapper board used to indicate the beginning of a shot, the film reel, the megaphone used by the director to give instructions, the film, the star reflecting the leading actors’ star status, the spotlight and the microphone. Some of younger generation of online casino players may not have seen some of these items. All these symbols award line payouts when they occur in successive reels from left to right in active paylines. Some symbols start paying from two of a kind, whereas others start paying from three of a kind.

Cinerama is a five paylines video slot. Contemporary slots will not have so few paylines. But remember, Cinerama is a trip down memory lane. You cannot afford to play without activating all five payline, because each payline provides 20% of the winning opportunities and you cannot hit the progressive jackpot unless all paylines are enabled. The line bet is fixed at 0.05 and the total bet per spin with all paylines is 0.25. Cinerama is a slot game essentially for low rollers. The largest line payout of 10,000 coins will result in a win of 500.00 and the next largest line payout of 1,000 coins will pay only 50.00.

Scatter Symbol: The headphone is the scatter symbol. It does not award any payouts, but only acts as a trigger for the Box Office bonus feature. In most video slots you need three or more scatter symbols to trigger the bonus feature. But in Cinerama, the Box Office feature is triggered when the headphone symbol appears anywhere on reel 1. The titles of the four movies releasing this week are displayed. You have to pick the one you think will set the record for the weekend box office earnings. You are awarded a bonus in proportion to the performance of your chosen movie at the box office.

Bonus Symbol: The director is the bonus symbol. It also does not award any payouts. Three or more director symbols appearing left to right on an active pay line trigger the Movie Director bonus feature. You take on the mantle of the director and select the leading man and the leading lady for your movie. You will be paid a bonus based on your choice. In the next stage your movie is sent to the Oscars and you win another bonus based on how well it is received.

Cinerama is an old fashioned slot game, but is still popular at Playtech online casinos because it has a progressive jackpot that offers significant wins.