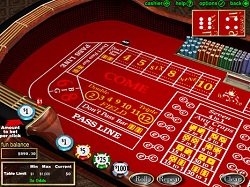 Craps is one of the most action-packed casino games, which has made it a game that’s popular both among experienced gamblers and those who hit up the casino for a social experience. The whole table usually wins (or loses) together, making it a fun experience for everyone involved – especially when things are going well!

Online craps follows all of the same rules as live games, and while there’s no social element, it’s still a worthwhile game to try. Playing craps for real money gives you access to some of the best odds of any casino game, including one bet that actually has no house edge – something you’re unlikely to find anywhere else.

Where to Play Craps Online

Craps is popular enough that nearly every online casino offers it. At most casinos, it will be classified under table games, while others will put it in a specialty games section. Since craps games are similar in most respects, the biggest place where a game can stand out is in the amount of odds it will let you take behind the pass line. At online casinos, this can range anywhere from 2x the pass line bet to 5x or more. If you want to get the most from your money and are willing to bet big, the higher the allowed odds, the better the game is for you.

How to Play Craps

Online craps may appear to be a complex game. It certainly has a larger variety of bets than almost any other casino game on the planet; this can be very intimidating for new players, who will only see money flying around the table, seemingly at random. On the other hand, the basics of craps are rather simple, so getting started in real money online craps is not so hard.

The game is played using two standard dice. One player, known as the “shooter,” throws the dice down the table, and the total of the two dice are taken (for some side bets, the individual die numbers are important, too).

If players make a pass line bet, they also have the option of taking the odds when a point is rolled. When this occurs, players may bet more money behind their pass line bet; the additional money also wins if the point is rolled before a 7. However, this money will pay out at odds that are entirely mathematically fair, based on the true odds of each point being rolled before a 7. The odds offered vary by what the point is, and are as follows:

Don’t pass players also have the option to “lay the odds,” taking the opposite odds that a seven will be rolled before the point. In both cases, the table will usually clearly state how much money you will be allowed to wager when taking/laying the odds; the amount is a multiple of the pass line bet you originally made, and can range from 1x to 100x.

There are also many other bets you can try making when playing craps online for real money. Here are some of the most popular.

These bets are similar to taking the odds; you make a bet on any point number, and you win if the number is rolled before a 7. The difference is that these bets can be made at any time you like. On the other hands, the odds are slightly worse than when taking the odds.

Buy bets are basically the same as place bets; however, they pay out slightly differently. These bets ostensibly pay the same as when you take the odds; however, the casino takes a commission, either up front or (better for the player) after the bet wins.

A put bet is a pass line bet made after the come out roll. These usually carry high house edges, as you can no longer win immediately on the come out roll. However, this bet does allow you to take the odds behind it, which is beneficial.

These bets allow the player to bet that a 4, 6, 8 or 10 will be rolled using a pair of the same number (for instance, a hard 8 is a 4-4 combination) before either a 7 is rolled, or that number is rolled in another manner.

Other Prop Bets: Many other prop bets are available for players who want to wager on the outcome of the next roll. Players can bet on a seven being rolled, specific numbers that are hard to hit (2, 3, 11 and 12), or any craps (2, 3 or 12) being rolled.

If you want the best odds possible when playing craps, the best way to play is to stick to some of the most basic bets and avoid the more exotic wagers. Essentially, this means making either the pass or don’t pass bets. The pass line bet has a house edge of 1.41%, while the don’t pass bet has a slightly lower edge at 1.36%. The only downside to playing the don’t pass bet – and it can be a significant one – is that you’ll be betting against most of the players at the table; in a live game, that can be a problem. However, in an online craps game, this isn’t an issue.

Either way you choose to play, you’ll want to take the maximum odds allowed at the table behind your bet. This is because taking or laying the odds carries absolutely no house edge, which makes the game essentially a coin flip with the casino in the long run. Combining the pass line bet with a fairly typical 3x odds creates a combined house edge of .47%; the same 3x odds behind a don’t pass bet drops your house advantage to .34%. Either way, this puts craps on the same level as blackjack and video poker as having some of the best odds available in any real money casino game.