Where to Play Online Roulette

How To Play Online Roulette 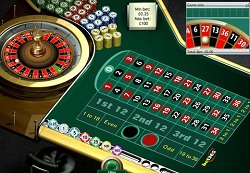 Roulette is a fairly simple game, and if you’ve ever played it in a live casino, you’ll have no problems playing online roulette for money.

For those unfamiliar with roulette, the game is played with a wheel that has various sections numbered from 1-36, along with one or two zeroes (depending on which version of the game you’re playing). A dealer – properly called a croupier – spins the wheel and places a roulette ball on the outer rim. The ball will spin around the wheel, eventually falling into one of the numbered sections.

The object of the game is for the player to predict where the ball will land. There are dozens of different bets available to the player; they can specifically guess one number that the ball might land on, or they can take a group of numbers and hope that any of those numbers are hit on the next spin. Here’s a rundown of the various bets available in real money online roulette:

Single Number: This bet covers just a single number, and pays out at odds of 35-1 if that number is hit.

Split: This bet covers two adjoining numbers on the table, and pays out at 17-1 if either number is hit.

Street: This bet covers a row of three numbers, and pays out at 11-1 if any of those numbers are hit.

Corner: This bet covers a “square” of four numbers, and pays out at 8-1 if any of those numbers are hit.

Six Line: This bet covers two rows of three numbers each, paying out at 5-1 if any of those numbers are hit.

Top Line: This bet is only found on American Roulette tables, and covers the numbers 0-00-1-2-3. It pays out at 6-1 if any of those five numbers are hit.

The above bets are known as inside bets. The following bets are “outside” bets, which cover more numbers and pay out at lower odds:

Column Bets: These bets cover one column of 12 numbers, and pay out at 2-1 if any of those numbers are hit.

Odd/Even: These bets over all 18 odd or even numbers, respectively, and pay out at even money if an appropriate number is hit.

Red/Black: These bets cover all 18 numbers that are colored red or black, respectively, and pay out at even money if an appropriate number is hit.

As we mentioned above, there are two different types of real money online roulette to choose from. American roulette is played with two zeroes on the wheel (0, 00) while European roulette only has a single zero (0). Many European roulette games also use the “en prison” rule, or variations thereof, which apply when the player makes an even money bet and the ball lands on the zero. In some cases, the player will only lose half of their money instead of the entire bet; in others, the bet is “imprisoned” and can be released back to the player if the next spin would be a winner for that bet.

The best odds on a roulette table are to play directly on each number, rather than splitting your chips between two numbers, or on a corner of four numbers. Each time you split, the odds get worse. For example, a winning bet on a single number pays 35:1. However, if you had split that chip across two numbers, your payout would be 17:1 – not 17.5:1, which would be equal to a 35:1 win on a single number. Then, a winning bet on a corner of four numbers pays out 8:1, which is equivalent of a 32:1 payout on a single number. So, if you’re looking for optimal play, don’t split your chips across multiple numbers on the field.

The one exception comes in American roulette. In American roulette, the house edge is 5.26% – or to be exact, 2/38. The odds of every bet are calibrated to be fair were there only 36 numbers on the roulette wheel. However, the extra numbers – the zeroes – tilt the odds in the casino’s favor, and provide the house edge. As we said, there’s one exception to this; the bet on the number combination 0-00-1-2-3 actually has a larger house edge of 7.89%.