Pink Panther is a 5-reel 40-pay line online slot from Playtech. The star of this purrfectly-pink slot is the Pink Panther himself, one of cinema and TV history’s most unique and long-lasting creations. Our pink-loving pussy made his début as a pre-credit cartoon before the 1963 movie ‘The Pink Panther’, which starred Peter Sellers as the eternally hapless Inspector Jacques Clouseau.

The cartoon critter ended up being so popular that he was handed his own starring role in a TV cartoon series, which began in 1969 and continued in various formats until 2010. Now the purr-fectly prim panther is back with his own Playtech-pink online slots game. 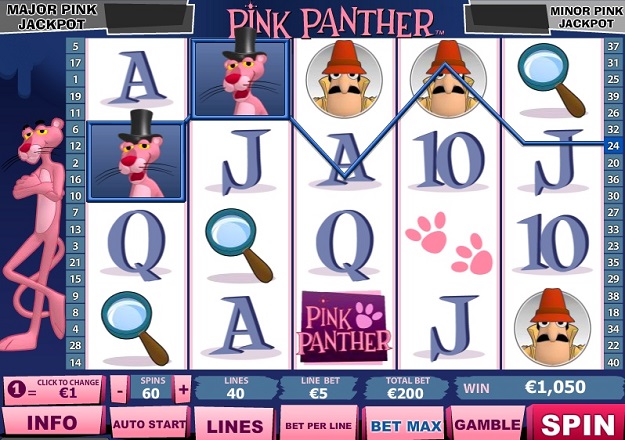 The symbols in this game are the playing card values ten to ace, plus characters from the classic version of the Pink Panther cartoon that UK-players over forty will remember from Saturday tea-times, although Pink and co seem to have been given a slight contemporary makeover.

To win a cash prize, all you need to do is land at least three identical symbols on one of your active pay lines form the left hand reel. You can win anything from x10 your bet-per-line for three tens, jacks or queens, all the way up to 5,000x for five of our lovely pink hero.

You can also really be in the pink when it comes to the Pink Panther slot with one of two mystery progressive jackpots. These are triggered randomly during the game when you are taken through to The Jackpot Adventure (see below).

Once you’ve set your wager, just hit the big pink ‘Spin’ button and see if you can win any purr-fect prize!

Wild Symbol: Out favourite pink feline acts as the wild symbol, and substitutes for all other symbols aside from the scatter symbol.

Scatter Symbol: The ‘Pink Panther’ logo symbol acts as the scatter symbol and can win you a cash payout if it appears anywhere on the reels in groups of three (wins 5x your bet-per-line), four (w5x) or five (125x).

Pink Pow!: This feature is triggered randomly during the game. Your pink pal will explode between two and six symbols, turning them into wild symbols which then substitute for all other symbols aside from the scatter.

Crack the Pink Code Bonus: In this bonus game you have to select from ten safes to take a pink peek inside. They may contain free games, multipliers, expanding wilds or dynamite! You keep picking until you uncover the dynamite, at which point the game ends with a bang!

The Color Pink Bonus: The Pink Panther and ‘The Little Man’ paint a wall of numbers in pink and blue. The more numbers that are painted pink, the better it is for you. You can play this game up to three times to see if you can gain a better prize each time.

Wheel of Pink Bonus: Mr Panther will spin two wheels. The external wheel contains cash prizes, while the internal wheel features ‘respin’ or ‘collect’. You keep re-spinning until you land on ‘collect’ at which point you collect the prizes you have won so far.

Pink Trail Bonus: You can help the hopeless Inspector Clouseau to follow a trail of pink footsteps, winning prizes as you go along. If you happen upon a trap, the round is ended. Finish by finding a diamond and your entire prize is doubled.

Pink Panther is a a seriously groovy slot from Playtech, and has enough bonus games to keep anyone happy, even the perpetually grumpy ‘Little Man’ from the cartoon series!

It’s as plain as your nose – it’s one truly original panrther-pink (panther) slot!