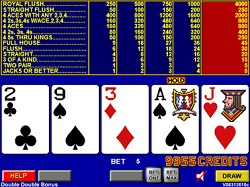 Video poker is not one of the most popular types of casino gaming for casual gamblers. On the other hand, though, casino veterans swear by the game, and know that it’s one of the best bets for the player. Many video poker machines offer only the slightest of edges for casinos, and in some cases, the player can even hold a small advantage over the house — something you’ll rarely find in any casino.

With odds like that, why isn’t video poker the most popular game in every live and online casino in the world? The biggest reason is that video poker takes strategic knowledge to play well, and these strategies can sometimes be complex. Playing badly means that the odds on these machines can be much worse, and many players do not want to take the time to memorize these strategies.

However, that’s not to say that they’re impossible to learn. There are plenty of ways to learn the best strategies for various video poker machines, and if you don’t want to take the time to learn how to play a game perfectly, there are numerous ways to approximate the optimal strategy and still get some of the best odds in the casino.

Where to Play Video Poker Online

When it comes to most online casino games, it doesn’t matter much which casino you play at — at least in terms of the odds you receive. However, that is not the case in video poker. Given the dozens of different video poker machines you can find around the internet, you’ll want to make sure the online casino you choose offers the exact games you wish to play.

But even more importantly, you’ll want to take a look at the different paytables that are offered by various casino sites. Even among copies of the same video poker machine, the odds can vary tremendously depending on exactly what payouts are offered on various winning combinations. For instance, on the popular Jacks or Better machine, the difference between a “full pay” machine and a poor paytable can be the difference between having a return of 99.5% or 95% — an enormous difference when it comes to your chances of coming out as a winner after playing. We’ll talk more about analyzing pay tables in the strategy section below.

How to Play Video Poker Online

While video poker is a complex game in strategic terms, it’s actually a very simple game to play. Most video poker machines have many features in common; while some machines offer different dynamics or special added options, the following information should be enough to get you started on the vast majority of video poker machines.

A typical online video poker machine will give you the opportunity to play at several different denominations. On some machines, you may also be given the chance to play for various numbers of hands simultaneously. We’ll talk more about how this works in a moment, but for now, it’s important to note that you’ll have to pay for each hand you play. In other words, if you play 50 hands for $1 each, you’ll be paying $50 each time you start a hand.

Once a hand begins, the player will be dealt five cards out of a standard deck of 52 cards (some games also include one or more jokers in the deck). Players will see their cards on the screen, and will have the choice to hold or discard each card individually. The object of the game is to make a winning poker hand, meaning that players should choose cards they believe will help them make a winning hand.

After players have chosen which cards to hold, the other cards can then be discarded. These cards will be replaced by other cards dealt from the deck. Once these new cards have been dealt, the player will be paid according to the pay table for that game.

If the player chose to play multiple hands simultaneously, the game still plays the same way — with one exception. After the player discards their cards, new cards will be given to their hand as normal. However, this process will be repeated multiple times, once for each hand the player has chosen to play. Each of these draws is made independently, meaning that the cards drawn for one hand do not have an impact on what cards are picked for the next hand, and the same cards can be drawn multiple times.

On many video poker machines, players will also have the chance to play a gambling game after they are paid their winnings. Usually, this is a simple game that essentially offers the player the chance to go double or nothing if they can predict something about a card drawn randomly from the deck — say, if the card will be high or low, or if the card will be red or black. This game is entirely optional, and can be ignored entirely or played multiple times at the player’s discretion.

Video poker strategy comes down to two critical components. First, players must carefully seek out machines that offer the best payouts in order to maximize the returns they can expect to receive from the machine.

Depending on the particular machine you choose to play, the pay tables offered will be drastically different. For an example, let’s take a look at the “full pay” version of Jacks or Better Video Poker. That machine has a pay table that offers the following payouts:

This pay table is known as the 9/6 pay table, owing its name to the payouts for a full house and a flush respectively. While this pay table has a return of 99.54%, even a fairly similar one — say, a nearly identical table with a payout of just five credits for a flush — will see that return fall to only 98.45%.

The other important component to online video poker strategy is knowing the optimal way to choose which cards to hold and which to discard. Strategy cards and charts are available in many books and on several websites, with strategies ranging from simplified approximations to detailed strategies that cover every possible hand you might receive.

The following is one example of a simplified strategy for Jacks or Better video poker. This strategy is easy to follow, but also powerful; it shaves less than 0.1% off of the returns you’ll receive from a machine when compared to perfectly optimal play. This strategy is based on one posted by The Wizard of Odds.

To use this strategy, simply look at the cards you are holding, then at the list below. Keep the combination of cards that you hold that’s nearest to the top of the list (for instance, you would keep three cards to a royal flush instead of a lower pair, since the three cards to a royal flush comes higher on the list). If you do not hold any of the cards listed here, you should instead discard all five of your cards.

The order of hands to hold is as follows: