Play Jack and the Beanstalk

Jack and the Beanstalk Game Information

Many of the newest Net Entertainment slot machines feature advanced graphics and animations, similar to those found in the Betsoft 3D slots range of games. Jack and the Beanstalk is the latest of these machines, featuring a colorful world based on the classic fairy tale of the same name. But Jack and the Beanstalk is more than just a pretty face. With numerous special features and some big prizes hidden in the reels, this is a slot machine that’s been designed to appeal to serious slots fans. 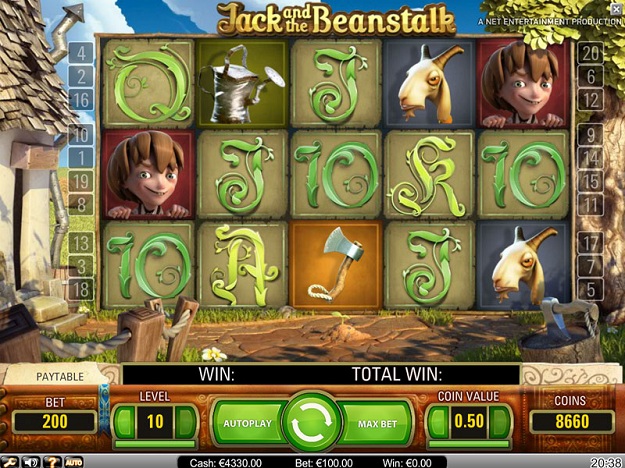 Visit www.Guts.com to play Jack and the Beanstalk!

Jack and the Beanstalk Slot Gameplay

Jack and the Beanstalk is a five-reel, 20-line slot machine which is available at most NetEnt casinos. Players have the option of wagering anywhere between one and ten coins per line, allowing for a maximum bet of 200 coins on any given spin.

The basics of this machine are fairly standard as slots games go. The object is to match identical symbols from left to right across your active paylines; matching three or more of the same symbol consecutively will win you a prize. Along with the classic card rankings (tens through aces), you’ll also match important aspects of the Jack and the Beanstalk story: the hand axe, a goat from Jack’s farm, the evil two-headed giant he encounters in the clouds, and Jack himself.

In addition, there are three special symbols that do not immediately rewards prizes, but have other effects on gameplay. First, there’s a special wild symbol (the Jack and the Beanstalk logo) that can substitute for any other symbol in order to make winning combinations. In addition, all winning combinations that include a wild symbol are tripled.

The two other symbols to watch out for are the treasure chest and the key. Both of these symbols are related to bonus games that can earn you additional rewards.

Jack and the Beanstalk Special Features

The simpler of the two bonus features in Jack and the Beanstalk is the Free Spins Bonus Round. This game is triggered if you find three or more treasure chests anywhere on the reels. This is a fairly straightforward free spins round, with no additional bonuses added to the reels; however, you can earn additional free spins if you find three or more of the treasure chest symbols on the reels during any of your bonus spins.

More interesting is the Treasure Collection mini-game that takes place throughout your time playing Jack and the Beanstalk. During gameplay, you’ll occasionally receive a key symbol on the fifth and final reel. The game will keep track of how many keys you have collected during your time playing, and will reward you with some very cool changes to the Walking Wilds feature.

For instance, if you can collect three keys during play, you’ll see each of your wilds become two stacked “money bags” symbols. Get your way to six keys, and you’ll have found the golden goose: your wild symbols will now become triple stacked golden hen wilds instead. Finally, nine keys will grant you access to the Expanding Golden Harp wild symbol, which will cover an entire reel each time you hit it. Coins are collected for as long as you play, resetting only when you trigger the free spins bonus.

Theme and Presentation in Jack and the Beanstalk

Of all of the NetEnt slots we’ve reviewed, Jack and the Beanstalk may very well be the most attractive. The game begins with a long animated sequence in which Jack attempts to escape from the castle in the clouds, being chased by the giant that lives there. Once you’re actually in the game itself, you’ll see that there are cartoonish, “fairy tale” graphics that use the kinds of bright, cheerful colors you’d find in a Disney movie. These 3D graphics are reminiscent of the features we’ve seen in Betsoft games like The Slotfather.

While there’s no real music in the game (other than an upbeat tune when you hit a walking wild), the soft, natural sounds of birds chirping in the background are enough to lend a relaxed feel to the machine.

Top Payouts on Jack and the Beanstalk

If you want to win big on this machine, you’ll want to find as many Jack symbols as possible during your spins. Hitting five Jack symbols on a single payline will earn you 1,000 coins. Of course, since all wild wins are tripled, it’s possible to win 3,000 coins on a single line if a wild symbol is included in that combination. Even larger wins are possible if you’re able to land several wild symbols and keep the Walking Wild respins triggering over and over again.

Visit www.Guts.com to play Jack and the Beanstalk!