If we’ve learned anything from television and the movies, it’s that you don’t want to mess with the Mafia. From The Sopranos to the Godfather, mafia stories gave become a huge part of popular culture, which makes them a great target for the slot machine industry, too.

The Slotfather takes advantage of this tradition by satirizing the mafia movie genre. While the title would suggest it’s a direct parody of The Godfather movie series, it’s more of a take on the entire genre, with very few references that could be directly attributed to the famous films. Well, there is one big one: when you first load the game, the Slotfather himself (surrounded by his cronies) makes it clear how he gets customers to keep coming back to play his games – in his words, he offers them a jackpot they can’t refuse. 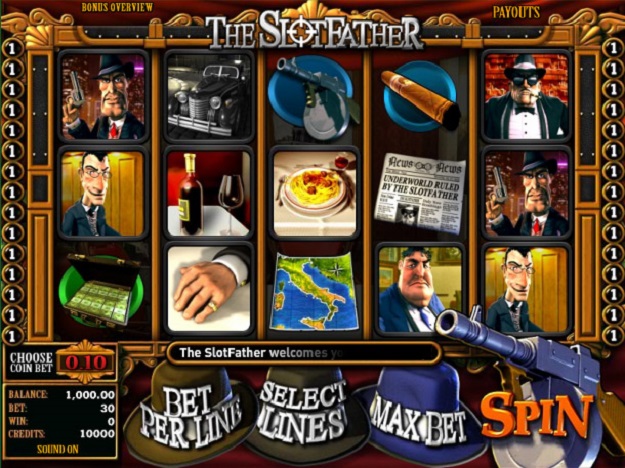 Basics of The Slotfather

The Slotfather is a five-reel slot with three rows of symbols on the screen at any given time. You can play up to 30 different paylines, and each line can be played for up to five coins at a time. Coin denominations can be set for between $0.02 and $1, meaning that the maximum total bet for the machine is $150 per spin.

The object of the game, of course, is to match symbols from left to right on a single payline. For most symbols, you’ll have to match three or more symbols at once in order to win. Lower value symbols are various items that fit into the whole mafia theme, like cigars, maps of Italy, guns and bottles of wine. The more of each symbol you hit, the more you win. For instance, the lowest value prize is a newspaper, which offers the following prizes:

Higher value symbols can trigger wins even if you hit only two; these include getaway cars, briefcases full of money, and the Slotfather’s henchmen. The highest standard win comes from hitting five of “Frankie da Fixer” – that’ll earn you a total of 200 coins on that payline for each coin you bet!

The game definitely plays up the mafia theme, with music and sound effects that fit right into the mythos of an underworld Italian gang. Visually, The Slotfather is gorgeous to look at, with crisp graphics and nice effects from the moment you start playing.

Special Features on The Slotfather

The Slotfather uses some interesting and unique bonus features, rather than relying on the standard “scatter and wild” system seen in most slot machines. The “underboss” symbol (also known as Fat Tony) is labeled as a scatter, but it only pays if you should hit three or more on an active payline. It also combines with other high value symbols to earn a handful of bonus credits for you. It is worth noting that five of these underboss symbols earns one of the biggest possible prizes on the reels: 300 credits per coin wagered.

Where this machine really stands out is in the number of bonus ways to win that can be triggered at any time. A couple of these occur when you make interesting combinations of symbols right next to each other.

For instance, if the “Sammy Quickfingers” symbol should appear directly to the left or the right of a briefcase symbol, it activates the Sneaky Instant Win game. Sammy will reach into the suitcase and grab some cash, at which point the game will award you a number of instant bonus credits in addition to any other prizes you may have won on that spin.

Another fun feature is the Multiplier Mob Free Spins feature, which can earn you some very lucrative bonus games. This game is triggered should Frankie da Fixer should appear directly next to a Tommy Gun symbol. Frankie will grab the gun and shoot bullet holes on the game screen. You then will have the opportunity to choose one of the bullet holes. Depending on which hole you pick, you could win anywhere between 3 and 10 free spins. In addition, these free spins will come with a multiplier between 1x and 3x, which has the potential to make your winnings even bigger on these spins.

But the most interactive and fun bonus of all comes when you hit at least three Slotfather symbols on the same active payline. This immediately triggers a bonus game on another screen, in which you’ll be presented with a number of different businesses in the city. You’ll have the opportunity to place the Slotfather’s own slot machines in three different businesses. The slots will earn money for you in each location, with the three amounts adding up to total your bonus. This game also adds to the immersion factor, as after you’re done, you’ll get to watch an animated sequence where you’ll be sitting down with the Slotfather and his underlings at their favorite Italian restaurant. You’ll get to sit in on their conversation as they discuss the work you’ve done, and finally award you your bonus winnings.

Final Thoughts About The Slotfather

The Slotfather has the same impressive graphics, sound, and interactive features we’ve come to expect from most of the BetSoft 3D slots. However, it combines this with a very rich and entertaining theme to truly make an excellent slot machine. We really enjoyed playing for long enough to see all of the bonus features contained within the game; each is unique enough to keep the game exciting and fresh. One thing that we should point out is that there are no really “small” payouts; since the minimum prize is 20 credits, almost every time you win the payout will be significant, though that also means you’ll win less often than on some machines. If you prefer frequent (but smaller) wins, that might come as a disappointment to you.

For the most part, though, there’s little to complain about in this game. If you’re a big fan of gangster movies, you will absolutely love playing The Slotfather, and will probably get into all the cheesy dialogue and action on each spin. But even if this isn’t exactly what you’re looking for, you’ll probably have a good time thanks to the fun gameplay and excellent atmosphere the game creates.