Steam Tower is a steampunk themed video slot machine which has been developed by Net Entertainment. It sees the 19th-Century Victorian age meet Sci-Fi with an industrial/fantasy style. The plot behind the Steam Tower slot machine is that players are on a mission to save a beautiful princess from an evil dragon, with a fully animated 3D character (the hero) situated on the right of the reels throughout gameplay clutching his grapple gun. Steam Tower boasts impressive graphics, which really enhance the theme of the slot, along with an exciting free spins feature which sees players progress through the different floors of the tower attempting to reach the top and rescue the princess from the dragon for a huge win! 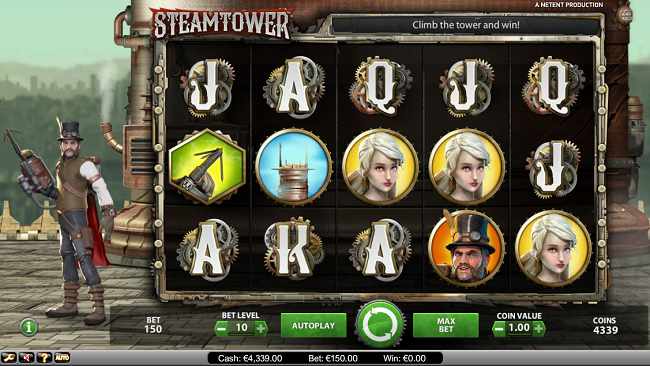 The Steam Tower slot machine is available at all online casinos offering Net Entertainment games. It contains a structure of 5 reels and 15 paylines, which are fixed and cannot be adjusted. The coin values available to select from are €0.01, €0.02, €0.05, €0.10, €0.20, €0.50, and €1, with players able to choose the amount of coins bet per payline – from one to ten. This means Steam Tower can be played for a minimum of €0.15 up to a maximum of €150 each and every spin, which should satisfy players of all bankroll levels.

Something which really surprised us about Steam Tower is the minimal amount of symbols which are used in the slot. There are four high paying symbols and four low paying symbols, whereas most online slot machines contain at least ten in total. The vicious Dragon’s Eye is the games highest valued symbol with five on a payline paying 2000 coins, and it is joined by the games main character – a moustached Victorian man, a Princess, the Steam Tower itself, and the lowest valued symbols which are the Ace to Jack playing cards – with five Jacks on a payline worth a mere 75 coins. Aside from these basic symbols there is a Wild and Stacked Wild, which you will learn more about below.

Wild Symbol: The Wild symbol in Steam Tower is the grappling gun. It substitutes for all of the other symbols, and it plays a praticularly important role in the free spins bonus feature (more on that below).

Stacked Wilds: The Stacked Wild in Steam Tower is the hero of the game – the moustached male who is attired in Victorian clothing and is holding on to his grappling gun. Not only does this present players with big wins, it activates the free spins feature too.

Free Spins: As mentioned above, the free spins feature is only triggered when players land one or more Stacked Wild symbols – though it is important to note they do not show up during the feature, therefore it cannot be retriggered. This sees players rewarded with an initial 10 free spins and players are taken to the first of sixteen floors in the tower. In order to progress up the many floors players simply need Wild symbols to land – which see them advance by one floor and gain an additional two free spins. There are also multiplier bonuses depending on the floor, which are as follows:

Should anyone be lucky enough to reach Floor 16 not only will they recieve a multiplier of 7x, they will also be credited with 1,000 coins multiplied by their initial line bet. The feature only ends once players run out of free spins or reach the final floor, with the furthest we managed being Floor 11 which still produced a hefty win!