Robin Hood: Shifting Riches is one of the most entertaining slots we’ve played at Net Entertainment casinos. This game has a fun theme that includes many of the characters made famous in the Robin Hood legends, along with a great graphical approach that really brings out the Robin Hood motif. But what will really get you excited about this game is the “shifting reels” feature, which is an innovative way to make gameplay a lot more fun, and which turns every spin into a potentially huge jackpot. 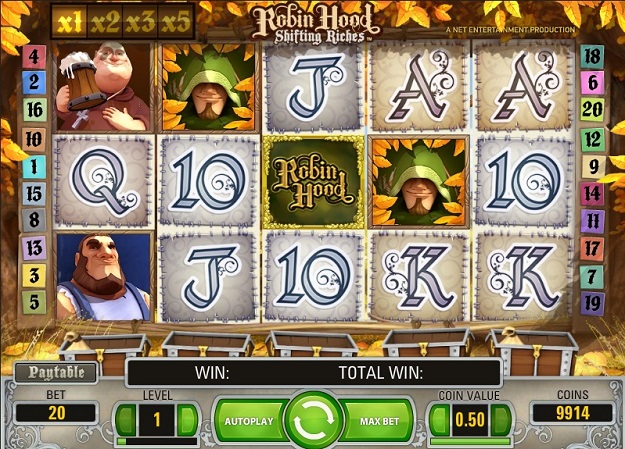 Robin Hood: Shifting Riches is a five-reel, 20-line slot machine that can be played at any casino featuring NetEnt slot machines. The object of the game is to match identical symbols from left to right across the reels consecutively.

There are ten different symbols that can be matched in order to win prizes. The five least valuable symbols are represented by the classic card rankings, ranging from tens up through aces. The game’s characters are worth bigger rewards, starting with the king’s soldiers and including many of Robin Hood’s “merry men,” including Little John and Friar Turk. Of course, the biggest prizes are reserved for Robin Hood himself. In fact, while most symbols require you to match three in a row to win, Robin Hood will trigger a win with just two symbols in a row.

Beyond the basic symbols, there are also three additional icons that can affect gameplay. Two of these symbols – the Free Spins symbol and the Money Bags – will be talked about more below in the Special Features section. However, there is also a wild symbol that can substitute for any of the regular winning symbols. In this case, that role is taken by the Robin Hood logo, which only acts as a substitute – it cannot win prizes on its own.

Robin Hood: Shifting Riches absolutely shines when it comes to its special features. First, it’s impossible to go any longer without talking about the Shifting Reels feature, which is at the heart of the Robin Hood slot machine experience.

Each time you win a prize, the Shifting Reels feature will be activated. After all prizes and special rewards have been recorded, the final reel will move off of the screen, and all other reels will shift to the right. There will now be a new first reel which will spin until it locks into position. If the new reel positions result in another winning combination, the process will repeat itself! You’ll continue to earn new Shifting Reels until you have a spin with no winning combinations.

There’s an additional bonus that gets bigger the longer you can keep the Shifting Reels feature going. The first time the reels shift after you win, a 2x multiplier will be applied to all of your winnings. If the reels shift a second time, you’ll now have a 3x multiplier. And if you can trigger three or more reel shifts, you’ll receive a 5x multiplier on all of your further wins! This feature can lead to amazing winnings, especially if you have a couple wild symbols that keep the reels shifting for a while, and you hit a big prize with a large multiplier attached.

The other special feature on this machine is all about Robin Hood’s reputation for robbing from the rich and giving to the poor. During play, you’ll occasionally see a Money Bag symbols show up on the reels. Robin Hood will collect this for you, throwing it into a treasure chest below that reel. Once you’ve collected four bags in any one chest, you’ll start a free spins game that will award you 10 free spins for each treasure chest that’s completely full.

During these free spins, one of the game’s characters will also turn into an extra wild symbol. In addition, the Money Bag symbols will not appear during this part of the game, and will instead be replaced by yet more wilds. You’ll also have a chance to keep the free spins coming, as hitting two or more Free Spin symbols will add five or ten additional free spins to your total.

The biggest prize in Robin Hood comes, of course, when you hit five of Robin Hood on a single payline! This will pay out 1,000 coins for each coin you bet on that line. With the potential to be up to ten coins per line, you can win as much as 10,000 times your coin value by hitting this combination.

Robin Hood: Shifting Riches really goes the extra mile with its presentation and is one of the only 3D video slots from NetEnt. The game begins with an animated sequence in which you’ll see Robin Hood and his Merry Men fighting guards and stealing gold, which he then distributes to the poor. During gameplay, you’ll see small animations when you score a win with one of the game’s cast of heroes (or villains), adding a lively feel to gameplay. The game takes place in an autumn forest background, and has music that would fit into the score of a dramatic action film.