Imagine exploring an ancient temple in search of a legendary treasure. On your way, you’ve avoided traps, followed clues and probed the temple’s secrets. Now, you’ve finally reached exactly what you’ve been looking for: the treasure room, filled from top to bottom with gold, jewels and priceless artifacts.

The Treasure Room slot machine gives you the chance to gain all the wealth without having to leave your couch! There’s no limit to the wealth you can take home from this slot machine, especially if you fully explore all of its secrets and unlock each of the game’s hidden features. 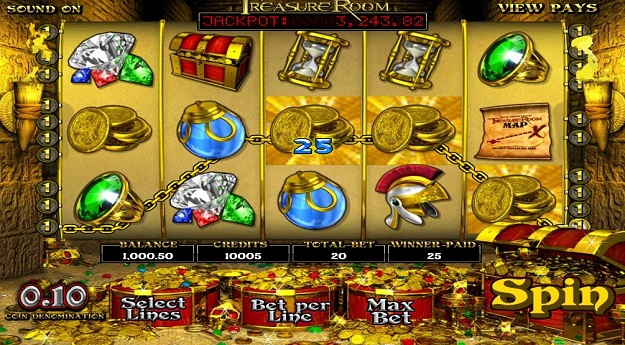 Treasure Room is a 3D slot machine from Betsoft Gaming, though it doesn’t feature as much of the advanced animations and sound effects that are included in the newer 3D slots such as the Mamma Mia slot machine. Instead, the game plays a lot more like a basic video slot, with just some small added animations and a few bonus games distinguishing itself as a 3D Slots game.

Treasure Room does have a few features that aren’t commonly found in Betsoft games. While it is a five-reel game, if features only 20 paylines, in contrast to the 30 lines offered in most other 3D slot games. The object of the game is to match at least three identical symbols consecutively across one of your active paylines. However, unlike in most games, you can make your matches starting from either the left or the right side of the reels, giving you twice as many chances to win. Players can bet up to five coins per line, with coin denominations ranging from $0.02 to $1.

There are eight different standard symbols you can attempt to match in order to win prizes. These range from lower value symbols like an hourglass and a map, to the ultimate prize, the treasure chest. Matching five chests will earn you 1,000 credits per coin wagered. With a maximum bet, that’s a prize of up to $5,000!

While the graphics, animations and gameplay in Treasure Room might all sound a little too simple for a Betsoft 3D game, it does feature a number of different bonus round games and special features that really liven up the slot machine.

First, hitting three calendar icons anywhere on the reels will start the Treasure Room Second Screen bonus feature. In this game, you’ll see three doors, each of which has a gem or other treasure hidden behind it. You’ll get a chance to open all three doors, each of which will reward you with bonus credits. Prizes scale based on the number of calendar symbols you hit on the reels; for instance, hitting four calendars will generally reward bigger prizes than just three.

Next up is the Sword and Shield Instant Bonus game. If you hit three or more Sword and Shield icons on an active payline, you’ll trigger a “click me” game. You’ll be given the opportunity to pick and of the icons on the screen, each of which holds a secret instant prize. Depending on the number of lines you’ve played (and the number of lines that have the winning icons in them), this bonus can range anywhere from 125 to 5,000 credits.

Finally, Treasure Room also has one of the classic slot machine prizes, and one we haven’t seen on too many of the Betsoft 3D Slots we’ve reviewed: a progressive jackpot! If you make a maximum bet and hit five treasure chests during play, you’ll win the progressive jackpot in addition to any other prizes you’ve already won. At the time of this writing, the jackpot stood at a little over 3,000 credits – definitely a worthy reward for any player.

Treasure Room is one of the older 3D online slot machines from Betsoft, and it definitely shows. While other 3D games feature animated sequences, voiceover work and graphical flourishes each time you win a prize, Treasure Room offers none of these extras.

Instead, if you’ll enjoy Treasure Room, it will be based on the gameplay and special features. For the most part, the game is solid in these respects, if not outstanding in any one area. It is also a progressive slot, which is rare at Betsoft casinos; and while it’s not a huge prize, it’s a nice extra that always give players something to shoot for during play.

Overall, Treasure Room is not one of the most advanced or interesting real money slots we’ve ever seen, but it’s a pretty fun game nonetheless. It may not have any frills, but if you’re simply looking for a straightforward slots experience, Treasure Room is a fine game.