There’s nothing like some authentic Italian cooking to brighten up even the dreariest day. In Mamma Mia, you’ll get to hang out behind the scenes at a swanky Italian bistro, complete with the freshest ingredients and most flavorful wines in town. Make the best food possible, and you might even impress the local food critic enough to get a positive review in tomorrow’s paper – not to mention win some huge prizes along the way. 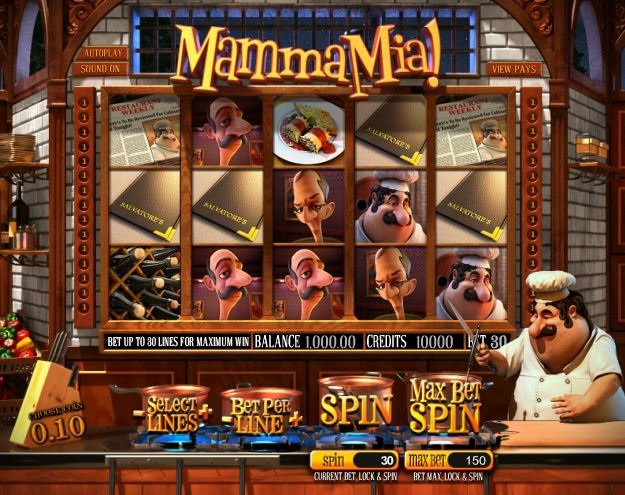 At first glance, Mamma Mia appears to be similar to most of the new 3D slot machines from Betsoft Gaming. It features plenty of slick animations, 3D graphics and interactive bonus rounds. It also offers what might be called the standard betting options for Betsoft slots: there are five reels and 30 paylines, and players may choose to wager between one and five coins per line. Coin denominations range from $0.02 to $0.50.

The standard gameplay in Mamma Mia is what you’d expect: the object is to match identical symbols across the reels from left to right on your active paylines. There are nine standard symbols in total, ranging from ingredients and boiling water to the restaurant critic and the head chef. If you want to win the largest prizes possible, your goal should be to aim for the chef; if you manage to match five across a payline, you’ll earn 500 credits for each coin you wagered.

But Mamma Mia is so much more than the basics. In fact, this game may feature more innovative and unique features than any slot machine on the market today.

First up is a unique take on the classic free spins game. When you match three or more pizza icons anywhere on the reels, you’ll trigger a free spins feature that takes place on an entirely different set of reels. Instead of the standard symbols, the reels will feature seven different popular pizza ingredients, like tomatoes, onions, olives and pepperoni. Each time you hit a new winning combination, you’ll watch the chef add a new ingredient to the pizza. Once the free spins are over, the chef will bake his pizza, and you’ll be given your total reward for the game. This bonus round actually has some even larger prizes than the standard reels; hitting five pepperoni symbols on a single payline can earn you 1,000 credits per coin wagered!

Next up is the always-popular click me game. If you hit three or more food cover symbols anywhere on the reels, you’ll be prompted to choose one of the covers. Selecting one will reveal not only the food that sits underneath it, but also an instant credit prize.

As we’ve come to expect from Betsoft’s games, there’s also a ‘second-screen’ slots bonus round available. In this case, the game is triggered by hitting three or more menu symbols anywhere on the reels during a spin. You’ll be transported into the kitchen, where the chef is attempting to cook the perfect meal for the food critic. You’ll help the chef decide what to send out, after which you’ll watch the critic give your meal a try. The critic will then judge your dish on four different criteria. The higher the scores you get, the bigger your instant credit bonus!

There’s one last feature in Mamma Mia that we weren’t sure exactly how to classify during this review; it certainly qualifies as something special, so we’ve decided to put it here. During the game, you’ll occasionally hit some wild painting symbols, which substitute for any standard symbol and can help make winning combinations.

However, Mamma Mia also features a special option that allows you to create locked bonus symbols anywhere you wish on the reels. Before you spin, just click on any position on the reels to turn that symbol into a locked wild; that spot on the reels is then guaranteed to be a wild symbol for the next spin. Obviously, this comes with a cost; each time you add a wild symbol to the reels, the cost for the spin will go up. For instance, adding two wilds on the center position of the second and fourth reels will greatly increase your chances of winning, but will also cost you nearly 4x as much as a regular spin. If the cost of a spin is more than 5x the normal price, you’ll be warned before you confirm that you actually want to wager that much on the spin.

Mamma Mia is definitely unlike any other slot machine we’ve ever played. The colorful graphics, sounds and animated special features make the game a lot of fun to play, but that’s true of any of the newer Betsoft slot games. Where Mamma Mia really stands out is in the special features, like the truly unique locked wilds option, and the creative free spins pizza-making game. If you’ve been looking for something different – or just feel like having a nice Italian meal as part of your slots experience – Mamma Mia is absolutely worth playing.