Everyone knows that when you find a mysterious bottle, the first thing you should do is rub it. How else are you supposed to find out if there’s a genie inside? If you do happen to find a genie, every story in the book tells us that he’ll grant you three wishes that you can use to get anything your heart desires.

The Three Wishes slot machine doesn’t actually contain any genies, but if you’re hoping to win a fortune, it may be able to grant you at least one of your wishes. 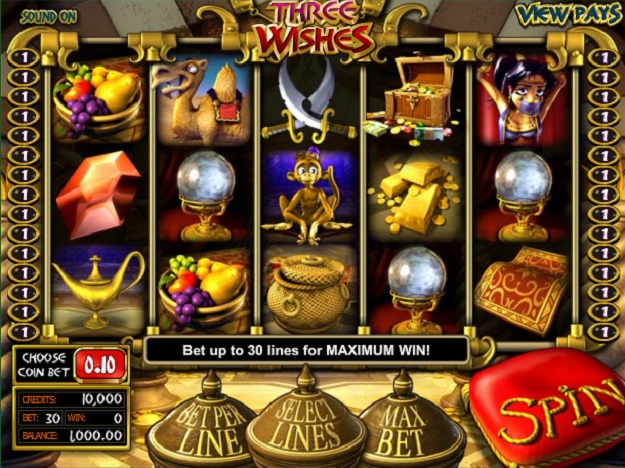 Three Wishes is one of the most popular 3D slot games in the Betsoft Gaming series, and features the stunning graphics and cute animations that Betsoft is famous for. This game breaks from a few of the Betsoft standards of gameplay; while it still features five reels and thirty paylines, Three Wishes allows you to play up to 10 coins on each line. With coin denominations as high as $1, that means you can bet up to $300 per spin if you so desire – one of the many reasons Three Wishes has become one of the most popular real money online slots available.

The object of Three Wishes is to match three or more of the same symbol consecutively on any active payline. In this game, you can win by matching symbols beginning on the left or right side of the paylines, giving you twice as many chances to win.

There are eight different standard symbols you can attempt to match on the reels, from the lowly snake charmer’s pot to a captured Arabian princess. The princess is the highest value symbol, and can earn you up to 200 credits per coin wagered – a prize of up to $2,000 if you’re playing for the maximum possible bet.

Three Wishes is loaded with special features and little bonuses that help keep the gameplay fun and varied. First, the game features a wild symbol – a magic carpet – that can substitute for any of the normal prize symbols. In addition, matching multiple carpets can also win you some money; in fact, the largest standard prize on the reels comes when you match five carpets on a payline, earning you 250 credits per coin wagered.

But there’s even more fun to be had with the carpet icon! If you land one of the carpets on the first reel, you’ll trigger an animation in which the carpet flies to its right across the entire screen. The symbols in its way will be squashed, leaving behind instant bonus credits for you.

The next special symbol to watch out for is the monkey. Everyone’s favorite playful primate is especially fun to land on the middle position of the center reel. When this happens, the four adjacent symbols (those to either side of the money, as well as the ones above and below it) will be available for you to choose from. You can choose which of these “click me” icons to select; once you’ve made your choice, you’ll be presented with an instant reward. You’ll even get to continue choosing additional symbols until you hit one that has the word “Collect” hidden behind it.

Finally, the biggest game of them all is the Second Screen Genie Bonus Round. If you manage to find three or more lamps on any active payline, you’ll move the game to a different screen. Click on the lamp to release the genie, and he’ll ask you to choose from six different possible wishes, each of which hides a different cash reward for you to enjoy.

It’s easy to see why Three Wishes has become one of the most successful of the Betsoft slots. Not only are the sounds, graphics and animations top notch, but the gameplay holds up well too. The game is flavorful and fun, faithfully exploring the themes of genies and wishes without taking away from classic slots gameplay, and the online slot bonus rounds all fit seamlessly into the action without being overly complex or intrusive. Three Wishes is also a little more flexible in its gameplay options than most other Betsoft games, since you can bet up to ten coins per line, in contrast to the five coins per line in most of their games.

If there’s one thing missing from Three Wishes, it’s a jackpot or especially large prize available from hitting the right combination of symbols – but that’s a minor flaw at most. As long as you’re just looking for classic slots action and don’t need a huge progressive jackpot to make you happy, Three Wishes should be able to make your wishes come true.