Everyone has a little mad scientist in them. Oh sure, maybe you’re not trying to take over the world or create a hideous monster, but that doesn’t mean you haven’t done any experiments in your day. Making your own changes to a recipe might not be quite as exciting as changing lead into gold, but it’s certainly in the same spirit.

In Mad Scientist, you’ll watch as a true lab rat runs a variety of crazy experiments in the search for riches. Follow along, and you just might find that the right combination of chemistry and ingenuity can earn you a whole lot of cash! 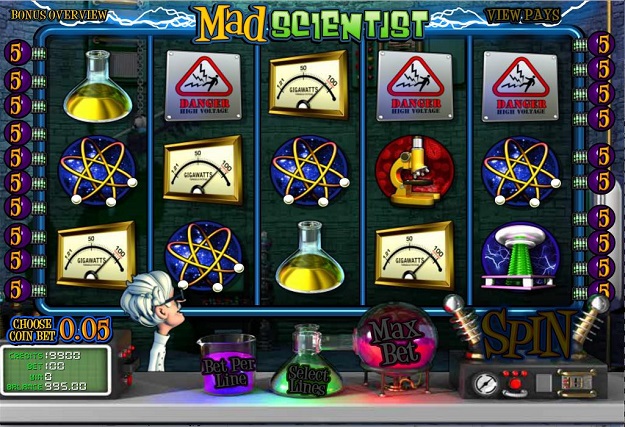 Mad Scientist was one of the first slots from Betsoft Gaming and is a classic example of their 3D slot machines. There aren’t as many special frills as some of the newer games; the animations are limited, the interface isn’t quite as interactive, and you won’t hear any voiceover work. However, the graphics are still sharp and colorful, and the game contains the same charm that’s still found to this day in the newest of Betsoft games.

Mad Scientist is a five-reel, 20-line slot machine that allows players to play between one and five coins per line. Coin denominations range from between $0.02 and $0.50, giving you a fair amount of control over how much the game costs to play.

The object of the game is to match symbols across the active paylines. In most cases, the symbols need to be matched from left to right consecutively, starting from the first reel. For instance, match three microscopes, and you’ll earn a prize of 50 credits for each coin you’ve played. Matching more of the same symbol leads to bigger wins; five microscopes is worth 200 credits. The highest value symbol is the electric ball, which can earn you as many as 1,000 credits per coin – meaning there’s a jackpot of up to $2,500 available if you play for the maximum bet.

Unlike most of the Betsoft 3D games, Mad Scientist features both a wild and a scatter symbol. The chalkboard is the wild symbol, and substitutes for any of the standard symbols. The lever is used as a scatter symbol; match three or more of these icons anywhere on the reels (regardless of how many paylines you’ve actually played for that spin), and you’ll win a prize of up to 250 credits.

There are three special features that offer players additional ways to win bonus credits while playing Mad Scientist. The first is the “Wild’o’Cution” game, which is triggered whenever the Tesla Coil symbols appear on both the first and last reels on the same line. The two coils will send a shock to each other, electrocuting the symbols in between. Those symbols will become wild, which often triggers some enormous wins on multiple paylines.

One of the popular slots bonus games Betsoft is known for is their “pick me” features. In Mad Scientist, you’ll be able to trigger one of these games by hitting three or more biohazard symbols consecutively on the same active payline. You’ll get the chance to choose one of the icons, which will reveal an instant bonus prize. The size of the prize can vary tremendously depending on the number of coins you’ve played for, as well as the number of paylines that the biohazard symbols appeared on.

The most lucrative bonus game is the Great Experiment Bonus Round. This second screen game occurs when you hit three or more beaker symbols anywhere on the same active payline (hitting more than three symbols will increase the winnings awarded in the bonus round). Once the game begins, you’ll see four objects that the mad scientist is ready to experiment on. Pick an item, and you’ll watch as he dips it into his new serum in an attempt to turn it into gold. Depending on the outcome, the object might turn into bronze, silver, or gold, each with a corresponding reward. You’ll get to pick three objects in total to dip into the serum; at the end of the game, you’ll be rewarded with the total number of credits from each object.

Of the older-style Betsoft 3D slot machines, Mad Scientist stands out as one of the best. While it doesn’t feature the extensive presentation features that are present in the newer games of this line, it still does a good job of evoking the theme of a crazy scientist performing wild experiments in his secret lab. The bonus rounds are a blast to play, as they mix big rewards with gameplay that’s just plain fun.

If you want a game that has the maximum number of frills and animations, you’ll want to look for one of the newer Betsoft 3D games like The Slotfather and Mamma Mia. However, if all you want from your game is fun play, solid prizes and a few extra bonus rounds that liven up the game, Mad Scientist might be just the creation you’re looking for.