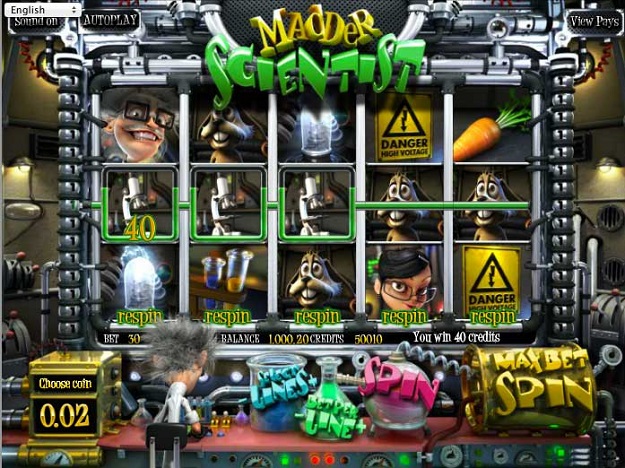 Madder Scientist is a five-reel, thirty line slot machine that is available through Betsoft casinos as part of their 3D Slots line of games. Players have the option of wagering between one and five coins per payline, with prizes being multiplied by the number of coins wagered on each line. Several different denominations are available in each currency the game is played in, giving players plenty of control over how much money they spend while playing.

The object of the game is typical for slot machines: match identical symbols from let to right across your active paylines in order to win prizes. There are eight different symbols that award prizes, usually requiring three or more in a row to score a win. Symbols such as danger signs, beakers and microscopes will grant you access to small prizes, while matching two or more of the rabbit, the mad scientist himself or his lab assistant will give you a chance at some of the larger prizes in the game.

The biggest prizes are attached to both the scientist and his assistant. Hitting five of either of these symbols on a single payline will award you with 500 credits for each coin you wagered — up to 2,500 credits if you bet the full five coins.

But where Madder Scientist really gets interesting is in the game’s many different special features, each of which adds an interesting twist to the game.

Let’s start with a couple of the more standard special features. If you manage to hit three green flask symbols — one each on reels one, three and five — you’ll trigger a click me game. The object here is to click flasks to reveal instant prizes. Each one will award you credits, and you’ll have the opportunity to continue selecting more prizes until you click a beaker with the word COLLECT hidden behind it.

Next up is the second screen bonus round. This game is activated by hitting three or more carrot symbols anywhere on the reels in any spin. When this occurs, you’ll be transported into the scientist’s lab, where you’ll help him design a new formula to test on a carrot to feed to his rabbit. You’ll get to see the experiment play out in front of you, after which you’ll be awarded with a large number of bonus credits.

One very fun and extremely lucrative bonus round is the Wild Switches game. If you see three switch symbols anywhere on the reels, one of your reels will instantly turn wild at random. You’ll now be given a number of spins with that reel remaining completely wild! This game will virtually always win you a few big prizes; if the wild reel is one of the first two or three reels, it can be especially valuable and score you numerous prizes during each spin.

Finally, there’s one very interesting special feature that is fairly unique to Madder Scientist. After every spin, players are given the option of respinning any one reel of your choice by clicking the respin button at the bottom of each reel. This will give you the chance to complete new winning combinations, especially if you came close to scoring a major reward.

However, these respins come at a price. Depending on the layout of the reels and which reel you want to respin, you’ll have to pay a varying fee to receive the respin. This can be as little as one credit (say, if you want to respin the fifth reel and there are no immediate prize possibilities) or as much as several hundred credits (if, for instance, you’re very close to scoring two large wins if a symbols falls in the right place). You can continue respinning any reels you wish until you trigger a bonus round, at which point you’ll need to start spinning again from scratch.

Madder Scientist does the two things that are most important for any slot machine: it gives you lots of different ways to win, and it manages to be a whole lot of fun to play. With the combination of a fun theme and engaging bonus games, along with the special respin feature, we found ourselves constantly coming back for more while reviewing this machine. If you like slots that offer plenty of replayability and gameplay variety, you should enjoy playing Madder Scientist.