Play Paco and the Popping Peppers

Paco and the Popping Peppers has a Mexican theme, but that doesn’t begin to really describe what’s going on in this rather interesting slot machine. From the opening animated video that tells us of a downtrodden town just south of the border, it’s clear that the creators of this slot machine were definitely having fun creating the world this slot exists within.

Sure, Paco and the Popping Peppers takes place in Mexico, but there’s a lot more going on here. Of course, there are the namesake peppers as well – not to mention a few other seasonings, like onions and tomatoes. The result is a flavorful slot that’s ridiculously fun to play, and among the most engaging games you’ll find anywhere in a casino. 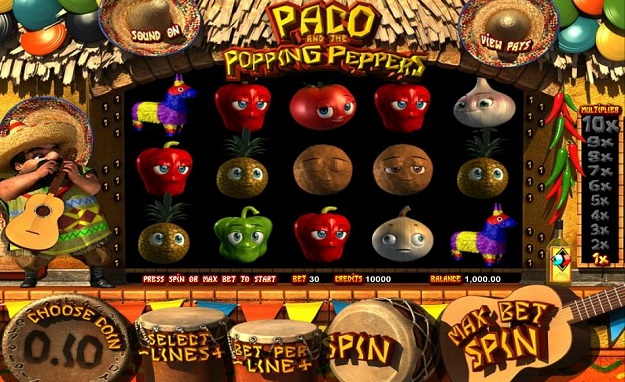 Visit www.DrakeCasino.eu to play Paco and the Popping Peppers!

Paco and the Popping Peppers Basics

Paco and the Popping Peppers is a 30-line, five reel slot machine from Betsoft. Players can choose to play for anywhere between $0.02 and $1 per coin, with a maximum of five coins allowed per line. As a part of the Betsoft 3D slots line, it features extensive graphics, animations, music and sound, all of which are used to expand upon the theme throughout the game.

The most basic aspects of gameplay will be familiar to any slots fan. There are several different symbols (mostly peppers and other things that Paco must be using to bring flavor to the depressed residents of the town he is revitalizing) that players can match. If you match three or more of any one symbol on an active payline, you’ll win a prize. Lower value symbols like the onion may only earn you two credits per coin if you match three of them; on the other hand, matching five pineapples will win a rather generous 200x your bet on that line.

Unlike many of the 3D Betsoft slots, Paco and the Popping Peppers includes a wild symbol: the piñata. The piñata can substitute for any standard symbol to complete a winning combination. Hit five piñatas on the same line, and you’ll earn 500 times your initial bet. If you bet the maximum amount per line, this means that you can win up to $2,500 on a single spin!

Special Features in Paco and the Popping Peppers

There are two important special features to talk about in Paco and the Popping Peppers.

The first is actually part of what gives this game its somewhat silly sounding name. Whenever you make a standard winning combination (including wins with wild piñatas), the winning symbols will “pop” – causing them to leave the reels and allowing new symbols to fall into place.

This sort of slot bonus game may be familiar to some players, as it has shown up in a number of different slot machine games over the years. However, Paco takes it to a new level. When your winning symbols pop, a multiplier bar moves up one level, and any wins earned after the reels have settled in with their new symbols are multiplied by the current level. If there are new wins, the process repeats itself: the winning symbols pop, the multiplier bar moves up a notch, and any wins created by new symbols falling into place are once again multiplied by the level you’re currently on.

This game can keep going for as long as you keep winning as new symbols appear on the wheel. While you’ll only very rarely win anything above the 2x or 3x level, it’s not impossible to go as high as 10x, creating some absolutely enormous wins in the process!

The other bonus game occurs if you hit three or more hut symbols anywhere on the reels. This triggers the fairly standard Higher or Lower bonus game. Paco will present you with a card from a standard deck of playing cards, and your job is to guess whether the next card will be of a higher or lower rank. Even if you get one wrong, it’s okay; you have three strikes before the game is over. Once you’ve actually hit your three strikes, or made it through a full ten rounds of play, you’ll be rewarded with some instant bonus credits. We found that this game was triggered fairly often, and making it all the way through the ten rounds of play sometimes earned 1,000 credits or more in bonus winnings.

Final Thoughts on Paco and the Popping Peppers

Overall, Paco and the Popping Peppers is an extremely fun slot machine to play. It’s a bit unorthodox; the theme is a pretty silly, and the bonus games aren’t exactly the standard fare seen in most slots (or even in other Betsoft 3D games). However, that just makes the game a refreshing change of pace from the sometimes monotonous nature of slot play. If you’re looking for a new flavor to spice up the slots experience, Paco and the Popping Peppers is definitely worth a look.

Visit www.DrakeCasino.eu to play Paco and the Popping Peppers!