There’s nothing like a taste of the high life. If you’ve ever seen the television show Lifestyles of the Rich and Famous (or for younger readers, even MTV’s celebrity house show Cribs), you’ll learn that…well, being rich and famous is pretty great. Designer cars, mansions, private jets…that’s the life, isn’t it?

In the Glam Life slot machine, you’ll get your shot at living out your dreams of fame and fortune. By connecting with all of the classic symbols of luxury, you can earn prizes, bonus games and even a progressive jackpot that might help pay for a mansion of your own. 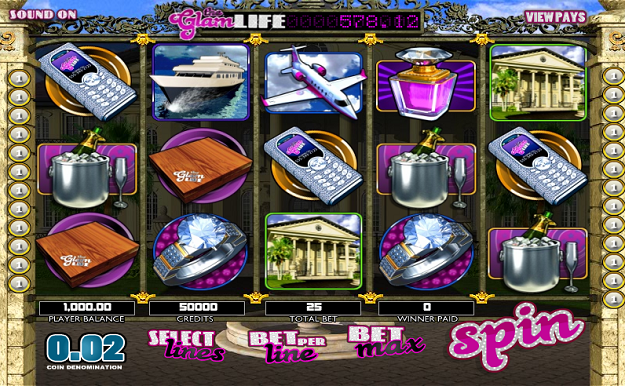 The Glam Life was one of the first real money 3D slots from Betsoft Gaming, but remains one of their most popular. It’s not as loaded with animated sequences and voice work as some of the newer games Betsoft has produced, but it does feature state-of-the-art graphics, excellent music, and those little added twinkles that really make the slot machine come to life.

The Glam Life features five reels and 25 paylines, each of which can be played for up to five coins. On this machine, coin denominations range from $0.02 to $0.50, which is a somewhat lower limit than the $1 coins available on most Betsoft Gaming slots. This makes the maximum possible bet on any one spin $62.50.

The object of the game is to match identical symbols across your active paylines, running from left to right. In general, you’ll need to match at least three of the same symbol in order to win a prize. Smaller value symbols include wine, credit cards and cell phones, while the true items of luxury represent your chances to win huge prizes. The biggest of all is the yacht, which can earn you up to 5,000 credits per coin wagered if you manage to hit five on a single payline. That means you can win up to $12,500 if you’re playing for maximum coins!

The Glam Life features a number of online slot bonus games and additional ways to win, each of which has a unique way of adding variety to the slot’s gameplay. Several of these games are classics that can be found in most Betsoft slot machines.

For instance, hitting three or more private jets on any active payline will trigger a free spins bonus round. The more jets you hit, the more free spins you’ll earn, up to a maximum of 25 free spins if you should hit five jets in a row. Similarly, three or more necklace cases on a payline activates a “pick me” bonus game in which you’ll choose between the activated symbols, each of which hides a prize of instant bonus credits.

Next up is the Match Bonus, which begins if you should hit three or more perfume bottles on a single payline. Once the game begins, you’ll see curtains drape over the game screen, and fifteen different ring boxes will appear on the screen. You’ll be given the opportunity to choose the box of your choice, which will reveal one of three different diamonds. You’ll keep picking boxes until you match three of the same stone, at which point you’ll be presented with a reward of up to 500 credits.

A “second screen” bonus game is also available should you hit three or more mansion symbols on the same payline. In this “Travel Around the World” game, you’ll be given the option to choose between a number of different fantastic destinations around the world: private parties, dinners at luxurious restaurants, movie premieres in Hollywood and more. You’ll get to choose any three of these options, after which you’ll be credited with additional bonus winnings.

Final Thoughts on the Glam Life

As we mentioned earlier, the Glam Life slot machine doesn’t feature as much glitz and glamour as you might expect if you’ve played some of the more recent Betsoft 3D slots games (such as the Mamma Mia slot or The Slotfather slot), especially given the game’s themes of luxury and excess. However, the feel of being outrageously wealthy is still captured fairly well here, especially in the bonus games, which do a great job of accentuating the theme. The progressive jackpot is also a nice fit here, even if it’s generally a pretty small prize.

The Glam Life is a fairly standard slot machine, but it’s still a fun way to get to experience the lifestyle of a millionaire. If you’re interested in slots that combine straightforward gameplay with plenty of chances to make it rich, Glam Life might be exactly what you’re looking for.