Fruit Zen is a fruit themed video slot, which allows players to win up to 200,000 coins. Designed and developed by BetSoft Gaming; Fruit Zen features wonderful looking fruity graphics, against a calm and tranquil 3D oceanic background. The video slot is small in stature, with just 10 paylines sitting on its 5 reels. There also aren’t really any special features in the game. 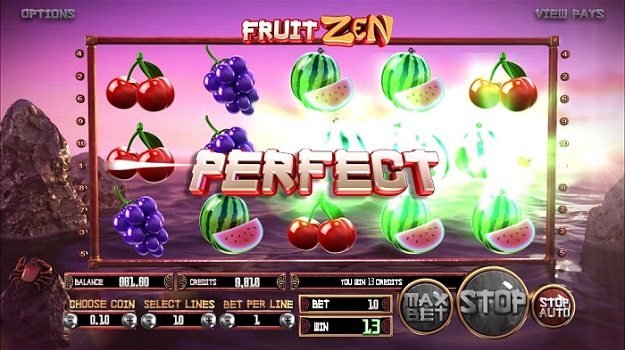 What you effectively have with the Fruit Zen slot, is a classic fruit machine, albeit reimagined as a modern video slot. Most of the symbols will be instantly recognisable to fruit machine lovers, such as lemons, watermelons, plums, grapes, oranges, and of course, the legendary cherries. One symbol you might not be expecting is the raspberry. As for its inclusion here; why not, right?

Fruit Zen has got an Asian-style gameplay menu, and its looks a bit crowded, if we’re being honest. Still, there’s plenty of control handed to the player over how theirs wagers are constructed, via this menu. Coin sizes can be adjusted from 0.02 up to 0.50, and players can feel free to adjust all 10 of Fruit Zen’s paylines. Players can also choose how many coins they wish to bet per line, with options ranging from 1 to 10 coins. Other buttons on the menu bar include a max bet button, an auto-play button and of course, the spin button. Fruit Zen is inexpensive to play. Minimum stakes cost only 0.02 per line per spin, whilst even a maximum bet won’t cost you any more than 50.00 a pop.

Like we’ve said; Fruit Zen isn’t jam-packed with special features. As a matter of fact, there is just one to mention. That special feature is a wild. All wilds need a symbol and the one used in Fruit Zen is the video slot’s logo.

The really good thing about this wild though, is that when it used to complete winning combinations, it expands to cover an entire reel. Wilds can only appear on the second, third and fourth reels. More good news is that if a player does land a wild icon when playing, they will then be given a free re-spin. As long as they keep bagging wilds, they’ll keep getting free re-spins. Whilst that is all fine and dandy, it is still the only special feature that Fruit Zen has to offer.

Given the lack of any bonus round or jackpot icons, you’re going to have to make the most out of your fruit. Five of a kind with these fruit symbols is the best way to win big money. Curiously enough, the cherries represent the smallest paying icons in Fruit Zen. Normally in fruit machine themed games, they are worth better pay-outs than the 30, 100 or 250 coins you can pocket for 3, 4 or 5 of them on a winning payline.

By contrast, the orange is actually the best paying symbol. Oranges can reward players with wins of 500, 2,000 or 2,500 coins, if 3, 4 or 5 appear on any active payline. Failing that, lemons are the next best bet with wins ranging from 250 up to 1,200; followed by grapes, watermelons, plums, and raspberries.