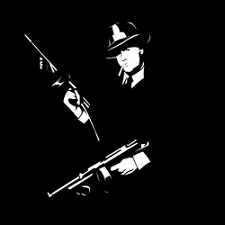 The Gangster genre is hugely popular worldwide with countless movies, television series, and video games all produced to cash in on peoples fascination with the murky dealings which occur in the Underworld. Therefore it should come as no surprise that there are several online slot machines which have a Gangster/Mafia theme with symbols such as guns, cigars, money, and blood all prevalant throughout the games.

The most interesting aspect of the Gangster slots available online is that several are ‘licensed’ games – meaning clips from their movie/TV show are featured throughout the game, such as Scarface and The Sopranos, which makes playing them even more enjoyable if you were already a fan.

The Slotfather was released by Betsoft Gaming in 2009 and is credited with propelling the company in popularity. It is a 3D slot machine, which was a welcome change for players from the standard basic slots they were used to, and is jam-packed with special features and animated video scenes where you will be introduced to The Slotfather himself. Like most Betsoft slots, it is a 5-reel, 30-payline game, and symbols used on the reels include The Slotfather and his criminal cronies, a Tommy gun, luxury Rolls Royce, a briefcase full of money, and other features from the criminal underworld. Bonus features included in The Slotfather are the Underboss scatter (win credits by landing 3+ scatter symbols on a line), Sneaky Instant Win (one of the Slotfather’s cronies reach into a briefcase, pulling out a bundle of cash, given to you in credits), Multiplier Mob Free Spins (win between 5 and 20 free spins with multliplied wins of between 1x and 20x), and the Slotfather second-screen bonus game (where you must choose three businesses to place a Slotfather slot machine, concluding with an animated video where the Slotfather congratulates you).

‘Say hello to my little friend’ is one of the most famous quotes in movie history, and Net Entertainment have done an incredible job producing the Scarface slot machine thanks to teaming up with Universal so that clips from the actual movie could be used in the slot. Scarface is one of the most popular movies of all time and was released in 1983 by Brian De Palma, starring Al Pacino, who played the role of Tony Montana – a Cuban who moves to Miami with nothing but aspirations of becoming a drug lord. The Scarface video slot features 5 reels and 20 paylines, with a maximum bet of €100 per spin, and several bonus features which can prove to be very lucrative indeed. The most interesting of these is the ‘Say hello to my little friend’ bonus feature which is particularly brutal just like in the movie. The scene of Tony on the balcony and the enemies approaching him on the stairs has been recreated, with you having to select which enemy to kill (which earns you points), until Tony’s luck finally runs out and the enemies catch up with him (which ends the bonus feature with the infamous scene of Tony falling into the pool shown, and your winnings awarded to you). Other parts of the movie are also incorporated into the slot, with the Babylon Night Club featuring in the free spins game (where you get 15 free spins, all of which have a 3x multiplier), and there are also three stacked wilds, along with a nudge wild feature, which are also very rewarding.

The Sopranos was one of the most popular TV series in recent times, airing in 1999 and running for 6 series for a total of 86 episodes until it’s finale in 2007. It was an American drama revolving around Italian-American mobster Tony Soprano (played by the late James Gandolfini) as he juggles family life and his crime business, and with many people considering it to be the greatest television series of all time, it’s no surprise software developer Playtech created the slot, adding to their range of licensed slot machines. The Sopranos is definately one of the most rewarding slots we have have played, with many bonus features built into it as well as scenes from the actual television series. The Crime Family Free Spins feature has four modes (Soldier, Capo, Boss and Family) each of which offers something better as you advance. For example in Soldier mode you get 25 free spins plus 5 additional spins each time you land the Christopher Moltisanti symbol in the middle reel, Capo mode offering 20 free spins plus multiplier beginning between 2x and 5x, the Boss mode offering 10 free spins plus 2-5 random wilds each spin, and Family mode offering 10 free spins but the reels only feature wild, scatter family member symbols which makes for very large wins. The slot also features a Raid bonus feature (you have four envolopes of cash and must choose between four locations where to hide it, then the cops raid two of the locations), a Stolen Goods feature (you have three picks and must choose between 10 containers, each of which contains a cash prize), and the Bada Bing Bonus feature (you must select between Artie, Bobby, Christopher, Johnny or Paulie, and you are then shown a video from The Sopranos featuring the chosen character entering Tony’s office, and then awarded a cash prize).

The most popular Gangster movie of all time is The Godfather which was released in 1972 and remains one of the best movies of any genre in many critics eyes. The movie revolves around the fictional Corleone crime family based in New York headed by ‘Godfather’ Vito Corleone (played by Marlon Brando) and is based around Michael Corleone (played by Al Pacino) who wants nothing to do with the family ‘business’ but when his father is the target of an assassination he steps in to gain revenge. The movie proved so popular that there was two sequels released (Part 2 in 1974, and Part 3 in 1990). You may be wondering why we haven’t listed any details of a Godfather slot machine yet. Well that’s because the main one online was released by bwin.party but is very basic and doesn’t do the movie justice in our opinion, especially when compared to the WMS Godfather slot machine you can find at brick and mortar casinos in Las Vegas.