Scarface is one of the most popular films every created. Starring Al Pacino as Cuban refugee and eventual drug kingpin Tony Montana, it is a true cult classic that is probably even more popular now, thirty years later, than it was when it was first released. Now, Net Entertainment has released a Scarface slot machine that brings all of the excitement and drama of the original film back to the world of online slots. This is easily one of the most exciting games ever released by NetEnt, and is a must play for anyone who has any interest at all in the film. And with big prizes and plenty of fun bonus rounds, Scarface should be fun for those who just like a good slot machine, too. 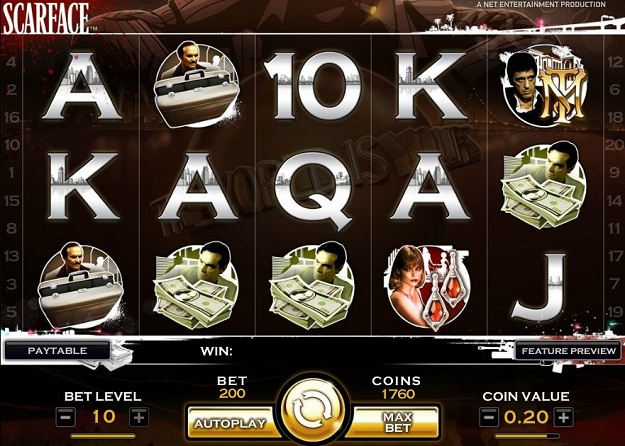 How To Play Scarface Slots

Scarface is a 20-payline, five-reel slot machine that can be found at most casinos offering games from Net Entertainment. Players can wager up to ten coins on each line, and with coin sizes ranging from a penny to $1, there’s a wide range of betting options available for players to choose from.

The object of the game is to match symbols from left to right across your paylines. There are numerous symbols that can award prizes, with the standard tens through aces offering low payouts, and characters from the Scarface film having larger prizes attached to them. Hit three or more in a row and you’ll win a prize, with the biggest payouts coming if you line up five of the same symbol on a payline.

There are also three special stacked wild symbols that can appear on the screen – one each for the second, third and fourth reels. Each of these wilds can substitute for any normal symbol in making winning combinations. In addition, each is also attached to a unique special feature that’s activated should you land the entire stacked wild across the reels.

First, on reel 2, there’s the nudge wild. This activates a sticky wild game that continues until the nudge wild is entirely off the screen. On the fourth reel, you can activate the free spins game, which awards 15 spins with bonus multipliers. The free spins game can also be retriggered, potentially winning you even more free plays. Finally, there’s the incredible bonus game that can be triggered on the third reel – but we’ll talk about that more later.

This should go without saying, but the Scarface slot machine features one of the very best themes we’ve ever seen in the world of online slots. The music, the clips from the film, and the entire style of the game feels completely faithful to the film, which should make this game a thrill for fans of the movie.

Nowhere does this stand out more than in the Tony’s Last Stand game. This is an iconic scene in the history of film, and the bonus round lives up to the film in providing a confrontation that feels as epic and spectacular as the original. If you’re a big fan of the film, you’ll appreciate not only the way they put together this game, but the small touches throughout the game that are faithful to the film and will remind you of your favorite Scarface moments.

In a game about Scarface, how could anyone but Tony Montana himself be the game’s most lucrative symbol? Hit five of the Tony symbols in a row on a single line, and you’ll win 2,000 credits for every coin wagered. Five of Elvira Hancock (Michelle Pfeiffer) is also quite valuable, returning 1,000 credits per coin.

This one isn’t even close: the best feature in the Scarface slot machine game is definitely the bonus game based on the climactic scene from the movie. If you hit the bonus game icon on the third reel, you’ll first see a clip in the movie of the hit squad approaching Tony’s mansion. You’ll then take control as Tony stands atop his staircase while waves of attackers come after him.

The goal in the game is to help Tony survive for as long as possible. Each round, the goons will move closer, and then you’ll be awarded the chance to fire either bullets or a grenade at the oncoming gang. If you’re firing bullets, you can take out any one attacker of your choice. However, the grenade has an area effect, allowing you to eliminate many enemies at once. If an enemy should reach Tony, the game is over, and you’ll see the clip from the movie of him falling into the pool below.

What makes this game really interesting is that every attacker has a coin value prominently displayed below them. This allows you to incorporate a little strategy in your play. Do you want to fight off the closest attackers? This is usually the way to go, but sometimes a very high value target can be tempting, too. Of course, if you’re in a situation where you just can’t survive, it’s best to take out whatever you can to get as many points as possible. At the end of the game, your earned credits are added up, and you’ll be awarded the total number.