Whether you see them as a means to freedom or a nuisance, one thing’s for sure: motorcycles are cool. That’s why it’s no surprise that Betsoft has made a slot machine which features a biker gang as the game’s major theme. From dramatic races to dive bars, everything you know about bikers is covered in this fun online slot.

But Slots Angels isn’t just about the bikers. There’s a very fun and potentially lucrative slot machine here, filled with special features that offer players numerous ways to win big prizes out of nowhere. Between the very cool multiplier respin feature and the game’s progressive jackpot, Slots Angels always gives you the opportunity to win a fortune on the next spin. 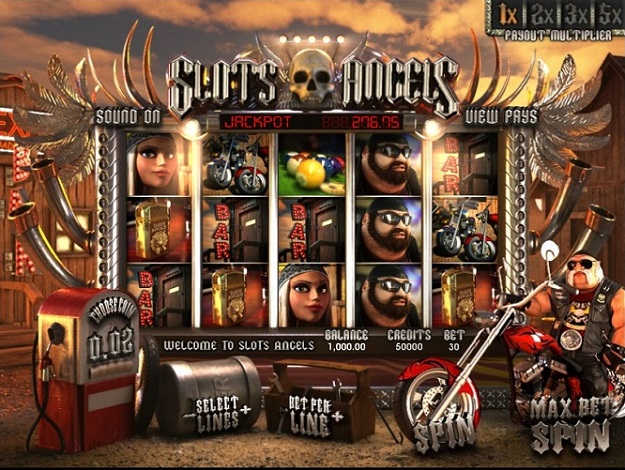 Slots Angels is a 30-payline, five-reel slot machine that was produced by Betsoft. It’s a part of Betsoft’s 3D slot machine line, which means it features a number of animated characters and enhanced graphics that help the game stand out from the crowd. Players have the option of playing as few or as many paylines as they wish, and can play up to five coins (at a variety of different denominations) on each line.

The main focus of the game is classic slots action, which means you’ll be matching identical symbols from left to right across your active paylines. There are eight different winning symbols, each of which requires three consecutive symbols to win a prize. The biggest prizes are reserved for three of the members of the game’s biker gang.

There are several special features to look out for during game play. If you should happen to hit three dartboard symbols anywhere on the reels, you’ll instantly trigger a “pick me” game. You’ll be asked to choose between the dartboards; pick one, and you’ll reveal a prize that is usually worth a few hundred credits.

In addition, players also have the chance to pick up some free spins by hitting three or more bottle symbols on the same spin. When this occurs, you’ll not only be awarded with some free spins on the reels, but the center reel will be locked as completely wild for all of these spins.

Finally, we really enjoyed the Biker Race Bonus Round. In this game, you’ll be prompted to choose which of three bikers you think will win an upcoming race. Pick your favorite, and then watch what happens as the three riders jockey for position. You’ll win an instant credit reward based on how well your biker performs!

No matter how much fun a slot machine is, the game’s theme can make or break the experience for players. In the case of Slots Angels, the theme definitely adds to the enjoyment of the game. There was clearly a lot of work put in to making the biker theme as engaging as possible, and it shows in everything from the game’s graphics and animations to the way the bonus games and icons all fit together perfectly. Of course, the graphics and sounds are all top notch, but you’d expect nothing less from Betsoft.

One of the best touches is the song that plays when you first fire up the machine. The song, which we’ve titled “Playin’ Some Slots,” sounds a lot like another song you’ve probably heard once or twice, but that’s okay: the fact that the music both supports the theme and makes you laugh at it just a little bit – all while helping support the game’s overall theme – really adds to Slot Angels’ fun factor.

Depending on how you play Slots Angels, you’ll be shooting for one of two major jackpots. However, in either case, the goal is the same: you’ll want to match five of the fat biker on the same payline.

Most of the time, this combination is valuable, if not spectacular or life-changing. During normal play, hitting five bikers will earn you a prize of 300 credits for each coin you’ve wagered. If you bet the full five coins per line, that’ll bring in a prize of 1,500 credits — certainly a prize worth winning. When you factor in the potential for respins with even bigger winnings, it’s easy to see how you can win a lot of cash quickly on the reels.

If you bet the maximum number of coins and paylines, however, you’ll have an even bigger prize to shoot for. Should you make the max bet and hit five big bikers on the first payline (that’s the one that runs right down the center line of each reel), you’ll win the game’s progressive jackpot. This jackpot isn’t one that will earn you millions of dollars, but it is a nice prize that’s usually worth several thousand (and sometimes tens of thousands) in credits. Keep in mind that you have the same chance of winning this jackpot no matter what denomination of coins you choose to play with: each denomination has a separate jackpot, giving players of all levels the opportunity to strike it rich.

In Slots Angels, there’s a feature that you’ll encounter each and every time you score a win on the reels. But despite the fact that this feature is extremely common during gameplay, it’s still among the more exciting bonus rounds we’ve played on any Betsoft machine.

This feature is known as the Reel Respin. Each time you make a winning combination (not counting wins that trigger special features – just regular wins made by combining symbols), you’ll be awarded all of your prize money. In addition, the Payout Multiplier will move up a notch, going from 1x to 2x. At that point, you’ll watch the center reel respin, potentially winning you another prize at the new multiplier level.

But that’s not all. If you win again, you’ll earn an additional respin, and the multiplier bar will move up to 3x. Win one more time, and the multiplier moves up to the maximum level of 5x. At this point, you’ll keep winning at 5x the normal rate until you have a respin that results in no winning combinations.

We love this feature, as it means that every single spin gives you the chance to win a huge prize. Even a small win can quickly become enormous if you hit the right combinations on your respins, and if you have a few potential wins on the reels, there’s a good chance that you could keep triggering wins again and again.