Tony and the gang are back! Software developer Playtech has teamed up with HBO to release The Sopranos slot machine – the latest in their long line of TV themed slots. Playtech have done the series proud and fans of the television series (and slot players in general) will love this slots game, with actual clips from the TV series featured in the slot, and lots of bonus features on offer!

The Sopranos is a 5-reel, 25-payline video slot machine which can be played for real money from 25p to a staggering £1,250 per spin. Symbols used in the slot will be familiar to fans of the show with six characters featuring on the reels – Tony (who also acts as the games Wild symbol), Paulie, Johnny, Christopher, Bobby and Artie, as well as your standard A, K, Q, J, 10 playing card symbols which are pictured alongside various items including a watch, wine bottle, glass of whiskey, cigar, and poker chips. The Sopranos logo is featured and acts as the Scatter symbol, as well as a ‘Bada Bing’ icon, and a container symbol (each of which can trigger different bonus features (which you can learn more about below). Here is a screenshot of the Sopranos slot machine: 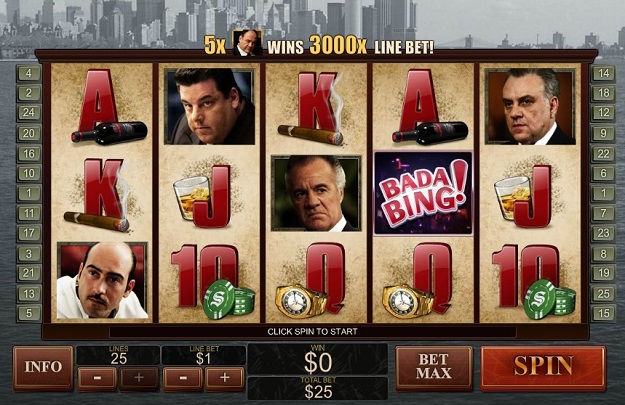 Raid Bonus Feature – This feature is activated totally randomly when playing the Sopranos slot machine. When you trigger it you will be taken to another screen where you will see four envelopes of cash (each one worth double the stake you play for) and four locations (the closet, a container, the ceiling, and the floor). You then have to hide the four envelopes wherever you think the police won’t look (and can hide them all in one place if you wish – for a possible 8x win). Two premises are then raided and you win any remaining cash from the locations they never raided, if you were lucky enough to avoid them.

Bada Bing Bonus – This feature is activated by landing three Bada Bing symbols on reels 2, 3 and 4. You are then taken to another screen where you are faced with five of the characters from The Sopranos (Artie, Bobby, Christopher, Johnny and Paulie), and must select one to meet with Tony. Once you make your selection a clip from the television show is shown of your character meeting Tony, and if you’re lucky they give him something (whether it be cash or wine) and you win credits. Often you get to pick two or three characters until the bonus feature ends.

Stolen Goods Bonus – To trigger this feature you must land the container symbol on reel one and five. You are then taken to a screen where you will see ten containers as well as a list of cash values (which is how much each container holds, but randomly). You are given three picks and then have to select a container and once you see it’s value, can exchange it in the hope of selecting one with a higher value.

Crime Family Free Games – This is the best and most rewarding feature of the Sopranos slot machine, and is triggered by landing three or more of the Sopranos logos (the Scatter symbol) on the reels. There are four different levels in the Crime Family Free Games mode, three of which must be unlocked in order from left to right on screen. In order to unlock the next modes you will need to land the Scatter symbol, with three awarding you with one unlock point on the progress bar, and four or five Scatters awarding you with two progress points. The free spins modes are:

Soldier – This is the very first level of the bonus feature and will see you rewarded with 25 free spins, and the Christopher Moltisanti symbol substituting as an extra wild, and if you manage to land it right in the middle of reel three you will have five free spins added on (this can prove very rewarding, we got up to 38 free spins at one point when reviewing the game).

Capo – Capo mode sees players awarded with 20 free spins with a multiplier bonus of between 2x and 5x. Player should watch out for a Paulie ‘Walnuts’ Gaultieri symbol because if he appears on the reels the multiplier bonus increases by one, however if Paulie doesn’t appear on screen it decreases by one.

Boss – When you reach Boss mode you are given 10 free spins which include 2-5 extra Wilds each spin, and if you manage to land a Wild symbol on the center of reel three you are rewarded with an extra five free spins.

Family – Family mode is the final level of the Crime Family Free Spins feature and players are given 10 free spins with only character symbols and Wild and Scatter symbols appearing on the reels. This creates some massive wins, with the Wild doubling any wins, however the bonus game can’t be retriggered via Scatter symbols in this feature.

The Sopranos was created and written by David Chase and became one of the most popular television series of our generation, with millions of viewers every single episode. Set in New Jersey, The Sopranos told the story of Italian-American mob boss Tony Soprano (played by the late James Gandolfini) as he conducted his daily activities, juggling family matters with his criminal ‘business’ matters. The first series went live on HBO in 1999 and proved so successful that subsequent series followed, culminating in series six, for a total of 86 episodes. The show won many awards (including five Golden Globes), however the final episode caused a lot of controversy with how it’s final episode ended. Don’t worry we aren’t going to spill the beans in case you’re yet to watch the television series!