Rocky Balboa is one of the iconic characters in the history of American cinema. The boxer, played by Sylvester Stallone, first appeared in “Rocky,” which won an Academy Award for Best Picture. Over the next three decades, five sequels to the film were produced, each pitting Rocky against new foes in the ring.

The Rocky slot captures the excitement and drama of the Rocky films. Not only will you see all of your favorite characters from the series, but you’ll also have a chance to join Rocky in the ring as he takes on some of his greatest foes. Defeat them, and you’ll win a big slice of the championship purse. 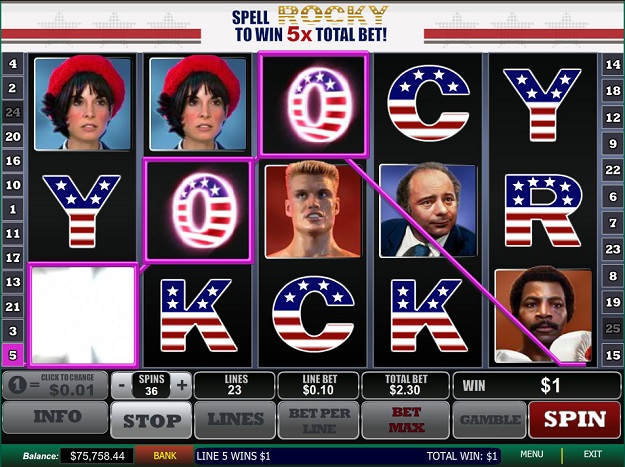 As with most slot machines, the object of the game is to match identical symbols across your active paylines, with only matches running from left to right counting as wins. There are ten different symbols available to match in standard winning combinations. The lower value symbols are represented by the letters in Rocky’s name, though if you can spell out his name over a single payline, you’ll actually win 5x your entire bet for that spin.

Higher value symbols are represented by various characters from the film series: Adrian and Paulie, as well as three of Rocky’s most famous opponents: Clubber Lang, Ivan Dragon, and Apollo Creed. In all cases, you’ll need at least three of any of these symbols in a row in order to claim a prize.

There are also a number of special symbols that can earn you additional prizes. It should come as no surprise that Rocky himself makes an appearance on the reels; he acts as the wild symbol, substituting for any of the symbols we’ve mentioned above to make winning combinations. Rocky himself can also make his own very large prizes if you match three or more of him in a row.

The Italian Stallion logo is used as a scatter symbol for this machine. Match two or more of these symbols anywhere on the reels, and you’ll win prizes based on the total amount you wagered on that spin. Finally, there’s a bonus symbol that can trigger a special feature in which you’ll head into the ring with Rocky.

There are two true special features in the Rocky slot machine. The first is attached to the scatter symbol. If you hit three or more scatter symbols anywhere on the reels during a spin, you’ll trigger a free spins round. This game awards anywhere from 15 to 25 free spins, depending on how many of the scatter symbols you’ve actually hit. As an added bonus, these free spins come with a 2x multiplier, making them twice as valuable as normal spins.

The most exciting feature in this game is the Knockout Bonus Round, which is activated any time you hit the Bonus Glove symbols on both the first and last reels (click here to learn more about how bonus rounds work). In this game, you’ll take Rocky in the ring against your choice of three opponents: Apollo Creed, Ivan Drago or Clubber Lang. You’ll then get to watch Rocky fight, winning and losing each of the ten rounds in the fight. Each time Rocky wins a round, you earn bonus credits! At the end of the fight, Rocky will always win in a knockout; if this happens earlier than the final round, all of the remaining rounds will be scored as wins for Rocky as well, earning you additional bonuses.

Without a doubt, the biggest prize available on the reels occurs when you match five wild Rocky symbols on a single payline. This pays out at the incredible rate of 10,000 credits for each coin you’ve wagered on that payline. If you’ve played for $5 per coin and wagered the maximum of ten coins, that means you can win $500,000 by hitting this combination – now you know why Rocky is one of the best real money slots online. Even betting a single penny on a line makes this combination worth $100!

The Rocky movies were all about hard-hitting action in the ring and high drama outside of it, and this slot machine definitely captures the atmosphere of the film series. When you score a win with any of the character symbols, you’ll get to see a short clip featuring that character from one of the films. In the Knockout Bonus Round, you’ll be treated to even longer clips of Rocky in the ring against the opponent of your choice. Both the music and sound effects in the game are appropriate to the theme, featuring heroic flourishes and just the right amount of dramatic touch you’d expect from anything associated with Rocky.