Time to wrap up and enjoy a few spins with The Mummy, a 5-reel, 25 pay line slot from Playtech. This game is based on the 1999 fantasy movie that starred Brendan Fraser, Rachel Weisz and Dwayne ‘The Rock’ Johnson-lookalike Arnold Vosloo as High Priest Imhotep. Imhotep was a Pharaoh’s advisor who betrayed his master and was executed, only to be resurrected 3,000 years later as ‘The Mummy’ of the movie. The film spawned two sequels: The Mummy Returns in 2001, in which Dwayne Johnson did appear as ‘The Scorpion King’, and who also later appeared in the spin-off/sequel movie in 2002 of the same name. 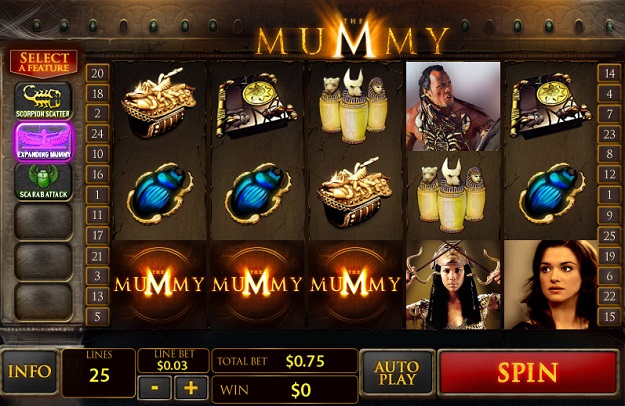 The Mummy Gameplay and Symbols

The symbols used in this slot are all taken from the movie, including the four main acting talents and some other aspects of Ancient Egyptian paraphernalia. They obviously did not have playing cards during the time of the Pharaohs, as for once they are absent from the reels.

Winning is simply a case of landing three identical symbols in sequence on an active pay line from the left-hand reel. There are plenty of possible payouts, from 5x your bet-per-line for three scarab beetles, pairs of pistols or Egyptian urns, to the jackpot of 10,000x for five of the hero of the movie, Brendan Fraser as Rick O’Connell.

Once you’re happy with your settings, hit the ‘spin’ button to send the reels tumbling.

Wild Symbol: High Priest Imhotep in ‘The Mummy’ mode acts as the wild symbol, and substitutes for all other symbols aside from the scatter symbol, the ‘Mummy Hunt’ symbol and the free games symbol.

Scatter Symbol: ‘The Mummy’ logo acts as the scatter symbol. If you land at least three of them anywhere on the reels after a spin, you win a cash prize.

Lost City Adventure: This feature is triggered randomly during the main game. You travel to the lost city of Hamunaptra, where you pick from six boxes. If a box contains a cash prize you win that amount, but if you find a ‘collect’ symbol the round ends.

‘Collect’ also opens the feared ‘Book of the Dead’ unless you’ve unlocked all eight bonus features already. Each time the book opens you are awarded one of eight bonuses:

• Scorpion Scatter – an extra ‘Scorpion Scatter’ is added to the reels.
• Expanding Mummy – all wild symbols become expanding wilds.
• Scarab Attack – any wild symbol appearing on reel three triggers two more random wild symbols on reels two and four.
• Collapsing Reels – winning symbols disappear to be replaced by new symbols.
• Mummy Power – each wild symbol appearing on a winning line acts as a 3x multiplier.
• Mummy Re-Spin – a wild freezes the reel it appears on and re-spins occur until a win is obtained.
• Free Game with Super Spin – if the free games symbol lands on reels 1, 3 and 5 at the same time during a spin, you win five free games and one super spin. During the free spins and wilds are collected at the side of the screen and the distributed randomly on the central three reels for the one, super spin.
• Mummy Hunt – if the Mummy Hunt symbol lands on reels 1 and 5 simultaneously you trigger the mummy hunt bonus game. You navigate down tunnels killing mummies as you go. The more you kill, the more cash you win. The game ends if you reach a dead end.

Once you gain a feature it remains part of the game and you can choose any one feature that you’ve won for each spin that you play.

If variety is the spice of life, then ‘The Mummy’ could be said to be the spice of slots! There’s very few slots games that have so many potential features, and the idea of collecting features as you play, and then electing which ones to use per spin, is a wonderful innovation from Playtech.

In the movie, Fraser and his pals entered Imhotep’s realm in the search for riches, but instead disturbed something very nasty indeed. Let’s hope you’re more successful!