Long one of Marvel’s most popular superheroes, Iron Man has had a resurgence in popularity thanks to the recent movies that have featured businessman Tony Stark and his high-tech, high-powered suit. Now, Playtech has created a slot machine that captures the action and adventure of the comic book series, combining exciting bonus rounds with huge payouts to make a game both Marvel fans and slots veterans can love. 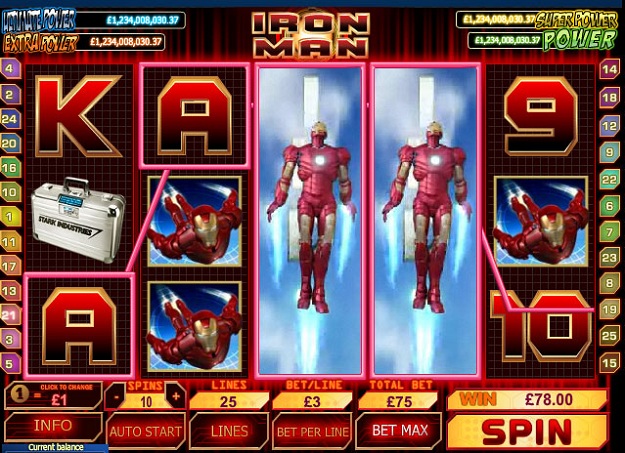 Iron Man is a 25-line, five-reel slot machine that’s available at most casinos using Playtech software. Players may choose to play at denominations ranging from a penny to $5, and can wager up to ten coins per line. This makes the maximum bet a whopping $1,250 per spin, while still allowing players to play for as little as $0.01 a pull if they so desire.

For the most part, Iron Man follows conventional slot machine rules. The object of the game is to match symbols from left to right across your active paylines; the more symbols you match, the bigger the prizes you’ll win. In total, there are 11 different instant pay symbols, as well as one special symbol you’ll want to keep your eye on during play.

The basic symbols are pretty standard fare for Playtech slots. All of the lower-paying symbols are based on playing card ranks, and range from nines and tens up through aces. For all of these symbols, you’ll need to hit at least three-of-a-kind in order to win a prize. The same goes for missiles, the Stark Industries briefcase, and Tony Stark himself, all of which pay somewhat more than the card ranks.

The biggest prizes are attached to two different Iron Man symbols you can find on the reels. One of these symbols has the hero flying through the air, while the other has him on land, striking a defiant pose. Both of these offer the same large prizes to players. In addition, you can actually mix these symbols on the same payline to win a prize as well; while this “mixed pay” prize isn’t as large as the one you’d get for matching the same Iron Man symbol across a payline, it’s still the second largest prize in the game.

Unlike many of Playtech’s real money slot machines, Iron Man is not big on special symbols. In fact, other than the icons we’ve already mentioned, there’s just one additional symbol to talk about. The Iron Man logo acts as a scatter symbol. Hit two or more of these symbols anywhere on the reels, and you’ll instantly win a prize equal to up to 100 times the amount you wagered on that spin.

There are two special features worth noting on the Iron Man slot machine. The first is the Expanding Wild feature that occurs whenever you hit a full row of Iron Man icons on the second, third or fourth reel. When this occurs, those symbols will join up into one large Iron Man image that covers the entire reel, making the full reel wild for that spin.

The other special features occurs whenever you hit three or more of the Iron Man logos anywhere on the reels. This triggers the Missile Attack Bonus. In this game, you’ll help Iron Man shoot down missiles that are about to hit a city. Each time you shoot a missile, you’ll win a cash prize, a number of free spins, or a multiplier for you winnings during those free spins. Once you’ve revealed both a free spins number and a multiplier, you’ll move on to the free spins portion of the game.

Iron Man uses much of the iconic imagery from the series it takes its name from. You’ll see a mix of icons featuring Iron Man himself fighting in dangerous situations and Tony Stark navigating the world of high-stakes business. The music in the game feels like it could have come from an action movie, which is exactly what you want to hear when playing a game of this type. The red on black color scheme features a modern technological look – again, perfect for a game about one of the most technologically advanced heroes in the Marvel universe.

The biggest prize available on the reels comes from hitting five of either Iron Man symbol on any active payline. This combination pays out at 5,000 credits for each coin wagered. If you’ve wagered the maximum of $50 on a single payline, this can win you a massive prize of $250,000!

Another major prize is available through the Marvel Progressive Jackpot game. This game is triggered randomly during play, with your odds of triggering it based only on the amount you wagered on each spin. In this game, you’ll reveal symbols until you make three-of-a-kind, at which point you’ll win one of four associated jackpots. These range from the small Power Jackpot to the enormous Ultimate Power jackpot, which is currently worth over $678,000!