Iron Man 3 is the third instalment in a series of slots from Playtech, all of which form part of Playtech’s Marvel range of online slots. This slot has 5 reels, 25 possible pay lines plus a handful of bonus features.

The game is based on the third movie in the series of films made since 2008, all starring Robert Downey, Jr. as Tony Stark/Iron Man. Iron Man himself made his first appearance in Marvel Comics in 1963, created by comic legends Stan Lee and Jack Kirby, among others. Stark is a hyper-rich engineering genius who creates his Iron Man suit after suffering a severe chest injury when kidnapped by terrorists. The suit gives him a range of super-hero-like powers such as superhuman strength and the ability to fly. 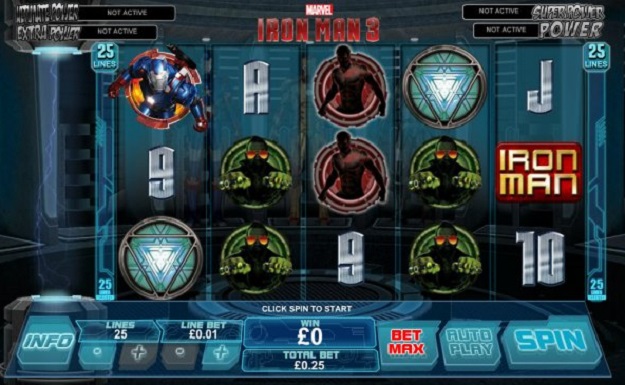 The symbols used in this slot are all taken from the movie Iron Man 3, which was released in 2013. Iron Man takes a prominent role of course, but he is also joined on the reels by his allies in the movie, including ‘War Machine’ who is played by Don Cheadle in the film. Steel-themed playing card values from nine to ace also make an appearance.

The game has twenty-five possible pay lines, and you can select from between one and twenty-five pay lines to have in play with each spin. You can also choose your bet-per-line from 0.01 to 10.00, giving you a range of wagers-per-spin from 0.01 to 250.00.

You win payouts by landing at least three (or in the case of the Iron Man suit symbols, two during re-spins) symbols in sequence from the left-hand reel on an active pay line. There are plenty of possible payouts, from 5x your bet-per-line for three nines or tens, to the jackpot of 10,000x for five ‘Unibeam’ symbols.
Once you’ve selected your coin value and lines, power up and hit the ‘spin’ button to let the fun begin.

Wild Symbol: The triangular Unibeam symbol acts as the wild symbol, and substitutes for all other symbols aside from the scatter symbol.

Scatter Symbol: The Iron Man logo acts as the scatter symbol, and landing three anywhere on the reels wins a pay out, plus entry into ‘Hall of Armor’ free games mode.

Hall of Armor Free Games: If you land at least three scatters anywhere on the reels, you get to pick from three possible free game modes:

• Mark 42 – 10 free games with freezing wilds. Any Unibeam wild symbol that appears during free games will freeze in position for three spins. If you land the Iron Man symbol on reel three, you win three more free games.

• War Machine – 8 free games with random wilds. On each spin three random wild symbols are distributed across the reels. Landing the war machine symbol anywhere on reel three will win you an additional three free games.

Marvel Mystery Progressive Jackpot: There are a total of four Marvel Progressive Jackpots you can win – Power, Extra Power, Super Power and Ultimate Power. The jackpots are triggered at random – but the more cash you wager, the better your chances of winning one. You will be shown a 4×5 grid filled with jackpot symbols. Keep clicking symbols until you reveal three jackpot symbols that are the same, which then means you win that specific progressive jackpot.

Iron Man has been a great addition to the Marvel Universe, and the Iron Man 3 slot is a great addition to Playtech’s range of Marvel-themed slots. The number of different bonus games keeps gameplay interesting, as does the chance of winning one of those gorgeous progressive jackpots. You may not become as rich as Tony Stark, but you could end up with a nicely chunky bank account nonetheless.