The Incredible Hulk is one of the most famous characters in all of Marvel Comics. Numerous movies, television shows, games and (of course) comic books have been devoted to telling the story of Bruce Banner and his gigantic green alter ego. Now, Playtech has developed a slot machine that continues the legend of the Hulk, combining great slots action with everything that has made this character such a classic Marvel character. 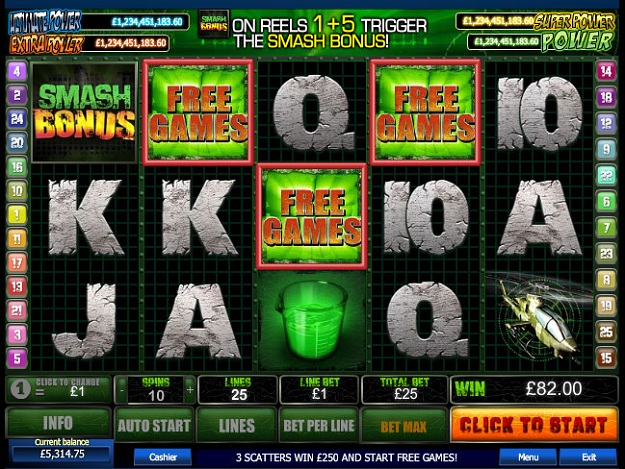 The Incredible Hulk is one of the best Playtech slot machines. It is a five-reel, fifty-line slot that allows players to bet anywhere between one and ten coins on each line. With denominations of coins ranging from a penny to $5, it’s possible to spend a Hulk-sized $2,500 on each spin, if you so desire.

The object of this slot machine is to match symbols from left to right across your active paylines in order to win prizes. There are ten different symbols that award instant prizes when you match them, along with a few special icons that have other effects. The lower value symbols are the “poker rank” symbols that are found on so many slot machines, starting with nines and tens and running up through kings and aces. All of these symbols require at least three consecutive icons in order to win a prize. Higher value symbols include police cars and helicoptors, radioactive liquid, and a radioactivity sign, each of which can win you a small prize even if you only match two on a given payline.

As we mentioned earlier, there are also three special symbols that can earn you additional rewards. First, there’s the Incredible Hulk logo, which serves as the game’s scatter symbol. Landing three or more of these symbols anywhere on the reels will earn you a prize, as well as an additional free spins bonus.

The Hulk himself also makes an appearance on the reels. He acts as a wild substitute symbol, and can combine with any of the normal paying symbols (everything except for the scatter and bonus symbols) to make winning combinations. In addition, landing the Hulk in the right positions will also active a special feature. Finally, the Smash Bonus symbol can also appear on the reels, and is necessary to hit in order to reach the Smash Bonus Round.

Theme and Presentation in The Incredible Hulk

This game has a subdued, green on black color scheme that’s perfect for a game about one of the darker heroes in the Marvel universe. While there aren’t many animations, and the music and sound effects are mostly downplayed, they do enough to suggest a sense of lurking danger. This only surfaces fully when you activate the game’s special features, all of which have the Hulk himself coming out to reek havoc on the reels. Overall, while we wouldn’t call this the most ambitiously presented slot we’ve ever seen, the visual and audio effects are just perfect for the theme and make it one of the best real money slot games around.

Biggest Payouts on The Incredible Hulk

The largest payout on the reels in The Incredible Hulk comes from hitting five of the radioactivity signs on the same active payline. This pays out an amazing 4,000 credits per coin wagered on that line. If you bet the maximum on a single line – $50 – that would mean that you would win $200,000 by hitting this combination! That’s one of the largest non-jackpot prizes we’ve seen on any online slot machine.

However, there’s even a bigger prize that you could possibly win while playing this machine. The Incredible Hulk is part of the Marvel Mystery Progressive Jackpot system. This randomly awarded jackpot can be unlocked on any spin, regardless of that spin’s result. If you do activate this game, you’ll have to choose symbols from a 4×5 grid until you unlock three of the same symbol. Which symbol you match three of will determine which of four jackpots you win: Power, Extra Power, Super Power or Ultimate Power. The Ultimate Power jackpot is extremely large, rising to over $675,000 at the time of this writing!

Besides the Marvel Jackpot, there are several special features that are specific to The Incredible Hulk. For instance, if you hit three or more Incredible Hulk logos anywhere on the screen, you’ll earn ten free spins. During these free spins, all wins will be tripled, making these spins extremely valuable. Easy to see why this has become one of the best Marvel slots to play online, eh?

Next up is the “Expanding Hulk” feature. If you land a wild Hulk symbol anywher on the third reel, the Hulk will expand to fill up the entire third reel, making it wild. This wild reel will also hold over for your next two spins, giving you an excellent chance to score big wins. If you should land Hulk symbols anywhere on all three center reels on the same spin, you’ll unleash a massively expanding Hulk that takes up all three reels and makes them wild. Obviously, this will trigger some enormous wins for you, and best of all, you’ll get one respin where those three wild reels remain in place!

Finally, landing the Smash Bonus symbol on both the first and last reels will activate the Smash Bonus Round. In this game, you’ll take control of the Hulk as he fights off the authorities. Smash three police cards to earn cash rewards, then smash a helicopter to find out what mulitplier will apply to those wins. If you’re especially lucky, the Hulk’s infamous rage might kick in, causing him to smash all seven police cars for extra winnings!