Captain America is one of the oldest and most beloved superhero in Marvel Comics. A World War II hero given a super serum to make him the perfect human, the captain is truly an All-American hero who has fought alongside the Avengers and other famous superhero teams. Now, online slots players can enjoy the adventures of this legendary hero in the Playtech Captain America slot machine. 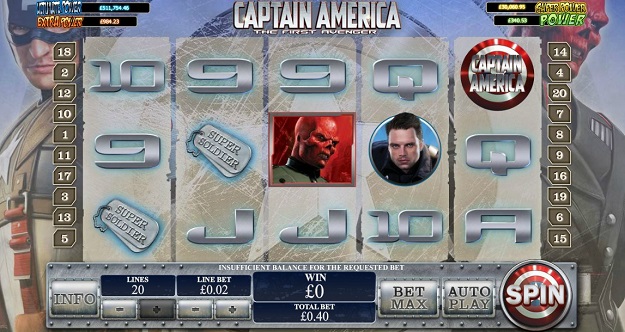 Captain America is a five-reel, 20 payline slot machine that can be played at any Playtech-powered casino site. Players can only use one coin on each line, but the size of that coin includes denominations that range from €0.01 to €5.00, offering plenty of options depending on how much you want to spend on each spin.

The object of this game is to match symbols from left to right across the reels, with three in a row needed to trigger a win in most cases. The most basic symbols are the poker card ranks, ranging from nines through aces. Larger wins can be found if you match symbols that are related to Captain America or his nemesis, Red Skull. For instance, you might match three or more super soldier dog tags (for Captain America), or red crosses (Red Skull). The biggest wins of this type comes if you match each character’s logo: hit five in a row, and you’ll win 2,000 credits.

Captain America and Red Skull act as wilds in this game. Either one can substitute for any basic symbol, or as a 2x multiplier if it is substituting for the symbols related to that character. They can also win on their own if you hit two or more wilds in a row, up to 5,000 credits if you match five on the same line.

Captain America’s shield also makes an appearance, acting as this machine’s scatter symbol. Hit two or more on the screen at once and you’ll earn a prize, up to 100 times the total cost of your spin if you hit five.

When you activate this feature, you’ll initially win four free spins. You’ll then be taken to a second screen where you can reveal additional bonuses by picking from nine hidden symbols. The features you might unlock include:

• +1 Multiplier: All of your wins will be multiplied during your free spins, first to 2x and potentially as high as 3x.

• Free Games Retrigger: This will put a symbol on reel three that can trigger four more free spins during the bonus round.

• Captain America/Red Skull: The appropriate character will turn into an expanding wild that can cover a full reel.

• Super Spins: You’ll receive two “super spins,” one for the villain and one for our hero. On each spin, more of the appropriate character will be added to the reel, that character’s symbol will become an expanding wild, and the symbols belonging to the other character will be removed from the reels.

• Collect: This symbol will end your picks, and take you to your free spins.

Marvel Progressive Jackpot: This feature can be randomly triggered on any spin, but the probability of hitting it is based on the amount you spent on your spin. If you hit this bonus, you’ll see 20 squares, and you’ll have to start selecting them. Each will reveal a symbol that belongs to one of four “power” jackpots of different sizes. Once you’ve revealed three of a single symbol, you’ll win that jackpot. Unlock the Ultimate Power jackpot, and you can potentially win millions!