If you love this team and want to get even more Fantastic Four action, you’ll want to check out the Fantastic Four online slot machine at your favorite Playtech casino. Not only does this game bring the adventures of Mister Fantastic, the Invisible Woman, the Human Torch and Thing to your computer, but it’s also a great way to get your shot at the amazing Marvel jackpot. 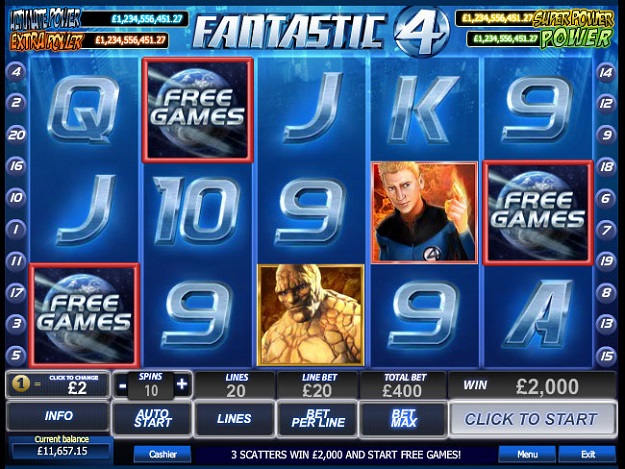 The Fantastic Four is a five-reel slot machine that can be found at most Playtech casinos. Depending on where you play, either or both of two versions might be available: a 20-line game and a 50-line game. The gameplay is pretty similar in both, though you can of course bet more coins in the 50-line version.

Speaking of coins, you’ll have plenty of options on this machine no matter what kind of budget you’re playing with. Coin sizes typically range from €0.01 to €2, and players can bet up to ten coins per line, meaning it’s possible to bet hundreds of euros on a single spin if you’d like to.

The basic symbols in this game are, as usual, the card game ranks ranging from nines through aces. For a bigger win, you’ll want to match one of the four heroes across an active payline. Hit five of Mister Fantastic in a row, and you can earn 2,000 coins for each coin you wagered.

Even better is hitting the Fantastic Four symbol. This wild will substitute for any of the standard symbols, but it also comes with its own prizes if you hit two or more in a row. Match five and you’ll be awarded with 10,000 coins – the largest available prize on a standard spin. There’s also a scatter symbol (the Earth) that can earn you up to 200 times your bet.

There are two major bonus features to watch out for during the Fantastic Four slot machine: the free spins game and the Marvel Jackpot.

Free Spins Game: Hit three or more scatter symbols on the same spin, and you’ll be awarded with 12 free spins. These spins come with stacked versions of each of the four team members on the center reel. Should you cover the entire middle reel with a single character, you’ll earn the associated bonus.

For Mister Fantastic, this means four extra spins as well as an expanding wild version of his symbol that becomes available on all reels. The Invisible Woman gives you four extra spins with an increasing multiplier each time she appears on the reels. The Human Torch adds four spins during which the first reel is entirely wild and he replaces all of the other character symbols on the reel, making it even easier to score wins. Finally, The Thing will earn you just three spins, but every Thing symbol you hit will stay in place and act as a wild.

Marvel Jackpot: The Marvel progressive jackpot game can be triggered at random on any given spin. The odds of making this game appear are based on the amount you spend on a spin, but all spins are eligible for the same size prizes no matter how many coins you play.

Should you trigger the progressive jackpot feature, you’ll get to play a mini-game in which you reveal hidden symbols from a grid. Once you match three of the same symbol, you’ll be awarded with one of four associated jackpots. These can range from the Power Jackpot, which is worth just a few hundred Euros, to the Ultimate Power Jackpot, which starts at €100,000 and has awarded well over €1 million in the past!