The Tycoons slot machine is designed to give all of us a little taste of the high life. In this game, you’ll be transported into a world where the rich and famous play high stakes poker and enjoy all of the luxuries of excessive wealth. With special features that pay out huge sums of money and plenty of high paying symbols on the reels, this Betsoft slots game might just turn you into a tycoon yourself! 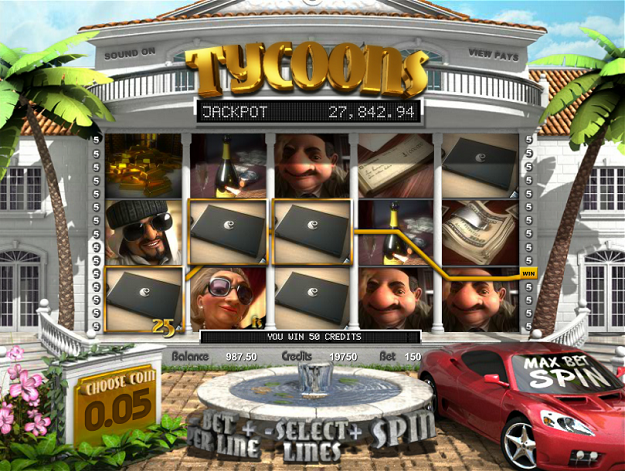 As with the rest of the Betsoft 3D slot machine line of games, Tycoons is a 30-line slot with five reels of play. It features the same extensive animations as most of the games in the 3D series, along with the beautiful graphics and sound that these games are famous for. In the case of Tycoons, you’ll be playing in a luxurious mansion, with the sounds of a fountain accompanying your play.

The object of the game is to match as many of the same symbol as possible, ranging from low value symbols like champagne and sports cars, to bigger prizes that are awarded for cash and gold symbols. The biggest prizes are attached to the four tycoons that are the game’s namesakes. These millionaires can earn you big money on the reels, with the top prize coming in at 500 credits for each coin you wager on that payline! That’s a maximum of 2,500 credits if you wager the full five coins per line.

The basic gameplay of Tycoons is fairly straightforward. There are no wild/substitute symbols, nor is there a scatter feature. There are a few symbols that do trigger special features, however, which we’ll talk about below.

Tycoons features a wealth of special features that are designed to give you a chance to earn your way into the world of the mega-rich. First, there’s a free spins game that can sometimes be triggered when you hit three or more of the same tycoon on the reels. Some of the tycoon symbols has a small “fs” in the lower-right hand corner. If you hit one of these as part of a winning combination of three or more, you’ll earn a number of free spins. Even these free games come with added bonuses; one of the reels will turn into a wild reel, while all winning combinations that feature the character that originally triggered the bonus will earn double their normal prizes.

Like many of the Betsoft games, there is also a special combination of symbols that, when together on the same row, will trigger a bonus. In Tycoon, this occurs when the stack of gold bars, the wad of cash and the checkbook appear (in any order) consecutively on any row, you’ll have the option to pick one of the three to earn an instant prize.

Of the slots bonus games, the most lucrative is likely the poker game bonus round. This game is triggered when you hit three of the poker symbols anywhere on the reels. Once this game is activated, you’ll be sent to a second screen where the four tycoons are seated around a poker table. You’ll pick the tycoon you think will win the hand, and then you’ll watch the action unfold in front of you. The longer your tycoon stays in the hand, the more money you’ll win! This game can definitely result in some big wins; we triggered it early on when testing this machine, and won a 6,000 coin prize when our tycoon won the poker hand.

Finally, no game about the rich and famous could possibly be complete without a progressive jackpot. If you make a maximum bet, you’ll be eligible to win the jackpot, which is triggered when five steel briefcases line up on a single payline. It’s not a huge jackpot – it’s usually in the range of a few thousand dollars – but that’s more than enough to make you very happy if you win!

Tycoons does a great job of taking the theme of the ultra-rich and developing a fully-fledged game around it. Along with the standard slots action, there are a number of thematic bonus games that can earn you even more cash, and the progressive jackpot – which isn’t a standard element in a lot of the Betsoft slot games – is well-placed here, as it would be a strange omission from a game with this theme.

Overall, we can definitely recommend Tycoons to slot players in general, as it provides solid gameplay and the same great graphics and sounds that are standard in any of Betsoft’s 3D slots. The theme itself isn’t likely to excite many players, but it is fun, and definitely doesn’t take away from the game either. While it’s not a standout game, Tycoons is a strong addition to the 3D slot machine lineup.