True Illusions is a Betsoft 3D slot machine that takes place in the exciting world of stage magic. You’ll get to interact with a magician who would fit right in at any cheap Vegas casino – he’ll even do a few tricks for you while you play. Beautiful assistants, magic hats, birds and cards are all a part of his arsenal of tricks, and each can earn you rich rewards on the reels.

Is True Illusions a magical experience, or just another slot machine? Keep reading to find out what we thought about this popular slot machine. 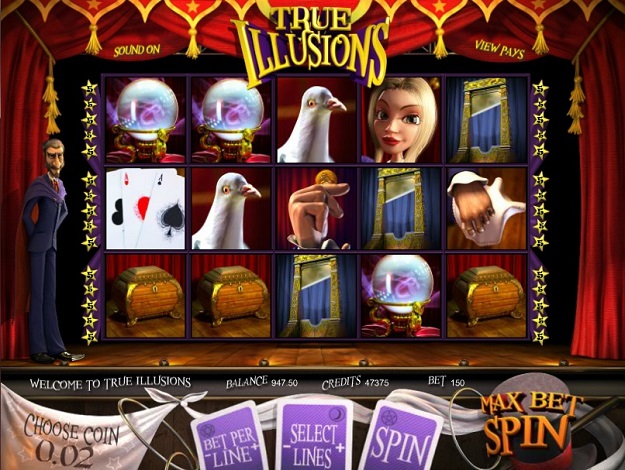 True Illusions is a 30-line, five-reel slot machine that features a magic theme. The object of the game is to match symbols from left to right on one of the active paylines, triggering a win.

Before you even begin playing the game, you’ll notice that True Illusions features the same high quality graphics, sounds and animations that are found in all of the Betsoft 3D slot machines. The game takes place on what looks like an auditorium stage, and the magician himself is constantly talking and doing little “tricks” on the site of the screen, adding to the atmosphere.

While some 3D slots from Betsoft pay out relatively infrequently, but at higher amounts, True Illusions goes in the other direction – offering some smaller payouts that hit more often. For instance, hitting three handkerchiefs will earn you five coins for each coin you wagered on that payline, and hitting a full five handkerchiefs will earn you 25. Other lower value symbols include a magician’s hat, a crystal ball, and a bird.

But that’s not to say that you can’t make a big score if you should happen to hit the right symbols. Bigger wins come along with symbols like the coin trick, guillotine, and the magician’s chest. The biggest of all is the magician’s assistant; hitting five of her will earn you 500 coins. Wager a full five coins at the maximum of $0.50 each and you can win up to $1,250 on a single payline!

One of the cool little features in True Illusions comes each time you have a winning spin. After each win, there’s an animation that shows the illusionist doing one of his trademark tricks – everything from pulling a rabbit out of his hat to making some coins appear out of thin air. This is a trademark of the Betsoft slot machines – these features that make their games just a little bit more interactive and fun to play.

There is also a wild symbol on the reels (easy to spot, as it is just the word “wild”), which can substitute for all of the normal symbols on the wheel, though it doesn’t offer any special multiplier to your wins.

The wild symbols also play a key role in one of the main special features. On the center reel, there are stacked wilds – runs of three consecutive wild symbols that appear together. If you manage to land all three wilds on your reels, you’ll not only make the entire center reel wild for that spin, but you’ll then get to see the magician lock his assistant in the center reel, which keeps the stacked wilds in place for up to seven spins in total. This can lead to some very big wins; we often hit for over 1,000 coins per spin after triggering this bonus!

Of course, the magician himself is a symbol, and serves a special purpose. He acts as the scatter symbol. While there are no prizes directly associated with hitting his symbols, landing three or more anywhere on the screen will result in a free spins mode. During these free spins, your winning combinations will magically disappear, allowing other symbols to fall into place – potentially earning you even more winnings!

Finally, land three or more of the card symbols anywhere on the reels and you’ll activate the “Pick a Card, Any Card” bonus game. This classic magic trick will suddenly become a lot more rewarding for you, as you’ll have the opportunity to choose between any one of the magician’s cards. No matter which one you pick, you’ll earn an instant bonus.

Overall, we had a lot of fun playing True Illusions. The special features aren’t quite as extensive as what you’ll find in some other Betsoft games, but as usual, they fit perfectly with the game’s theme and add plenty to the playing experience. They’re also quite lucrative, making it a real thrill to hit a bonus round.

If you enjoy playing classic slot machines that aren’t overloaded with special features, but still have enough variety to give them plenty of replay value – or you want a dash of magic thrown into your slots play – True Illusions is probably an excellent choice for you.