Rook’s Revenge is a Mayan-themed online slots game from Betsoft with a fixed 25 pay lines and five reels. Rook himself is a Mayan chieftain wearing a colourful feathered head-dress and who is in obvious need of cutting down on the sandwiches. He made his first appearance in Betsoft’s 2009 release Aztec Treasures, and is now back larger than life and twice as ugly, on desktop, mobile and tablet devices.

The Mayans were a civilised ancient people who lived in what is now modern-day Columbia. They loved art and education, but also thought that the best way to please their deities was to offer a living human sacrifice. Fortunately, you don’t have to pay so much to play the Rook’s Revenge slot. 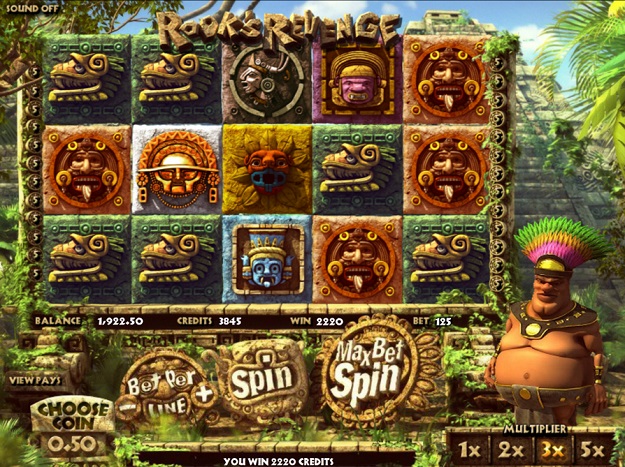 Throughout this game Rook stands to the left of the ‘reels’ swaying slightly and breaking into dance moves whenever you win a pay-out. He’s only wearing a loin cloth to protect his modesty, so it’s best to look away whenever he performs a cartwheel.

This is ‘five reel’ slot, although to be precise there are no reels. Instead, whenever you press the spin button the fifteen symbols that make up the playing screen fall down off the bottom of the screen, and fifteen new ones drop down from above to replace them.

If you do manage to secure a win, the winning symbols explode in a shower of dust, and fresh symbols fall down to replace them. This ‘cascade’ feature can trigger new wins, and each time this happens, a multiplier at the bottom of the screen advances one level, from 1x to 5x. So, your second cascade win is worth 2x, your third 3x and your fourth the maximum of 5x. Once the wins stop cascading the multiplier meter is reset back to 5x.

All symbols are Mayan-themed of course, and the lowest payout at 9x is a Mayan portrait. The max payout is for a red, wide-mouthed god at 7,500x.

You can choose your coin size from 0.02 to 1.00, and the number of coins you want in play from one to five. Your total wager is these two values multiplied by 25, as all 25 pay lines are in play at all times. Your minimum wager is therefore 0.50, and your maximum 125.00.

Rook’s Revenge Wild Symbol: The wild symbol is a golden wheel in which sits a stylised question mark. It appears on the central three reels and substitutes for all other symbols.

Here, all wins are automatically tripled, and the values on the cascade multiplier are tripled as well, so each cascade win is multiplied 3x, 6x, 9x and 15x in turn, leading to some very generous payouts if the reels land right.

This game is really made fun by the fact that triggering a win is not the end of things. Watching the reels explode and hoping for new winning combinations is a ‘reel’ treat.

Add on the bonus features and this is a very pleasant slot … it’s just a shame about Rook’s dancing!