Gonzo’s Quest tells the story of a group of Spanish explorers searching for the mythical city of El Dorado. In particular, the game focuses on Gonzo (likely based on Gonzalo Pizarro, who was one of the first Spanish explorers to attempt to find the city), who steals the map to the city of gold and finds it for himself. Will Gonzo’s discoveries help you find your own pot of gold?

Gonzo’s Quest: The Search for El Dorado is a fairly simple slot machine, with one exception: the “falling reels” feature is used in a very unique and creative way in this game. This allows Gonzo’s Quest to maintain interesting gameplay and award large prizes, even if it doesn’t feature any particularly noteworthy jackpots or complex bonus rounds. 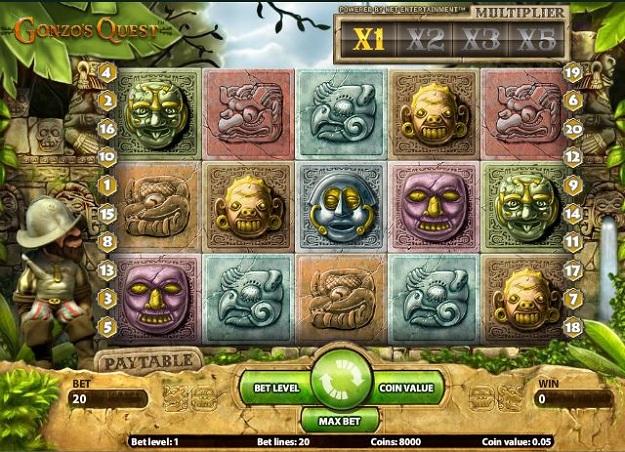 Gonzo’s Quest is a five-reel, 20-line 3D video slot machine which is available at Net Entertainment casinos. In this game, players have the ability to wager anywhere between one and five coins per line, making the maximum bet 100 coins (at a maximum of €0.50 per coin, €50 is the maximum wager).

In this game, players must match identical symbols from left to right across their active paylines in order to win prizes. Interestingly, Gonzo’s Quest is one of the few games we’ve played where it’s somewhat difficult to describe each individual symbol. This isn’t a bad thing, though; rather than use some generic symbols that would look out of place in the Central/Southern American backdrop, the game chooses to use symbolic representations of animals and masks that one might find in those areas.

Along with being stylish, these symbols are also few in number. There are only seven standard symbols in Gonzo’s Quest, each of which requires you to match at least three in order to score a win. The more animalistic masks tend to be the lower-value symbols, while human masks – many of which have golden features – will win you larger prizes.

In addition, there are two special symbols you’ll encounter on the reels. The first is the Free Fall symbol – a golden circle with a mask in the center. This symbol is important, as it activates this machine’s only real bonus round. The other special icon is the question mark, which works as a wild symbol. This symbol can substitute for any symbol in order to make winning combinations, though it does not have any prizes associated with itself.

Gonzo’s Quest has two special features – one of which is built directly into the game. Each time you make a winning combination in this game, you’ll see the symbols in that combination break apart, allowing new symbols to fall into place from above. If there are now new winning combinations, you’ll win again, and the process will repeat itself.

On its own, this is not a particularly notable feature; after all, many games have used this or similar ideas before. What makes Gonzo’s Quest so exciting is the multiplier effect that’s built into this feature. On your initial spin, each combination you make is worth the normal prize amount. However, when the next “avalanche” comes and allows new symbols to fall into place, you’ll see any new winning combinations pay out at a 2x rate. Trigger another avalanche, and your prizes will move up to 3x the normal rate. Finally, any further avalanches will trigger prizes that pay out with an incredible 5x multiplier.

This feature is also a major factor when it comes to the only bonus round you’ll find in Gonzo’s Quest. Match three “Free Fall” symbols consecutively across any active payline, and you’ll trigger the Free Fall Bonus Round. In this game, you’ll receive 10 free spins (or falls) on the reels. During these games, your winnings will be tripled.

What’s really great about this feature is that the normal “avalanche” rules still remain in place. That means that as you make winning combinations, you’ll also trigger multipliers as new symbols lock into place. If you can get to the maximum multiplier, you’ll be winning prizes worth as much as 15x their normal values – enough to make any win absolutely enormous.

Speaking of big wins, the most valuable prize in Gonzo’s Chest is the one you’ll receive if you manage to hit five of the blue and gold mask symbol on any payline. This results in a prize equal to 2,500 coins for each coin wagered on that line. Hypothetically, if you bet the maximum of €0.50 per coin, wagered five coins, and hit this combination during the Free Fall game after several avalanches, this combination can be worth as much as €93,750!