Play Ned and his Friends

Ned and his Friends Game Information

Ned is a guy that has a problem many of us have had to deal with at one time or another – an infestation of rodents. Of course, these rats aren’t your run-of-the-mill wall-dwellers; instead, these little guys have a penchant for singing for Ned and his girlfriend.

Available at most Betsoft Gaming casinos, Ned and his Friends is a fun, attractive slot machine that features numerous bonus games. It’s not the flashiest game Betsoft has ever created, and the theme is a little silly, but that doesn’t stop it from being a solid, engaging machine that most players will enjoy. 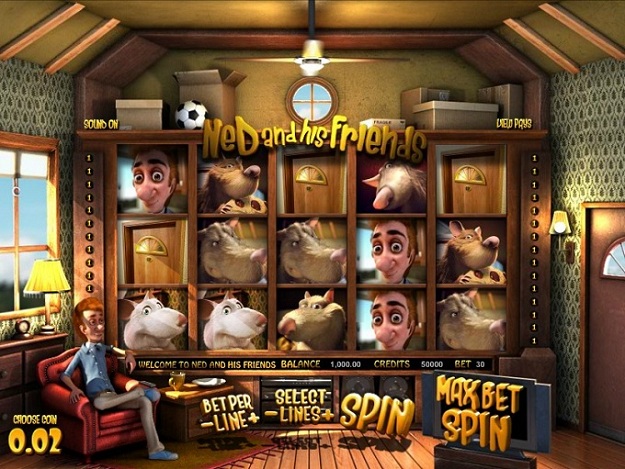 Visit www.DrakeCasino.eu to play Ned And His Friends!

Basics of Ned and his Friends

Ned and his Friends is one of the newest 3D slots released from Betsoft Gaming. It features a five-reel layout that allows players to wager on up to 30 different paylines. Each line can be bet for up to five coins, with several different denominations of coins available to choose from.

The object of the game is to match symbols consecutively across active paylines from left to right. There are a total of seven different symbols which you can try matching to win instant prizes. These symbols include the five different rats that you can find in Ned’s house, as well as Ned himself. The more symbols you match, the larger the prizes you can win. The biggest prizes come from hitting five Ned symbols on the same payline; this combination can earn you 500 credits for each coin you bet on that line.

Most of the gameplay in Ned and his Friends takes place in the title character’s living room. The reels are placed on the shelves behind Ned while he watches television, excitedly reacting whenever you win a prize. Most of the animations in the game are short and sweet, although you’ll see some extended sequences in the game’s bonus rounds.

The music in Ned and his Friends is mostly provided by “his friends” – in other words, the singing rats. The songs they sing come in a high-pitched tone that you might recognize from other famous singing rodents, and while it’s cute at first, some players might find that style just a bit annoying. Luckily, if you feel that way, it’s easy to turn off the game’s sounds and play without the musical accompaniment.

Special Features of Ned and his Friends

Along with the standard prize-winning symbols, you’ll also find a few special icons scattered around the reels that can affect gameplay in various ways. For instance, you’ll want to be on the lookout for Ned’s girlfriend; if you manage to hit three or more of these symbols anywhere during the same spin, you’ll start the “Ratty Rat Doo-Wop” bonus game.

In this game, you’ll watch as the five rats sing to Ned’s girlfriend, who has fainted after seeing them in Ned’s house. You’ll have a simple task: you get to choose any one of the five rats to sing a solo as part of their song. After the song ends, you’ll be awarded with a number of bonus credits.

Finally, hitting three or more rat tail symbols anywhere on the reels will earn you a shot at the Rat Tail “Click Me” game. This simple game requires you to choose any of the rat tail symbols to reveal an instant prize.

Final Thoughts on Ned and his Friends

Ned and his Friends is a fairly basic slot machine, at least by Betsoft standards. There are no huge jackpot payouts available, and the bonus games only require limited interaction from the player. The only area in which the game really stands out is graphically, where the animations and setting are just as sharp as you’d expect from any new Betsoft game.

Overall, though, Ned and his Friends is still quite fun to play. The bonus games are enjoyable, especially the first time you activate them, and the gimmick of the singing mice is amusing for a lot longer than you might expect. This game is just pure fun, and that’s one of the nicest things we can say about any slot machine.

If you’re interested in special frills or huge prizes, Ned and his Friends probably isn’t going to appeal to you – check out The Slotfather slots or Mamma Mia slots games instead. However, if the most important thing to you is solid slots action in a fun, lighthearted atmosphere, this game should deliver exactly what you’re looking for.

Visit www.DrakeCasino.eu to play Ned And His Friends!