Known for their expertise in creating stunning graphic-rich 3D slot machines, Betsoft Gaming have once again exceeded all expectations by delivering yet another exciting and unique game. The WhoSpunIt 3D slot machine has a unique murder-mystery theme (hence the title referencing the popular ‘Who Done It?’ phrase), features several fully animated 3D characters (five to be exact), and contains several levels of gameplay which sees you collect clues to solve the murder. 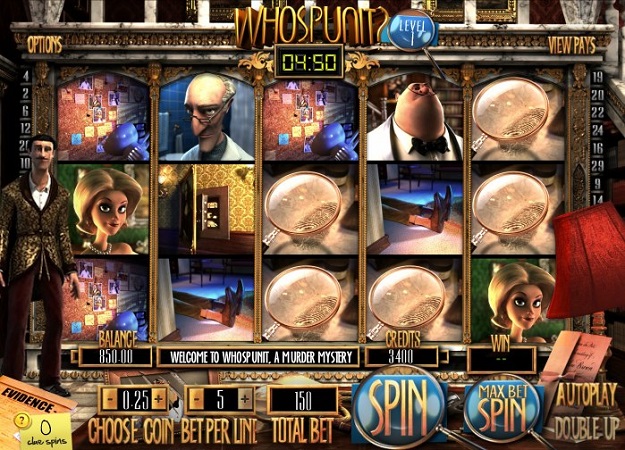 As with the majority of 3D slot machines developed by Betsoft Gaming, WhoSpunIt contains 5 reels and 30 paylines. Coin denominations range from just 0.02 to 1 and between 1 and 5 coins can be bet on each payline, meaning a potential maximum bet of 150 coins per spin. There is also a maximum payout amount of 320,500 coins available on this slot machine.

WhoSpunIt is a murder-mystery slot machine set in a luxurious mansion called Wellington Manor which sees players tasked with collecting evidence clues in order to solve who committed the murder of Mr Farmington. There are a total of five animated 3D characters in the game who are the suspects and they are: Covington the Butler, Miss Ellie the Housekeeper, Dr.Van Austren the Physician, Miss Chatham the Socialite, and Mr Wellington the host and owner of the property.

There is a wide variety of symbols used in the WhoSpunIt slot machine due to it having several clue modes which have their own specific symbols, but we will talk about those later. The symbols used in the main part of the slot include the five murder suspects (Mr Wellington, Covington, Miss Ellie, Dr.Van Austen, and Miss Chatham), a safe which is hidden behind a portrait, magnifying glass, a board on the wall with information on the murder, and the legs of the murder victim Mr Farmington (this is the highest value standard symbol and is worth 2500 credits if you land 5 on the reels).

The WhoSpunIt slot machine is unique and plays in more of a ‘game style’ than the other slots currently released. When you first begin playing WhoSpunIt you will notice a five minute timer counting down above the reels. This is when the ‘Detective Mode’ will begin and within these five minutes you must spin the reels as many times as possible to collect random ‘clue spins’ and you are also awarded your basic symbol wins while doing so.

The number of clue spins you have accumulated are stated on the bottom left of the slot machine and once the countdown timer has finished you will begin the detective mode. There are actually 3 different levels to the detective mode (location, murder weapon, and critical clue), all with different symbols, and the number of spins you have in order to solve each level depends on how many clue spins you accumulated in the base game. In order to complete each level you must accumulate five stars on one of the five options each game.

Location (Level 1): The first level is discovering the location where the murder took place. The locations include the Gazebo, Bathroom, Study Room, Dining Room and Kitchen. Accumulate five stars on one of these locations and you will then progress to level 2. (Note: Between each levels you still need to accumulate clue spins in the base game).

Murder Weapon (Level 2): Next we must discover the killers weapon of choice. This is between a Noose, Wrench, Knife, Poison, or a Gun. Once again five stars are needed for one weapon before progressing to level 3.

Critical Clue (Level 3): Now we know the location and the murder weapon we must discover the critical clue to help us choose which of the five characters committed the murder. The clues featured include a Stethoscope, Cigarette, Spilled Tea, a Watch, and a Duster. Again, land five stars on one of these clues and you will complete the level.

Solving the Murder: With all of the clues and information gathered, we know must decide ‘who done it‘. This mode is activated by landing the evidence symbol in the center of reel 3 and sees you solve the murder by an interrogating, or simply accusing, the character of your choice. You are then rewarded bonus credits for completing the game.

On top of all this there is also an exciting free spins mode featured. This is triggered in the base game by landing symbols of all five characters on the reels at any one time and sees you rewarded with 10 free spins. The most exciting aspect of this though is that you then get to choose one of the five characters, each of which has a different feature attached to them. This includes a 2x multiplier on your free spins, reels paying both ways, a 4x multiplier, 1-5 random wilds, or an expanding wild – all of which bring some lovely big wins from your free spins!