Betsoft Gaming take us underground yet again for their latest 3D slot machine release to mine for Gold and strike it rich with a big win. More Gold Diggin’ takes us deep down into a mine where we are joined by 3D characters Jeb and Cletus who are hunting for gold in order to impress the beautiful Daisy. Those of you who have enjoyed Betsoft Gaming slot machines before may remember Jeb and Cletus from Gold Diggers – of which this is a more modern sequel. As you can always expect from a Betsoft 3D slot it is packed with several exciting bonus features, incredible animated 3D graphics, and big wins up for grabs – and it’s also available on mobile! 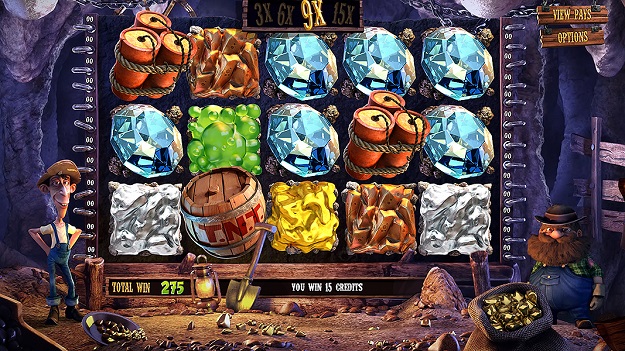 More Gold Diggin’ is a 5-reel, 25-payline slot machine, set deep in the heart of a mine with 3D characters Jeb and Cletus stood at either side of the reels. Betsoft have done an excellent job creating a mining feel with Gold, Diamond, Silver, and Oil all featured as symbols on the slot, along with a barrel of TNT, and stick of dynamite (which acts as a Wild symbol). None of the standard playing card symbols feature which actually gives more opportunity for those big wins with the TNT and dynamite appearing on the reels much more frequently.

More Gold Diggin’ can be played for up to 150 coins and there is a massive maximum win worth 2,330,000 coins on offer – which actually seems achievable once you start hitting those big multipliers! As with all Betsoft Gaming slot machines they excel with their bonus features, and More Gold Diggin’ includes the following:

Free Spins – When you land three of the TNT barrel symbols on reels 1, 2 and 3 you will activate the free spins feature. Your free spins will earn you a 3x multiplier on all wins, however that can rise to 15x thanks to the cascading reels and additional free spins can be triggered while in this mode which result in some very handsome wins (in fact we managed to get 23 free spins in total when reviewing More Gold Diggin’).

Double Up Game – The double up bonus feature in More Gold Diggin’ features the third 3D character of the game – Daisy. In this game she deals five cards then selects one of them and you then must select a card of a higher value – somewhat similar to the Paco and the Popping Peppers slot bonus feature. If you manage to pick a card with a higher value than hers you will double your winnings.

More Gold Diggin’ is a welcome addition to the incredible Slots3 range of games created by Betsoft Gaming. It highlights just how much Betsoft have advanced in just a few years since Gold Diggers was first released, with this latest edition showcasing far superior graphics. The cascading reels feature is excellent and allows for some very large wins, as does the free spins feature, however we are a little disappointed there is no second screen bonus feature or click me game which we have become so familiar with in Betsoft slots. The rewards on offer are already generous enough though, so we won’t get too greedy!