When you hear the title Gold Diggers, chances are that the first thing that comes to mind is the Kanye West song, or the stereotypical women the song is about. The Gold Diggers slot machine takes a more literal take on the term though, as it follows a couple of intrepid gold miners down into the Earth as they search for riches.

Okay, so there might be one of the more modern gold diggers in the game. But for the most part, the focus is on helping those miners find their riches – all while taking a little piece of the pie for yourself. 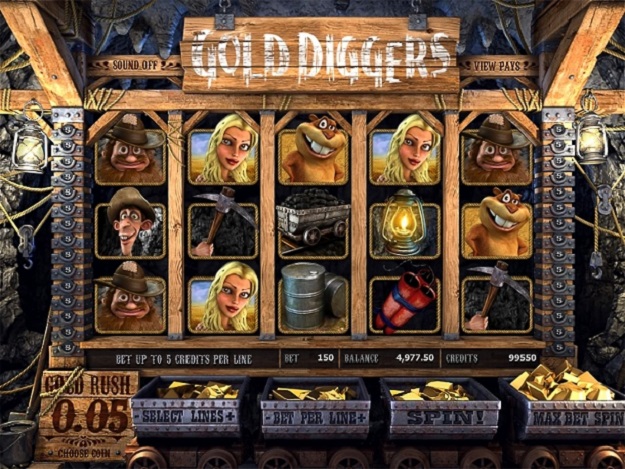 Gold Diggers conforms to the same general structure of most Betsoft 3D slot games. It’s a 30-line, five-reel slot machine that can be played for up to $1 per coin, and up to five coins per line.

The game explores the world of gold mining in the hills of the American west. You’ll be following two naive prospectors as they search for gold – along with one young woman who seems more interested in the gold than the miners themselves. The game’s theme is accentuated by lots of little touches: animations play when you score a win, the trucks of gold shake each time you spin the wheel, and the cave walls drip around you while you play.

As usual, the object of the game is to match as many of the same symbol as possible running from left to right on any active payline. The amount you stand to win will vary depending on the symbols you hit. You can win a small amount by matching pans of gold or pickaxes, while mining trucks and barrels of oil (also known as black gold) could earn you a little more.

But the biggest wins are made by hitting the three main characters in the game. You’ll score a big win by finding the female “gold digger”, while the biggest prizes are reserved for the gold miners themselves. You can win as much as 500 credits per coin wagered by hitting five of the bearded miner – that’s as much as $2,500 if you’re playing for the maximum bet possible.

There are three different bonus features in Gold Diggers, each of which can earn you some bonus cash during gameplay. The first is triggered when you hit three or more dynamite symbols as a winning combination on an active payline. Alone, these dynamite symbols are a reasonably big win, paying out as much as 200 credits per coin if you hit five of them. But any time you hit three or more dynamite symbols, you’ll be treated to an additional bonus. After you’re credited with your wins, the dynamite will explode, allowing new symbols to fall onto the reels. The new screen will then pay out again if there are any new (or remaining) winning combinations on the screen.

Another fun little slots bonus game is the Gopher a Dig feature. If you hit three or more gopher symbols on a payline, you’ll trigger a “click me” game in which you’ll choose between one of the on-screen gophers. Your chosen gopher will dig down to expose hidden credits that will instantly be added to your winnings.

Finally, the most lucrative special feature is the Gold Rush Bonus Game. This game is triggered any time you hit three or more gold rush notice symbols anywhere on the reels. This game transports you to a second screen, where our three main characters are standing in a newly exposed area of the gold mine. You’ll have a choice between six different areas to mine, of which you’ll get to choose three. As you mine each area, you’ll reveal gold, along with a varying amount of credits. At the end of the game, the credits you’ve revealed are totaled up and awarded to you. This feature can be very lucrative; the first time we triggered this bonus, we walked away with about 2,000 credits in winnings.

Gold Diggers is not the most visually impressive game in the Betsoft lineup, but that shouldn’t dissuade you from giving it a try. The bonus games often reward you with very large prizes, and the overall mood of the game is humorous and fun.

In a lot of ways, Gold Diggers comes across as a good example of what 3D slot games are all about. It falls somewhere in the middle in terms of the number of bonus features it has, as well as the amount of animation and special effects used during play. If you’re looking for a Betsoft slot that offers a little extra flair and fun without getting drowned in special features and animations, Gold Diggers might just be your opportunity to strike it rich.