There’s big money in oil – especially with the way gasoline prices are these days. But even decades ago, oil was seen as one of the quickest gateways into the world of riches, which makes the fuel that runs the world a perfect theme for a new slot machine. In Black Gold, one of the latest games by Betsoft, you’ll have the opportunity to win huge prizes while exploring an oil field that looks to be straight out of Texas. With fun bonus games and the same great graphics you can always expect from Betsoft slots, Black Gold is definitely a game that will appeal to aspiring oil barons everywhere. 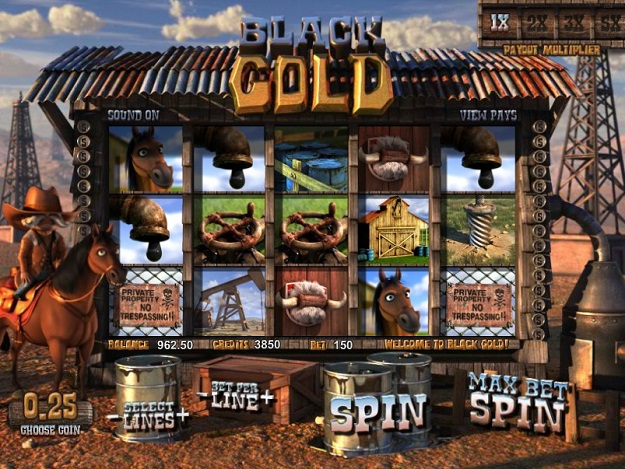 Black Gold is a five-reel, 30 payline slot machine that was designed by Betsoft as a part of their 3D line of slot machines. Players can play at a number of different coin denominations, and may wager up to five coins on each line. In the game, players must match identical symbols from left to right across their active paylines, with three or more of the same symbol necessary in order to trigger a win. Symbols include horses, oil barons, and pieces of equipment you might find around an oil field.

One thing you won’t see in Black Gold are some of the more common special symbols associated with modern online slots. For instance, there’s no wild symbol, and there’s no scatter symbol that automatically triggers a win. However, there are several special symbols that can trigger bonus games.

There’s no shortage of ways to get into bonus features in Black Gold. First, if you should happen to hit three or more barn symbols anywhere on the reels on any spin, you’ll instantly trigger the Nighttime Free Spins Mode. In this game, you’ll win a number of free spins, each of which comes with a few nice bonuses that make the spins more lucrative. The barn symbol will now become a wild multiplier symbol, increasing the value of each winning combination you make. The more times you hit the barn symbol as a part of a win, the higher the multiplier will get, up to a maximum of 10x.

Next up is the Drilling for Oil Click Me game. This special feature is activated if you should receive three or more drill symbols during any spin. When this occurs, you’ll be asked to pick between all of the oil symbols on the screen. Doing so will reveal an instant prize of credits.

Like most Betsoft 3D slots games, Black Gold also contains a second screen bonus round – this time known as the Higher or Lower Round (the same bonus game found in the Paco and the Popping Peppers slot machine). You’ll gain access to this game if you manage to find three oil pump symbols on the screen on any spin. When this occurs, you’ll be taken to an oil derrick that has a large number on the side. You’ll then be asked to make a simple guess: will the next number be higher or lower than the one shown? Each time you make a correct guess, you’ll increase your potential winnings. This game continues until you’ve guessed correctly or incorrectly four times, after which you’ll find out how much you’ve won.

Finally, there’s a special feature that is triggered each time you win during a normal spin. After each win, you’ll watch the center reel respin, giving you a free chance at winning another prize. In addition, the payout multiplier bar will rise up a level each time you trigger a respin. This will continue until you lose on a spin, up to a maximum multiplier of 5x. Once you lose, the multiplier will reset to 1x, and you’ll need to start a new spin.

While there are no progressive jackpots in Black Gold, and most of your largest wins will likely come courtesy of the game’s special features, there are a few prizes worth noting on the reels. The most valuable symbol is the oil baron himself, which is worth 400 credits for each coin you’ve wagered – up to a maximum of 2,000 credits if you wager the full five coins per line.

Theme and Presentation in Black Gold

As in all of the Betsoft 3D Slots, presentation is definitely at the forefront of Black Gold. The game clearly uses the oil field theme for all its worth, with many of the symbols, backgrounds, and animations supporting the theme. The special features fit right into the game as well, and the whole thing is tied together with the state of the art animated effects that you’ll see throughout the game as you play.

But what’s really great here is that this game doesn’t take itself too seriously. There’s goofy music, a wide-eyed horse, and a Texas oil baron with a hat and moustache that are both way too big for his face. In other words, Black Gold is all about creating a fun atmosphere and having a good time in order to suck you right into the game’s world. Oil may be a serious business, but this game takes that theme and finds a lighter side.