Cavemen aren’t exactly known for accumulating vast stores of wealth. That might seem to make them a bad subject for a slot machine game. Then again, the untamed wild of the past does have its own sorts of riches: precious stones, stores of gold, and now-extinct animals that might spring up to attack you at any moment.

2 Million B.C. brings the world of the cavemen to life, complete with Stone Age technology, rustic campfires and many other things we associate with the early days of humanity. If you’ve ever thought you might have fun romping through a prehistoric world, you will love this slot! 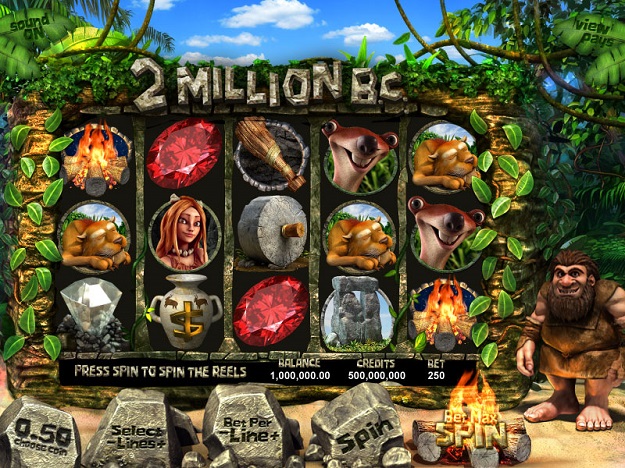 2 Million B.C. is a five-reel, 30-line slot that’s part of Betsoft Gaming’s 3D slots line, and features the same colorful graphics and animations that can be found in all of the games in this series. This time, of course, the theme is the distant past, when men roamed the land along with wooly mammoths, saber tooth tigers and other fantastic beasts. Players can play up to five coins on each line, with coin denominations as high as $1 available to players.

As in most online slots, players must try to match symbols on active paylines. Depending on the symbol, players may have to match either two or three symbols consecutively from left to right in order to win a prize. Of course, the more symbols you match, the more you can win, with five-of-a-kinds earning the biggest prizes. Small value symbols like rubies and animal carvings may earn as much as 100 credits per coin, while you can earn bigger wins for clubs, wheels and tigers. The most valuable symbol — the cave girl — is worth up to 500 credits for each coin wagered if you can manage to find her on all five reels. That means that you can win as much as $2,500 on a single payline! Each time you win during play, you’ll trigger a short animation, though these are somewhat understated compared to the animations seen in other games in the Betsoft collection.

While there are plenty of ways to win during this game, you won’t find many special symbols on the reels in this game. There are no wild or scatter symbols, though there are a few special features that are hidden on the reels.

There are three different special features that can be triggered during play in 2 Million B.C. by hitting the correct combinations of symbols. The first is a pretty standard free spins game, which is triggered by hitting three or more campfire symbols. This suddenly brings the game into a night mode, where the caveman on screen sits by a roaring fire. You’ll earn a variable number of free spins, and while there are no special bonuses during these free spins, it is possible to retrigger additional free spins during the bonus round.

Next up is the Saber Attacks game, in which you’ll help the caveman fight off a vicious saber tooth tiger. This game is triggered when three acorn symbols appear anywhere on the reels. In this bonus game, you’ll help the caveman aim and fire at the tiger; once he’s knocked out the animal, you’ll collect an instant reward of bonus credits.

Finally, there’s the Diamond Bonus Round. This game is triggered when you hit a winning combination of three or more diamonds on an active payline. In addition to winning a prize of up to 200 credits per coin bet, you’ll also activate a bonus round in which the caveman will attempt to steal a diamond from our old friend, the saber tooth tiger. Once you’ve chosen a method for stealing the diamond, you’ll see the caveman carry out your plan, and earn a reward after the animated scene plays out.

As Betsoft 3D slot machines go, 2 Million B.C. offers fairly standard and straightforward gameplay. The bonus features are pretty low key, while still offering some impressive payouts when you hit them. The theme is cute and colorful, but doesn’t have the same “wow factor” or deep immersion that some other games in the lineup.

This means that 2 Million B.C. is for the type of player who wants to enjoy the great graphics, animations and sound found in 3D Betsoft slots, while still enjoying the kind of gameplay found in more traditional slots. If you’re looking for tons of bells and whistles, this game isn’t for you. But if a mix of modern style with classic gameplay is more your speed, 2 Million B.C. is a great blast from the past that will satisfy your cravings for slots action.