Play It Came From Venus

It Came From Venus Game Information

It Came From Venus is a 5-reel 30-pay line slot from the slots experts at Betsoft. The alien critter featured in this game may have originated from Venus, but judging by the looks of it, it stopped off along the way to sneak a cameo appearance in the film ‘Little Shop of Horrors’.

Anyhow, the monster has now turned up on some Hill-Billy farm in the deep south, and is preparing it seems to make a meal of things… or at least a meal of the farmer and a few of his chickens, perhaps. Both the farmer and the alien plant stand and watch as the action unfolds, and Mr Plant gives off an occasional guttural laugh, which is very disconcerting, to say the least. 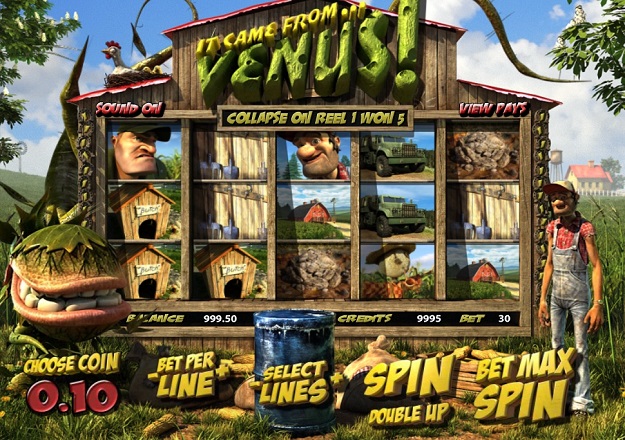 Visit www.DrakeCasino.eu to play It Came From Venus!

It Came From Venus Gameplay & Symbols

The symbols in this game are all aspects of farming life, from barns to scarecrows, plus the farmer, the alien plant, and an army major who’s more than likely on the look-out for our green-fingered (and toed, and bodied, and headed) friend. To win a jackpot, you have to land at least three identical symbols in sequence from the left hand reel on one of your active pay lines.

The lowest pay-outs are the tool shed, barn and dog’s house, all of which pay 5x your bet-per-line. The jackpot is paid out at 500x for five of our alien plant visitor, plus if you play with maximum bet, you win the game’s fantastic progressive jackpot.

You can choose your coin size from 0.02 to 1.00, and your bet-per-line from one to five. You can also choose how many lines you want into play from 1 to 30. Your final wager is your coin size multiplied by your bet-per-line multiplied by the number of lines you want in play. This makes the lowest bet possible 0.02, and the maximum 150. The more you bet, the bigger the prizes and of course you have to bet the max if you want win the progressive jackpot.

It Came From Venus Bonus Features

Scatter Symbol: The scatter symbol is in the form of a ‘Do Not Trespass’ sign, and landing at least three scatter symbols anywhere across the reels pays a cash prize.

Feed Me Free Spins: During game-play food sacks will appear on the centre reel and when they do, they are eaten by our Venusian visitor. Once he’s had his fill of five sacks, you’re through to the free spins round. During free spins the food sack symbol becomes a ‘sticky wild’ and sticks in place as a wild symbol until the free spins round is over.

Stacked Collapsing Wins: Some symbols on reels one, three and five are stacked three-high. If you land two reels containing three identical symbols, you win 2x your current game bet. Land all three and you win 4x your current wager.

Double Up Feature: You can play ‘double-or-quits’ on any win in this game. Hit the ‘double up’ button to be taken through to a screen where the farmer tosses an apple to the plant. You can bet on whether the plant will catch or miss the ball. You can keep doubling up to five times in succession.

Save The Plant Bonus Round: If you land three or more helicopter symbols anywhere on the reels then you can play the bonus round game. The military have captured the plant, and it’s up to the farmer to save him. Choose one of boxes to see if you can free the plant and earn a cash bonus.

It Came From Venus Conclusion

It Came From Venus really has it all… great graphics, cool game-play, free spins, multipliers, wilds, scatter, bonus games and even a progressive cash jackpot.

It’s very easy to see why this very original game has become such a firm slots favourite. Why not give it a few spins for a truly out-of-this-world slots experience

Visit www.DrakeCasino.eu to play It Came From Venus!