Ah, the life of a Viking: pillaging, going to war, drinking, sailing around in those dragon boats – sounds like fun, doesn’t it? Okay, so actual Vikings probably had a little more to deal with in their lives than the glamorous stuff we think of when they come to mind, but why worry about details?

In Viking Age, a 3D slot machine by Betsoft, you’ll be able to enjoy all of the classic, stereotypical Viking activities on your way to winning your own horde of cash. The combination of fun graphics and sound and huge prizes available on the reels makes Viking Age a truly fun and unique slot machine experience. 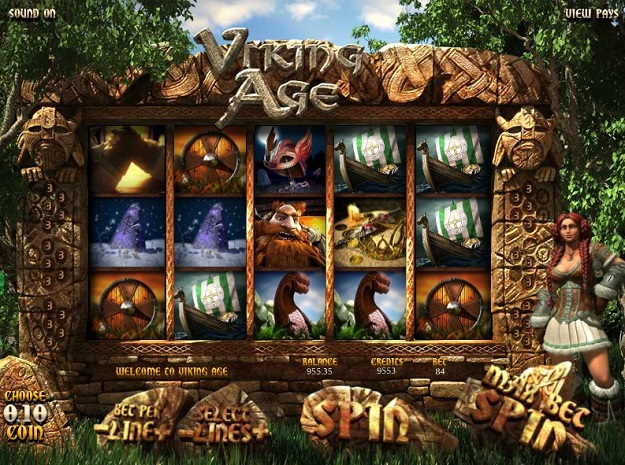 Viking Age is a five-reel, 30-line 3D slot machine by Betsoft, and is available at most casinos running their software. The game can be played for up to five coins per line, with each coin being worth anywhere between $0.02 and $1.

As with most slot machines, the goal is to match symbols from left to right across the active paylines. Interestingly, the majority of symbols in Viking Age will win at least a small prize even if you only manage to match two of them. The lower value symbols, like an ancient rune or a shield, require three symbols to trigger a win. However, the higher-value symbols like the Vikings themselves, their warships, and the axe only need two in a row to win. The biggest prize comes from the blond Viking warrior, who can earn you up to $1,500 if you match five of him while playing for the maximum number of coins! Each win comes with a unique animation as an extra reward for your efforts.

As with many of the Betsoft slots, the basic gameplay options for Viking Age is simple. You don’t have to worry about wild symbols or gimmicks; just try to match the symbols, and know that the more you match, the bigger the prizes you’ll be given.

But not everything about Viking Age is quite so simple. There are three different special symbols that are hidden on the reels, each of which has the potential to trigger a special feature bonus round.

The first is the Viking helmet. If you manage to hit three or more of these helmets during a single spin, you’ll activate the Rune Stone bonus round. You’ll zoom in close on the action and help Viking woman Amma pick one of several mystical symbols that appear on the stones surrounding the play area. Once you’ve made your choice, you’ll be rewarded with one of several possibilities. You could earn an instant bonus, or earn a number of free spins. Alternately, this game will sometimes instantly take you to one of the other bonus games, allowing you to win even bigger!

The second bonus game is triggered if you hit three different Amma symbols, and is known as the Multiplier Free Spins feature. In this game, you’ll win a number of free spins. However, there will also be two additional reels on the left and right of the normal reels. These reels feature multiplier symbols that range from 2x to 5x. If you win on a payline, and the multiplier symbols to the left of the first reel and the right of the final reel symbols match, you’ll see your winnings for that payline multiplied by that amount.

Perhaps the most exciting slots bonus round in Viking Age is the Arm Wrestling challenge, in which two Viking decide to pit themselves against each other in a contest of strength. This game is triggered when you hit three or more of the arm wrestling icons. Once you’re in this game, all you need to do is select which Viking you believe will win the contest, then sit back and watch! You’ll win credits as the competition goes on, and you’ll win even more if your Viking proves to be the victor.

We had a lot of fun playing and testing the Viking Age slot machine. While all of the Betsoft 3D slots do their best to really explore the themes they’re based around, some do a better job of this than others, and Viking Age is definitely one of the best in this regard. Not only do the game’s aesthetics really bring out the Viking feel, but the symbols, animations and bonus games also fit right in with the theme.

As for the game itself, there’s a good variety of payouts available, and we found that wins were pretty frequent, which helps prevent the game from becoming boring. The bonus features trigger fairly often as well, which adds constant excitement and variety to the machine.

Overall, Viking Age is one of the better 3D slots in the Betsoft lineup. If you’ve enjoyed other 3D slots, or if you’ve never played one before and are looking for a place to jump in, we highly recommend Viking Age.