Megasaur is one of the most exciting slots to be released by Realtime Gaming for quite some time, and is their equivalent for USA players to Microgaming’s Jurassic Park slot which was released just before it. Megasaur takes you deep into the jungle where you are surrounded by Dinosaurs, as well as opportunities to win big. There are several rewarding bonus features built into Megasaur, however none are as thrilling as the chance to win it’s progressive jackpot, which was close to the $1 million mark when we were reviewing the slot.

Of course this isn’t the first Dinosaur themed slot to be produced by RTG, their T-Rex slot proved to be very popular amongst players too, but with such a huge jackpot on offer we anticipate Megasaur to surpass it’s popularity and be one of RTG’s most played games for some time! 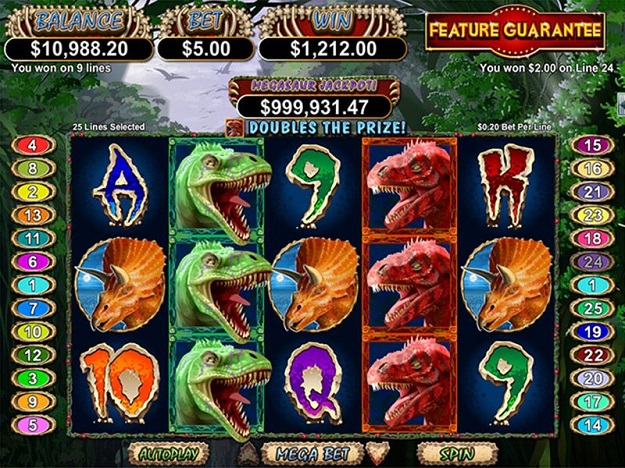 Like most slots from RTG, Megasaur contains a total of 5 reels and 25 paylines. The betting options are all preset with three amounts available to choose from – either $1.25 ($0.05 per line), $2.50 ($0.10 per line), or $5 ($0.20 per line). This won’t suit players who like to play high limit slots but for a maximum bet of $5 to be in with a chance of winning the progressive jackpot currently worth just under $1 million sounds pretty good to us!

Megasaur is set in the heart of the jungle and the dramatic background music accompanies the ferocious Dinosaur symbols on the reels perfectly to fit the theme, though the symbols and layout do seem very similar to the T-Rex slot. The symbols you will be greeted with include both a Red and Green Megasaur (both of which act as Wilds), four other ferocious Dinosaurs, a Volcano (the games Scatter), and the Ace to 10 playing card symbols which are also designed in a very gruesome style.

Megasaur Wilds – When you land a Green Megasaur Wild symbol on reel 2 it substitutes for all symbols except for the Red Megasaur and Volcano symbols, eating any other Dinosaurs on the reel and replacing them too. When you get a Red Megasaur on reel 4 it once again substitutes for all symbols except the Green Megasaur and Volcano symbols, and it too replaces other Dinosaur symbols on the reel to become Wild. The only difference being that wins are doubled when the Red Megasaur is part of the combination.

Free Spins – The free spins mode in Megasaur is activated by landing three or more Scatter symbols (the Volcano) on the reels in one spin. You then get to click on each Scatter to reveal a number of free spins (either 2, 5 or 10) and these are added together to give your total number of spins. You are guaranteed at least 6 free spins, with the maximum being 50 should you land five Volcano symbols and be lucky enough to get 10 free spins behind each symbol!

Feature Guarantee – Worried about playing spin after spin only to be left frustrated at being unable to trigger the bonus feature? Have no worries, RTG have incorporated a ‘feature guarantee’ which activates the bonus feature for you after 250 spins should you fail to do so manually.

Progressive Jackpot – The life-changing progressive jackpot in Megasaur can only be won by landing five Volcano symbols during free spins mode while playing for the maximum $5 per spin. There are other opportunities to win should you fall short of the ‘Mega’ jackpot. If you are playing for $2.50 per spin and land 4 or more Volcano symbols you will be rewarded with 20% of the jackpot total, while 3 or more Volcano symbols while playing for $1.25 per spin will see you land 10% of the jackpot. At the time of this review the Megasaur jackpot is worth $999,931 so you would be crazy not to try a few $5 spins on this game!