Even if you’re not a fan of Lord of the Rings, you’re certainly familiar with one of the great fantasy rivalries that was inspired by the series of novels: the battle between elves and orcs. Throughout works of fantasy today, you’ll find instances of elves – wise, ancient, and nimble – battling the brutish, powerful, and ugly orcs.

It’s a great and instantly recognizable theme, which is likely why Realtime Gaming made it the subject of their first ever 3D slot machine. In Orc vs. Elf, you’ll get to take the part of a hero on either side of this timeless battle, going on incredible journeys through a 3D landscape and raking in the rewards that are found on those quests. 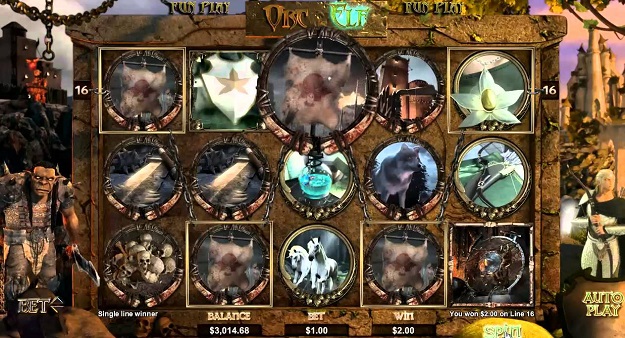 Orc vs. Elf is a five-reel, 25-line slot machine that can be found at most RTG-powered casino sites. It’s important to note that on this particular game, you won’t need to select the number of lines you play: as in “all play” slot machines, one flat fee gains you access to all of the paylines available.

As in most slots, the object is to match symbols running from left to right across the reels on your paylines. The symbols are generally staples of the fantasy genre, from gleaming castles and unicorns to mysterious caves and piles of skulls. Both the orc (which appears on the first reel) and the elf (which can only be found on the 5th reel) act as expanding wilds, filling the entire reel in order to help make winning combinations. However, it’s important to remember that these characters can not substitute for the other character’s shield – so an orc won’t act as a third elf shield, for instance.

Orc vs. Elf really uses the 3D graphics to add atmosphere and excitement to the game. During play, you’ll see fantastic animated battles between characters, animated cut scenes, and symbols that seem to jump off the screen. This may be RTG’s first 3D slot machine, but it easily matches up to the top 3D slots offered by other online slots manufacturers.

When the game begins, you’ll have to make a critical choice: do you want to be an elf or an orc? This decision has some consequences in the game, as the journey you go on will depend on which where exactly your loyalties lie. If you hit three or more of the appropriate shield for your character, you’ll be able to enter a trail that can take you to higher and higher rewards. Each time you trigger the feature, you’ll have the option of taking the next stop on the trail, or continuing normal gameplay in the hope of unlocking the next stop on the path.

First, let’s look at the orc’s feature path: the Trail to Orcholme. Trigger the feature once, and you’ll have the chance to play The Goblin’s Gold, a game in which you get five free spins and all “darkling” symbols pay double their normal amounts. If you choose to pass up that game, you can try to trigger the feature again and again to move up to higher levels, each of which improves the original bonus game. The features come in the following order:

On the other hand, if you’re playing the elf, you’ll travel down the Road to Elveros. The order of features on this path are as follows:

Regardless of which side you take, you can also unlock the Battle Bonus Round if you hit three battle bonus symbols on the reels in any spin. If your character wins, you’ll get to play the first level game from the bonus path appropriate to your character; if you lose, you’ll be given a consolation prize worth up to ten times your spin bet. If your character is the first to win three such battles, you’ll win an additional bonus!

Orc vs. Elf is a whole lot of fun to play, especially if you love the fantasy genre. This slot machine is destined to become a classic, and will hopefully encourage RTG to make more 3D games with as much atmosphere and excitement in the future. If you’d like to see why Orc vs. Elf is getting such great reviews, give it a try at your favorite RTG casino today!