When Jurassic Park was released to theaters in 1993, audiences marveled as what were then state-of-the-art special effects. Those CGI dinosaurs still hold up fairly well today, a testament to the work that was put into the film. The film (based on a Michael Crichton book of the same name) spawned a franchise that continues to this day, in the form of new films, video games, and tons of merchandise. There’s also the brand new Jurassic Park slot machine, which brings the same high-intensity dinosaur action to your computer. 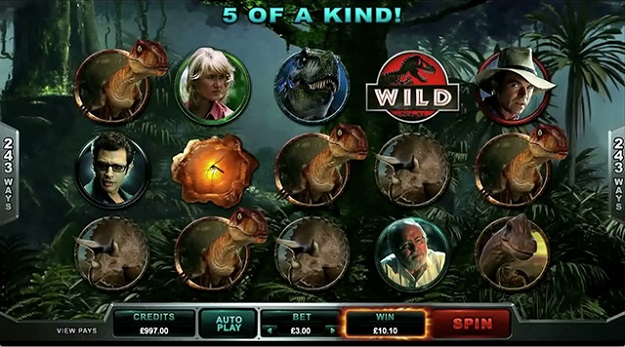 Jurassic Park is an online slot machine that can be played at most Microgaming-powered casinos. This is a five-reel machine that uses the 243 Ways style of gameplay. That means that you won’t have to worry about individual paylines; instead, every possible combination of symbols running from left to right across the reels can count as a win, giving you the equivalent of 243 lines to play on.

The object of the game is to match symbols from left to right across the reels. The symbols in this game will be familiar and iconic to anyone who has seen the Jurassic Park movies. Both human characters and dinosaurs alike are on the reels, and they can all win you prizes. Each win is accompanied by video clips from the movie, with special scenes reserved for particularly big wins.

The Jurassic Park logo acts as the wild symbol for this game. It substitutes for all symbols except for the mosquito in amber, which is the scatter symbol. The logo can also earn its own prizes if you match three or more in a row. As an added bonus, these wilds are stacked on the reels, meaning you’ll have a decent chance of covering an entire reel with wilds at the same time.

T-Rex Alert: This randomly triggered feature can occur at any time, and automatically adds an additional 35 wild symbols to the reels, greatly increasing your chances of winning on each spin. The T-Rex Alert lasts for six spins, with the bonus wilds staying on the reels throughout the feature.

Free Spins: If you can hit three or more of the mosquito symbols anywhere on the reels, you’ll instantly trigger a free spins game. There are several different possible features that this can unlock, each of which is tied to a different dinosaur. At first, these features will be chosen randomly; however, after 25 free spins games have been unlocked, you’ll then have the option of choosing whatever feature you like best each time.

The free spins features include:

Tyrannosaurus Rex: This game offers you 12 free spins. There are no multipliers or bonus symbols, but the T-Rex might show up at any time to turn a random number of reels completely wild – sometimes even all five at the same time! Each of these games also comes with stacked versions of the featured dinosaur symbol, which gives you a better chance of matching them on multiple lines.

Velociraptor: This version of the free spins game also awards you with 12 free spins. This time, however, wild symbols will split into two, increasing the size of your winning combinations. This even makes it possible to score six-of-a-kind wins, which pay out twice as much as the normal five-in-a-row prizes. There are also multiplier wilds on the reels that can pay as much as 6x the normal winnings.

Triceratops: Your 12 free spins will now feature running wilds, in which any wild symbol that covers part of a reel will be nudged to make an entire stack cover the whole reel instead. These wilds will become more and more common as your spins go on, making big wins all the more likely.

Brachiosaurus: Your 12 free spins will feature a mystery multiplier on some spins. This multiplier can be anywhere from 2x to 6x, and applies to all winning on the affected spins.

Dilophosaurus: This spitting dinosaur will show up at random during your 12 free spins, turning random positions on the reels wild. Those positions will then be locked for the remainder of the feature, giving you plenty of chances to score big wins.