Have you ever wondered what would happen if you combined the sport of basketball with bulls and other animals? The answer is probably no. But nonetheless, that’s the theme for Realtime Gaming’s Basketbull slot machine. This fun game features a number of classic slots features, including special symbols, bonus games, and random jackpots. That, combined with the clever theme, is enough to make this game a thoroughly enjoyable experience. 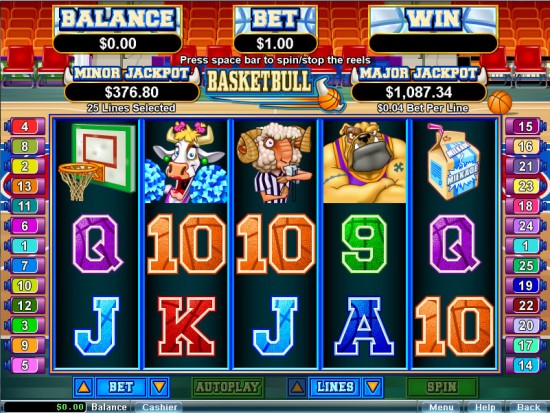 Basketbull is a five-reel, 25-line slot machine that can be found at most RTG casinos. In this game, players do not have to worry about betting a certain number of coins per line; instead, you’ll have the option of wagering anywhere between $0.01 and $5 per line as one flat bet.

This is a pretty standard slot machine, so it should come as no surprise that the object of the game is to match like symbols from left to right across your active paylines. There are a total of ten regular symbols that will earn you immediate prizes by making matches. The smallest prizes come from matching the classic card rank symbols, like jacks, queens and kings. Bigger prizes can be earned by matching backboards and milk cartons. All of these symbols require at least three-of-a-kind in order to trigger a win.

For the truly large prizes, you’ll want to match some of the game’s animal characters. There’s a ram referee, a bulldog player, and a cow cheerleader, each of which can earn you big rewards. All of these symbols also earn you at least a small prize even if you match just two of them on the same payline.

In addition to these prize-winning symbols, there are also a couple of special icons that have other effects. The titular basketbull himself makes an appearance as a substitute or wild symbol; he can combine with any of the other symbols above to make winning combinations, or create wins all by himself. There’s also a basketball symbol that acts as a scatter; match two or more of these anywhere on the screen, and you’ll win a prize.

Like many of the RTG slot games, this game is classified as a “medium volatility” machine, meaning that it has a fairly good balance between allowing you to win big prizes and rewarding you with wins on a consistent basis.

There’s one major special feature present in the Basketbull slot machine; the Free Throw Bonus Round. This game is triggered whenever you land three or more basketball scatter symbols anywhere on the reels.

When this bonus game begins, you’ll immediately be rewarded with three free spins. However, the basketbull will attempt to help you out by sinking free throws, each of which will double the number of free spins you’re rewarded. He’ll have one chance to hit a shot for each scatter symbol you hit on the screen — up to five shots in total. If the bull can hit five free throws, that means you can win up to 96 free spins! Best of all, all of your free spins are played at a 3x multiplier, and you can retrigger the Free Throw game during your free spins.

This special feature also contains a little twist known as the Win-Win feature. If you’ve played all 25 lines on the spin that triggered the Free Throw game, you’ll be eligible for the Win-Win bonus, which kicks in if your winnings from your free spins are rather small. If you win ten times your total wager or less during the bonus round, the Win-Win feature will give you a secondary reward to make up for it. The less you win, the bigger the Win-Win prize gets, growing to an amazing 100x your initial bet if you win nothing at all during your free spins.

Presentation and Theme in Basketbull

At the beginning of this review, we poked a little fun at the bulls meet basketball theme of Basketbull, but that’s only because it really is a little silly. Still, RTG had fun with this theme, and made sure that the game captured the humor of this absurd premise. All of the characters in the game are animals you’d see on the farm (except for the bulldog – but how could they resist the bull pun?), and the graphics are all colorful and childish, similar to those you might find on a Saturday morning cartoon. As long as you don’t take the theme too seriously, it’s cute and playful, and there’s nothing wrong with that, but if you want a more realistic slot machine check out our 3D slots guide.

There are two major payouts we’d like to mention that can be hit during this game. First, hitting five of the wild symbols on the same payline pays out an incredible 10,000 credits; if you bet the full $5 per line, that means this prize would be worth $50,000.

In addition, there are a couple of random progressive jackpots that can be awarded at the end of any spin, regardless of whether or not that spin was a winner. While these two jackpots aren’t huge, they still make for a nice surprise bonus during the game; the Minor Jackpot is usually worth at least a few hundred dollars, while you might win a couple thousand dollars by hitting the Major Jackpot.