Most of us have never run into a coyote in the wild; if you’re familiar with them, it’s most likely thanks to those old Roadrunner cartoons, in which Wily E. Coyote would fail again and again to catch his avian nemesis. But you don’t need to know much about coyotes in order to play Coyote Cash, a Realtime Gaming slot machine that features its own cartoonish coyote who’s up to no good. With some big prizes and a fairly large progressive jackpot, Coyote Cash is a fun machine with a light and enjoyable atmosphere. 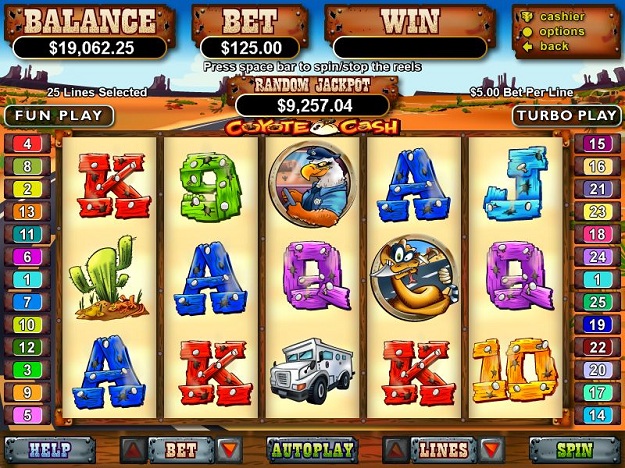 Coyote Cash is a five-reel, 25-line slot machine that can be found as part of the Real Series at most Real Time Gaming casinos. As usual in these games, players have the choice to bet up to $5 per line, meaning you can wager anywhere between $0.01 and $125 each time you spin the reels. RTG rates this game as a medium volatility machine, meaning that you can expect about an average number of streaks and big prizes during play, without any particularly long dry spells.

If you want to win some of the coyote’s cash, you’re going to need to match identical symbols consecutively across your active paylines moving from left to right. Of course, like any good RTG slot, Coyote Cash uses the poker rank symbols as its basic, low-value winning icons. If you match three nines, aces, or anything in between, you’ll win a modest prize.

The bigger prizes come into play when you hit two or more of one of this game’s more unique symbols. Along with southwestern favorites like cattle skulls and cacti, you can also win by matching trucks, snakes, or that American classic, the eagle (who seems to have developed the uncanny ability to drive a truck).

There are two special symbols to keep an eye on during play as well. The coyote is a wild substitute symbol that can not only complete any other winning combination, but also doubles your win when it does so. There’s also a scatter symbol – a bag of loot – that will win you prizes any time you hit two or more of them anywhere on the screen.

Coyote Cash is another example of an RTG game that is relatively light on special features. The main bonus game is triggered when you hit three or more “loot” scatter symbols on the same spin. When this occurs, you’ll earn 20 free spins. In addition, all of these spins will come with a multiplier: if you hit three loot symbols, you’ll have a 2x multiplier, while four loot bags earn you 3x, and five loot bags will maximize your winnings at 4x. During your free spins, you can also retrigger additional free spins, all of which will be played with the same number of lines and the same stakes as the initial spin that triggered the bonus.

We should also mention that Coyote Cash is a progressive slot. This jackpot is awarded randomly, meaning that you can win it at the end of any spin, whether or not that spin resulted in a win. Of course, the more you wager, the better your odds of triggering the jackpot. This is a feature shared with many other RTG slot machines; however, we’ve notice that the Coyote Cash jackpot tends to grow a little bit larger than some of the other Real Series jackpots; at the time of this writing, the machine we were playing on had a jackpot of over $8,000.

The largest prizes available in Coyote Cash belong to the wild symbol – the Coyote – as well as the most valuable “normal” symbol, the eagle. If you hit five eagles, you’ll win 5,000 credits; however, if you manage to have a coyote as part of that winning combination, you’ll double your winnings to 10,000 credits. You can win this same large prize if you manage to hit five wild coyotes on a single payline. In either case, this can result in a win of as much as $50,000.

One thing you’ll notice right away while playing Coyote Cash is that it does a great job of capturing two different themes at the same time. First, the color scheme and graphics will make you feel like you’re in the American southwest. The background imagery is a flat, desert landscape with some mesas in the background; if it weren’t an illustration, it could easily be a photo taken somewhere in Arizona. At the same time, the graphics are mostly fun and cartoonish, complete with a cast of animal characters that includes the infamous coyote himself. Again, as we’ve said about many slot games from RTG, presentation clearly wasn’t the main point of emphasis when this slot was created. However, the game is easy to play and has a lighthearted feel, which is more than enough for a solid slot machine like this one.