Lucha Libre (Spanish for ‘free wrestling’) is a 5-reel, 25-pay line slot from RTG. Lucha Libre is the most popular type of wresting in Mexico. The wrestlers who compete all wear masks, and use speed and acrobatic techniques to overpower their opponents. The sport became massively popular in Mexico in the 1960s, so much so that Mexican film producers started making movies that featured the sport, making stars of wrestlers such as ‘Blue Demon’. There was also a 2006 film ‘Nacho Libre’ which starred Jack Black, but the less said about that the better. 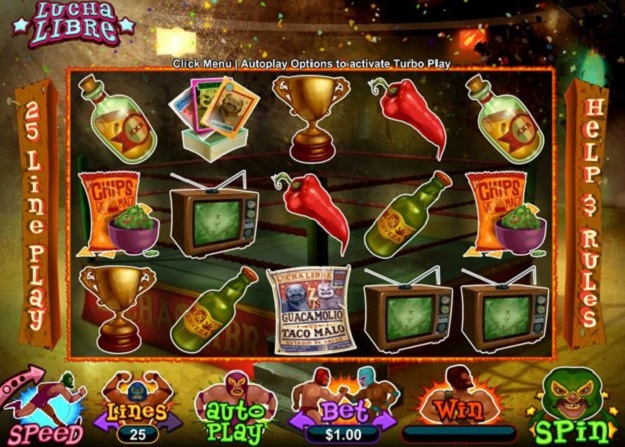 In this game the reels are filled with images from Mexican wrestling and items that are associated with the country, such as corn chips, chilis, beer and tequila. There are also a couple of wrestlers involved in the symbolic shenanigans, namely Taco Malo and Guacamolio.

There are a maximum of twenty-five possible pay lines, and all are selectable. You can choose your coin size from 0.25 to 6.25. Your total bet is your coin size multiplied by the number of lines you have in play. This gives you a range of bets from 0.25 to 156.25.

This game has an odd ‘speed’ feature where you can set the velocity of the reels. There are three settings you can choose from.

When it comes to pay-outs, there are a decent number plus several side features that make the game more interesting. The lowest winning payout is for three corn chips, trading card, chili or beer symbols at 5x your bet-per-line. The jackpot in normal play is for five commentator, prize-winning belt or trophy symbols at 1,000x your wager. You secure wins by landing at least three identical symbols in sequence from the left-hand reel on an active pay line.

Once you’re happy with your bet, get ready to rumble the reels by hit the spin button!

Wild Symbol: The two wrestlers – Taco Malo and Guacamolio – are grouped wilds on the central reels during normal spins and substitute for all other symbols aside from the scatter symbols. If the central reels ends up completely wild after a spin, all wins are doubled. Occasionally the wrestlers will jump onto other reels instead.

Scatter Symbols: There are two scatter symbols – the ‘Wrestling Ring’ and ‘Mask’ symbols. You only have to land two Mask symbols or three Wrestling Ring symbols anywhere on the reels to win a cash prize.

Time to Rumble Feature: If you land three Wrestling Ring symbols anywhere on the reels you trigger the ‘Time to Rumble’ feature. You get to choose from three wrestling moves – ‘Spanko Especial’, ‘Supremo Foot of Fury’ or the ‘Thunder Clap Bam Bam’ – in an attempt to beat your wrestling opponent. Win and you could gain up to fourteen free spins with a 2x multiplier and ‘Mask of Fiery Doom’ spins. Lose and you just get the free spins.

Mask of Fiery Doom Feature: These spins are played before free games. Masks are added to the first two reels, and a spin is awarded if they appear on reels one and two and three wrestlers appear on reel three. Up to four reels are held with masks in all positions. This gives the possibility of up to 81x scatter wins!

This is a wonderful game that’s extremely colourful and beautifully animated. The extra features are great as well, and add to the game’s excitement.

If there is a criticism, it’s that the wild symbols only appear on the central reel. It would be far nicer if they were distributed among the reels a little more evenly. The bonus features do not seem to occur all that often too.

A nice effort by RTG – a great slots game with just a couple of minor flaws. Why not take Lucha Libra for a spin and see if you can slam dunk some jackpot wins to the canvas?