Every kid knows exactly what happens when you hit a piñata hard enough: delicious candy comes spilling out, and everyone runs to grab as much as they can. Slot machines work in pretty much the same way, only dispensing cash instead of candies – and when you hit the slot machine just right, you get to keep all of the cash for yourself!

Jackpot Piñatas makes the most of this comparison, using the piñata theme to full effect in order to get players excited about the chance to earn huge rewards. Hit just the right combination of symbols, and you could burst open the machine to find a life changing jackpot falling right into your lap. 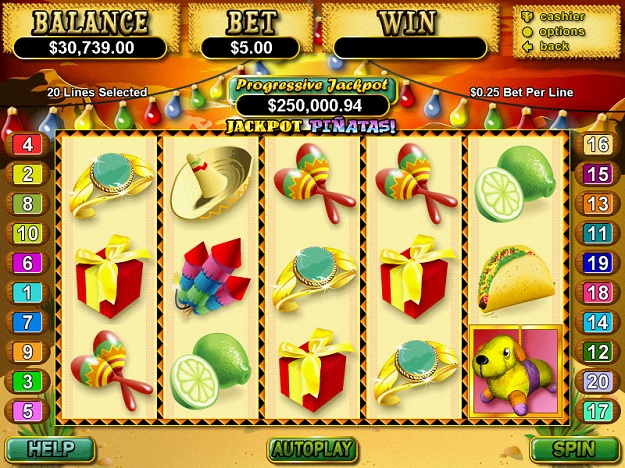 Jackpot Piñatas is a 20-line, five reel slot machine that can be played at most RTG casinos online. Players can bet up to a quarter on each line, making it possible to bet up to $5 on each spin.

The object of the game is to match identical symbols from left to right across your active paylines. Symbols range from Mexican foods to presents, fireworks, and dancers – all sorts of things you might find at a Mexican party. For the most part, you’ll want to hit at least three of a symbol in order to win a prize; in a few cases, only two symbols are needed to trigger a small win.

There are a total of nine different standard symbols on the reels, ranging from the lowly lime to the precious dancing ladies. However, the biggest rewards are all linked to the games titular piñatas, each of which acts as a different special symbol.

First, there’s the donkey piñata, which takes the role of a wild or substitute symbol. The donkey can be used to complete any normal winning combination, or can create wins on its own. In fact, even a single donkey is enough to earn you a prize, while hitting four or five in a row will grant you a huge prize.

Next up is the dog piñata. The dog is this game’s scatter symbol. Hit three or more dogs anywhere on the screen during a single spin and you’ll win a prize equal to a multiple of the amount you’ve bet on that spin. The more lines you play, the more your dog wins will pay out!

Finally, the bull piñata might just be the centerpiece of the entire Jackpot Piñatas experience. The bull offers some fairly large prizes for hitting three or four in a row, but the real excitement occurs when you hit all five on a single payline. If you’ve played the maximum bet on a spin when this occurs, you’ll win the game’s massive progressive jackpot.

There’s just one special feature in Jackpot Piñatas, but it’s one that often rewards players with some massive prizes. The Piñata Feature is triggered any time you hit three or more dog piñatas during a single spin. When this occurs, you’ll be given the opportunity to choose two of the three piñatas displayed. This will result in prizes being awarded; as with the scatter win itself, these prizes will be a multiple of the amount you bet on that spin, up to a maximum of 200x your wager.

It’s also possible that you will reveal a rose during this game. If this occurs, you’ll be given the chance to pick two piñatas again. The game will continue going on like this until you fail to reveal a rose.

But even then, the game isn’t over! At the end of this stage of the game, you’ll be rewarded with somewhere between five and 25 free spins. During these free spins, you’ll find more donkey and bull piñatas on the reels. In addition, all wins (except those featuring the bull) will be doubled, making these spins extremely valuable.

There are several major prizes available in Jackpot Piñatas. First, matching five donkey symbols will earn you 20,000 credits — a prize worth as much as $5,000. During a free spin, when prizes are doubled, this combination may be worth as much as $10,000.

But the real prize everyone shoots for in this game is the progressive jackpot. Hit five bulls in a row while playing the machine for the maximum amount allowed, and you’ll instantly win the progressive jackpot amount. This jackpot is usually worth several hundred thousand dollars; at the time of this writing, for instance, the game offered players just over $710,000 for the winning combination.

Theme and Presentation in Jackpot Piñatas

Jackpot Piñatas uses a Mexican party theme that is, of course, centered on the piñatas that offer the game’s biggest prizes. The graphics aren’t anything special, but they do enough to bring out the party atmosphere, especially when you score a win with the help of one or more piñatas. This starts a short animation in which a piñata bursts open, and a bit of Mexican music plays. While none of these touches make Jackpot Piñata anything comparable to, say, a 3D slot machine, it’s enough to give the game a little life and provide a fun atmosphere in which to play.