The X-Men have become one of the most famous superhero teams in comic book history. This team of Marvel mutants has not only battled both their enemies and the fears that humanity has towards them on the pages of the comics, but also in cartoons, video games, and a franchise of highly-successful films. One of the major ongoing conflicts faced by the X-Men is that not all mutants feel that they truly represent the way mutants should fight for their place in society – a conflict that comes to life in the Playtech X-Men slot machine. 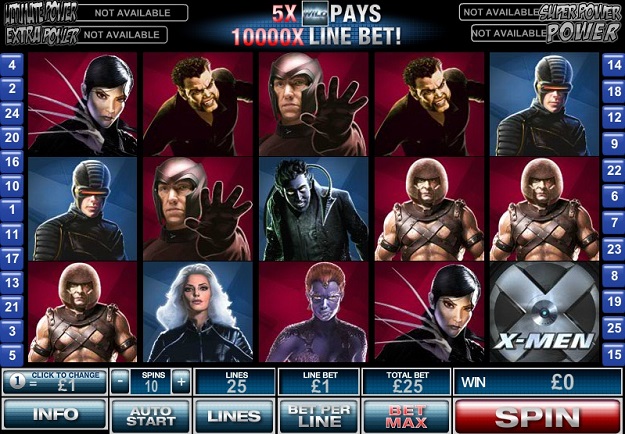 X-Men is an online slot machine that can be found at Playtech casino sites. This 25-line game allows players to bet up to ten coins per line, and the size of a coin can be adjusted to your tastes, typically starting as low as €0.01.

As in most slot machine games, your goal will be to match symbols from left to right across your active paylines. In most cases, it takes at least three of the same symbol in a row to score a win, though a couple of the higher-value symbols will win with just two.

The symbols in this game are representative of the heroes and villains in the X-Men universe. All of the heroes feature blue backgrounds, including characters like Cyclops, Storm, Nightcrawler and Wolverine. Meanwhile, villains like Juggernaut and Mystique are presented against red backgrounds.

The biggest wins are reserved for Professor X and Magneto for the heroes and villains, respectively. Hitting five in a row of either of these leaders will earn you 1,500 times your bet on that payline. There’s also a wild symbol that can substitute for any of the normal symbols, or win you up to 10,000 credits if you can hit five in a row. Finally, a scatter symbol will earn you a multiple of the total amount you bet on that spin if you can find two or more anywhere on the reels – up to 200x your bet if you can find five.

The X-Feature: If you should hit five hero symbols in an “X” pattern on the second, third and fourth reels, you’ll immediately earn a prize worth five times your total bet on that spin. This feature is only available in the main game, and not in the free games mode.

Free Games Feature: If you hit three or more scatter symbols on any spin, you’ll immediately trigger the free games feature on this machine. In this unique take on the free spins bonus, the game will begin in “heroes mode,” where the entire machine will be covered in only hero symbols and wild symbols. Best of all, players are given an unlimited number of spins in this mode.

The only way out of the heroes mode is by finding the single villain wild that is added to the third reel. Should that show up, you’ll be moved to the “villains mode,” which features only the villain characters and the wild symbol. Players only have eight spins available in this mode before the free spins feature ends. However, it is possible to get back into heroes mode if you can hit a Professor X wild symbol on the third reel. The free spins game only ends when a player runs out of spins in the villains mode.

Marvel Progressive Jackpot: Players can randomly enter the Marvel Progressive Jackpot game during any spin, though the odds of entering this bonus game are determined by the amount bet on each spin. Once in this game, the player will be presented with a grid of 20 squares. Choosing a square will reveal one of four progressive jackpot symbols: Power, Extra Power, Super Power or Ultimate Power. Once a player has revealed three of the same symbol, they will win the matching jackpot. The Ultimate Power jackpot is linked between many Marvel slot machines, and has awarded prizes of more than €1 million!